We leave our hotel in Khujand at 6.30am and by 7am it is 30 degrees!! Lucky we will be climbing over a couple of passes today so it should be cooler – we even have our sweaters handy. I have had butterflies about today’s ride for sometime: the thought of going through 2 tunnels over 5kms long, and a shorter but pitch dark one still makes me gasp for air. The other reason I have been stressing out about today’s ride is because Streak has been behaving eratically since we left Almaty: the engine just cuts out when running slowly. That means when slowing down for tight turns or traffic, at traffic lights, when pulling up to park basically at all those potentially awkward times. I just hope it doesn’t die completely inside one of those tunnels!!

I am relieved to say now that as of this afternoon, Streak has been fixed. More on that later.

The scenery over the 2 mountain passes over 3200 m altitude is breathtaking and the road is good. Traffic isn’t too bad, but it can be very slow at times as overtaking is a challenge and the number of broken down cars and trucks makes it interesting at times. It is no problem for locals who regularly overtake, ever so slowly, on blind bends. The tunnels were ‘interesting’ as one says!!! The first one, the Shakhristan tunnel was completed in 2012 and the famous Anzob tunnel, in 2016. That one used to be known as the Tunnel of Death. While it no longer warrants that title today as the road had been fixed, massive potholes filled, dim lighting installed and there are vents so you won’t die of carbon monoxide poisoning anymore, but it certainly did feel like the tunnel of death as we entered it: an old truck was just exiting as we arrived, leaving the entrance filled with thick choming fumes… I always let Anthony lead when going through tunnels as it makes it easier for me to follow – I find it quite disorientating otherwise. Luckily, we had heard of the pitch dark one and its cows!! Yes, cows live in that tunnel – they’re not silly cows, the tunnels are cooler than outside.

Typical road in this part of Tajikistan, cotton fields on the right 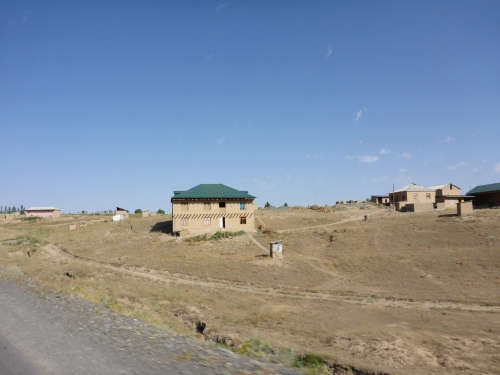 Why so many part built and boarded up new houses in this region?

Another broken down vehicule 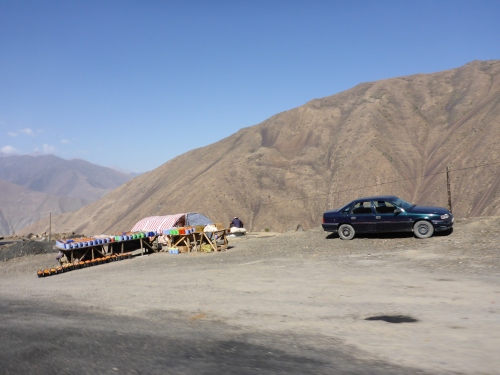 Fruit sellers on the pass 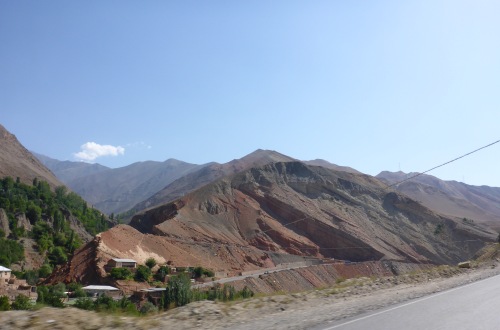 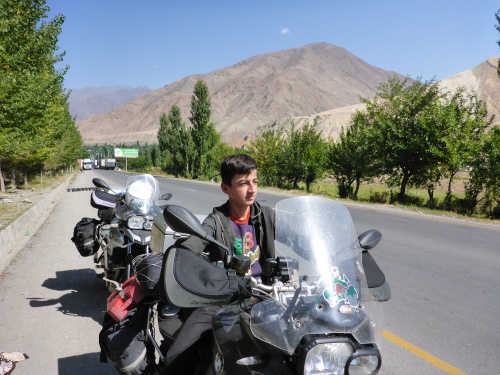 The dry apricot seller was proud to sit in Streak 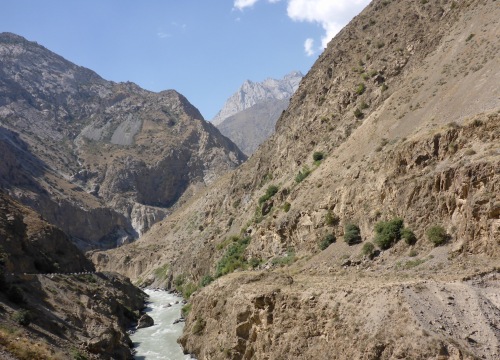 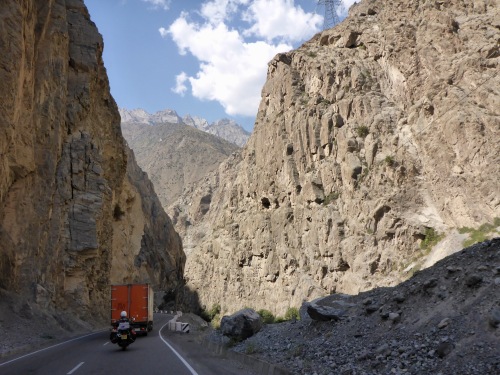 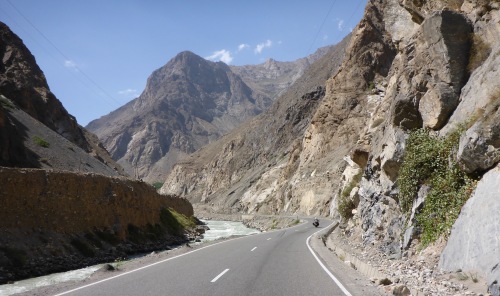 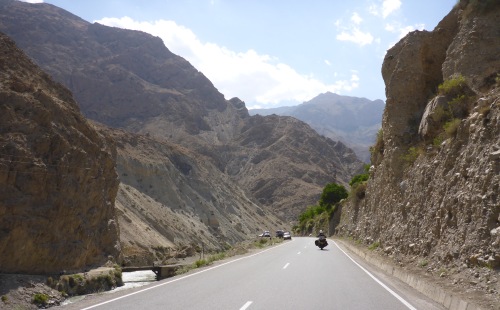 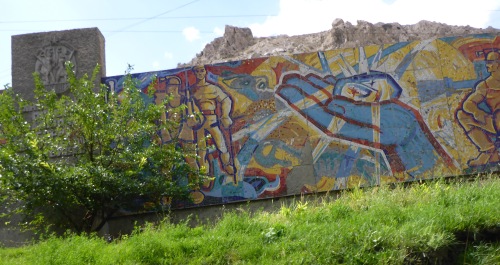 Part of another fabulous CCCP mural

Part of another fabulous CCCP mural 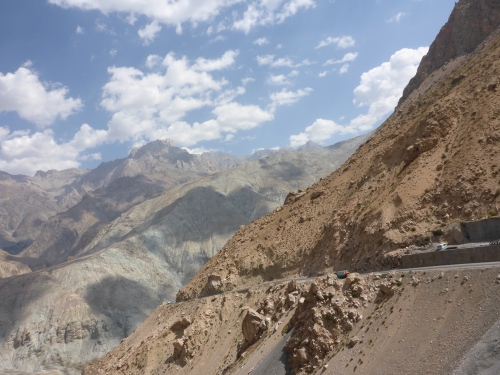 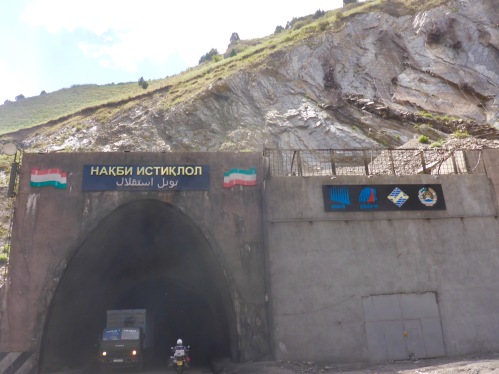 About to enter the Anzob tunnel – notice the fumes!

Getting through those 3 main tunnels was such a relief. I was so glad to make it to the otherside of them – my reference in my last post.

I made it through the 2 long tunnels!! 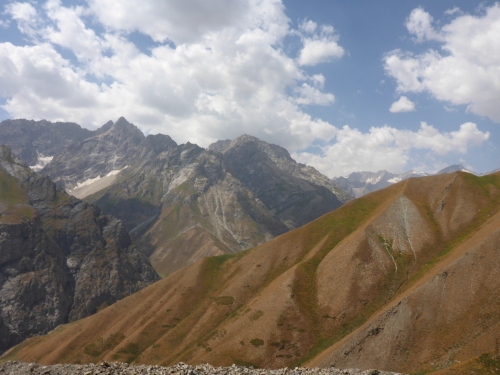 Must learn to take better selfies!

All the tunnels were much smaller and manageable. The scenery once again kept changing and was stunning. It was such a great ride. 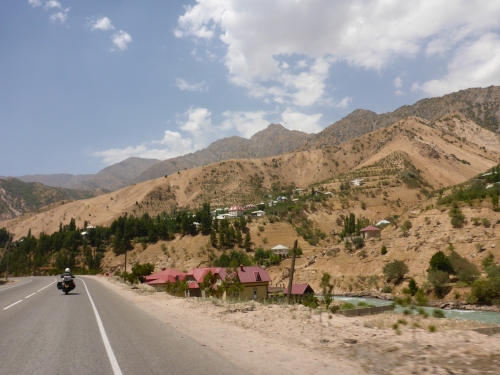 We get to our hotel in Dushanbe after our 300 km ride very hot and tired – the extreme heat takes a lot out of us. It only went down to 25 degrees at the high passes and we never needed those sweaters. We are told it must be over 40 degrees but the authorities don’t like to admit to such high temperatures. First priority is to cool down, shower, change and get some lunch. The restaurant “300 metres down the road” is really more like a kilometre each way. In this heat, it feels like a lot more. Fed and watered, it is time to look for a mechanic for Streak. We have two potential mechanics in Dushanbe – motorcycle forums are so full of helpful information! So we decide to get a taxi to take us to both. The first one we go to, Bike-House, we feel comfortable with straight away and decide not to bother to seeing the other but return first thing the following morning – we could not be bothered riding again that day so late in the afternoon!

When we get to the Bike House, Aziz get to work on my bike immediately. First thing he does is start it up – it dies of course which is great, there’s nothing worse than reporting a problem and finding you cannot duplicate it when you want to – and dies again as it should, perfect. He found 4 problems!!

1. A split air intake pipe
2. Cracked casing where the Scottoiler vacuum pressure pipe goes in
3. Pipe that had at sometime possibly been reinstalled twisted, we could see the small fractures
4. Faulty throttle sensor, very loose, we swapped with Anthony’s and tested ok

He and his colleagues made me feel good by their reaction when I told them I had ridden with Streak in that condition from Almaty, 1550 kms away. Going down the steep mountain pass hairpin bends required quite a bit of throttle and brake work together.

Aziz was fantastic. At one point we considered either trying to Fedex the throttle sensor part so wait however many days here for it, or just soldier on until Istanbul. But Aziz was not going to stop working until Streak was fixed. 4 hours later, Streak is fixed – with the throttle sensor, Aziz did a ‘Tajik’ fix!… – well enough anyway to move on. 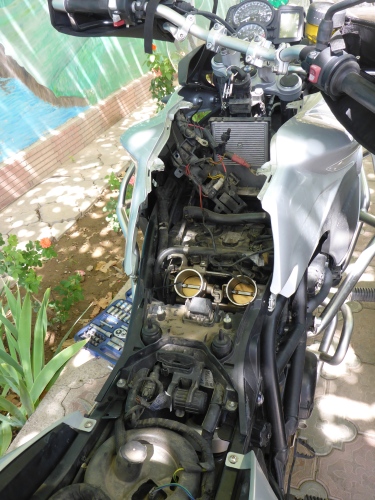 Streak being fixed at the Bike-House, Dushanbe

Ecstatic Aziz, aka Copperfield, and Anne

Riding Streak away from the Bike-House back to the hotel was wonderful! Streak feels like a new bike. I feel great. And drivers here are the best so far.

The rest of our time in Dushanbe is spent doing washing, downloading/uploading photos, shopping at the Sultoni Kabir market for empty containers to have extra fuel for crossing Uzbekistan which still has a bad shortage of fuel, visiting the Auchan hypermarket for more snacks, resting in the very comfortable Lotte Palace hotel (the best hotel on our trip so far) and best of all, making the most of good internet to call family. 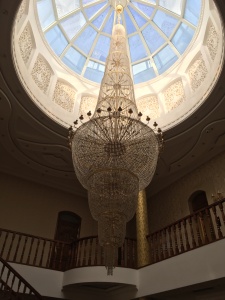 A chandelier in our hotel!! 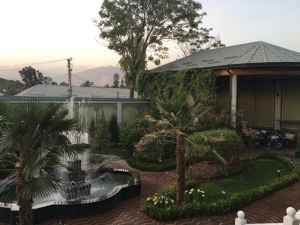 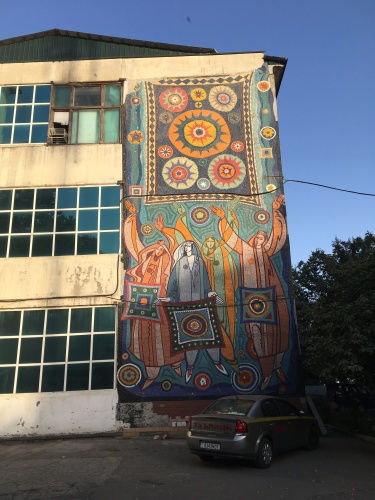 Mural on the side of a fabric factory next to our hotel, Dushanbe

Off to see our friends in Samarkand next – no idea how long that will take – all depends on the next border crossing. Til then, thanks again for all your comments!!