We are 2 Slow Speeds – Anne and Anthony Speed – from Brisbane, Australia:  there are 2 of us, our surname is Speed and on the only 2 organised travel trips we’ve joined, we have been nicknamed the “Slow Speeds”.  Once when we got left behind, in Antarctica, and then again when we were always last to arrive while crossing Bhutan, as we preferred to stop, take in the scenery and enjoy the local life to speeding ahead.

Welcome to our first ever blog, covering our travels from Europe around the world, via the Silk Route, Asia, onto South America and back to Europe, by motorcycle, 4×4 in Southern Africa and our current northern hemisphere adventure.  We hope you enjoy following us through our blog as much we expect we’ll enjoy our travels and experiences and no doubt challenges!!

How did this all start?

Mid 2013, we decided that we wanted to spend some quality time with our parents and family in Europe. While we had returned to Europe on an almost annual basis since we emigrated to Australia some 25 years ago, each trip brought great highs as we arrived then great lows as we departed, even if we spent a few weeks seeing family. As our parents were ageing and we had retired, this seemed the perfect opportunity to go to Europe for nine months and be able to see them all on a regular basis. During this planning process, we considered buying Royal Enfields in India and riding to Europe from there. The time of year, Indian Carnet and other issues made this a non starter, but the idea of a similar trip remained in the back of our minds as we made our plans to leave our home and head to Europe.

We also started to consider the idea of buying two bikes in Europe to Australian specification and bring them back to Australia. Much research and an understanding of the Australian Design Rules process showed that this was a forlorn hope. The regulations preclude this type of activity, except in the case of higher value bikes such as Harleys and BMW 1200s which are already on the approved list. Neither the BMWs or Triumphs we were interested in are and the cost in time and money to get them approved is prohibitive. A pity the option of bringing bikes back overland is not available. Still, we put a deposit on 2 demonstrator BMW F700GS on 30th January 2014.

Since we could not import the bikes back into Australia, the return to Australia became a RTW trip. The bikes will now be shipped to South America where we will ride up the west coast, through Central America, the USA and Canada then back to the UK in June/July 2015. Since making that decision, we also found out that the bikes could, not only, not remain in Australia, but could not be brought in for even a short period on a Carnet. Carnets do not apply to your country of residence!…

What started as an idea, grew a life of its own and became a fully fledged RTW trip. All we have to do is carry it out over the next 14 months.

Here is our 2 Slow Speeds logo, designed by Anne, on the iPad using ArtStudio: 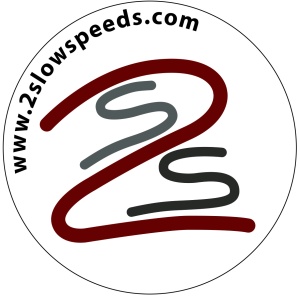 We got home in Brisbane 2.5 years after having first left but we could not settle down – the road was calling!! So we are off again. See our posts for information on where and how but in short, we decided to make the best of our circumstance: Anthony is slowly recovering from foot surgery from his accident in Argentina, so we are mixing easy road riding and 4×4 in South Africa, Botswana and Namibia for 4.5 months.

November 2016 update.  What a fabulous trip.  We spent a month riding from the UK to southern Spain via France before flying to Cape Town where we reconnected with old friends and rode Royal Enfields before picking up a 4×4 campervan to explore Botswana and Namibia. We hope you enjoy our trip posts. 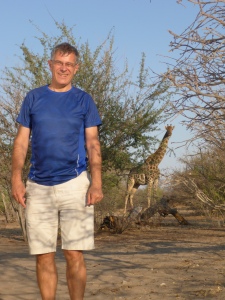 March 2017 update.  The original idea of spending time at home, redecorating, painting our place, doing something with our little patch of garden quickly turned into planning another trip!!  Another around the world trip, a northern hemisphere summer one where time and weather will dictate our progress and route.  The route broadly is to cross Europe, return to Iran and the Stans to visit friends we made on our last RTW trip, Mongolia, Russia, South Korea, Alaska and Canada.  But when we found a few stumbling blocks with timing, pricing, ramadan dates we switched our route by 180 degrees and are now chasing the sunset.  This trip now starts on 14th April in Montreal.