With our five day customs holiday, and the thought of two days waiting in the Ibis hotel at Delhi airport, we and Kristjan, who we are clearing our motorbikes with and is riding through Myanmar in our group, decided to head to Agra for Sunday and Monday and be back in Delhi for Tuesday morning and customs reopening. We considered for a second hiring a car, before common-sense prevailed and we looked at an Ibis travel package of car and driver, a hotel in Agra and a tour guide while there. Sorted in 30 minutes.

We have agreed that we will be ready to go at 6 am to avoid the traffic that builds up early in Delhi. Our 5 am wake up is far too early for me, as soon as I get in the car, I close my eyes and go to sleep. As we wind through the southern suburbs of Delhi heading for the ‘super highway’ to Agra. I am lucky to miss the learner driver doing 5km per hour in the fast lane, our driver falling asleep and other assorted incidents on the way. Sleep definitely is the best option for Indian travel, although it probably won’t work on the motorbike! The ‘super highway’ takes us swiftly from the crowded confines of the city, to the open plains south of the capital dotted with small fields, mostly cleared as we are well into the harvest season.

Anthony snoozing on our way to Agra

We stopped en route, and saw a group of five locals on 350cc Royal Enfield motorcycles. We rode the 500cc versions in 2009 when we rode in Eastern India and Bhutan. The only change seems to be that the gearbox and brake have now been switched to the normal side rather than the old British side when we rode in 2009. Our memories of that trip and the motorbikes are rekindled in our minds, as is the thought of being back on ,’Streak’ and ‘Storm’ next week. After three hours on the road, the ‘super highway’ comes to an end and the way to Agra involves a u-turn across traffic, the half built end of the freeway is just that, half built and probably been like that for a number of years.

We arrive at the first of three world heritage sites in Agra, the most in one city in the world?, and meet our guide Bobby. We are seeing first the Mausoleum of I’timad-ud-Daulah or the ‘Mini Taj’ which was constructed in six years between 1622 and 1628 and is believed to have provided the inspiration for the Taj Mahal.

It is an exquisite building and with few visitors – Anne wished she could have spent another hour quietly wandering around, but when your are on an organised tour, even for three of us, it is hard to know what we would miss if we lingered too long at one location. It is interesting to see architectural elements in the design that we have seen previously in our travels on the Silk Route. The builders, the Mughals, are believed to have originated in Uzbekistan and founded an empire that stretched at its height across the Indian sub continent from Afghanistan to Bangladesh. I have found it fascinating how the ebb and flow of cultures and empires across the region has shaped its history. I will certainly be reading further when we finally get home to understand how the mosaic of civilisations and empires across the countries on our route developed. If anyone can suggest books to read on the subject please let me know. 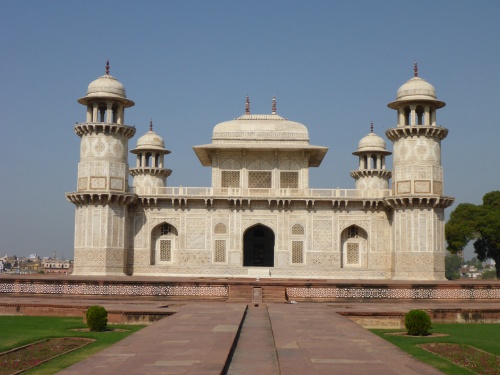 Ceiling above the tomb inside I’timad-ud-Daulah mausoleum, Agra, India

We are now going to the Taj Mahal, our car negotiates the noisy, weaving lines of traffic that seem to emanate from every street, dodge pedestrians and street hawkers, and our driver studiously avoids the cows that seem to know their sacred status and sit on the roads oblivious to all around them. 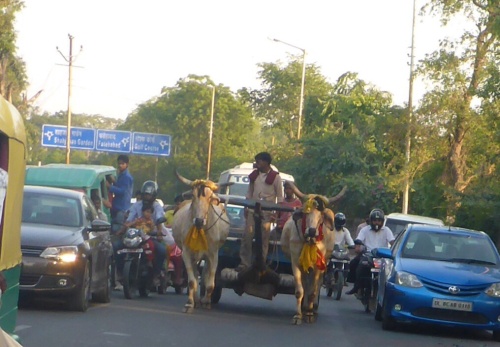 Families are out on this festive day, Agra, India

We get our first glimpse of the Taj Mahal, from a distance as we wend our way through the streets of Agra, which we have learnt has a population of three million. I cannot recall the population of India say 30 years ago when we were backpacking in Africa and Asia, but I imagine that it was significantly smaller and less mobile. Those who visited India that long ago will have to comment on that.

October, as those who know India is festival month, we are seeing on our drive towards the Taj Mahal, trucks with speakers front and back blasting out music and followed either on foot or in trucks by people covered in coloured powder. They are all happily dancing, although we are told alcohol is involved. 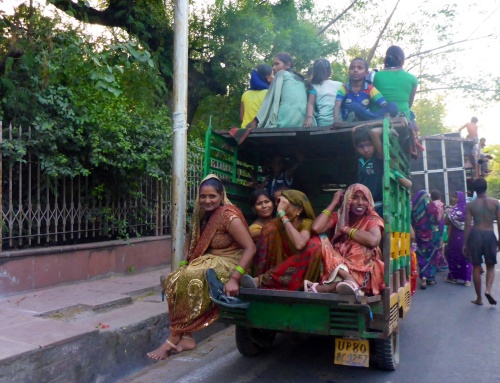 It is festival time in October in Agra, India

As this is a public holiday, we move with hundreds of local people towards the entrance to the Taj Mahal. Tuk tuks, small three wheeled taxis, and camels pulling carts vie for customers from the throngs of people walking towards the entrance which is about one kilometre from the mayhem of the drop off point. We reach the entrance and find hundreds of locals in the ticket queue, luckily as foreigners, paying about ten times the local fee have a special ticket office, and express path to the entrance, which allows us to pass hundreds of locals. We are told that they expect over 100,000 people to visit the Taj Mahal today as it is a public holiday and the Muslim festival of Eid. 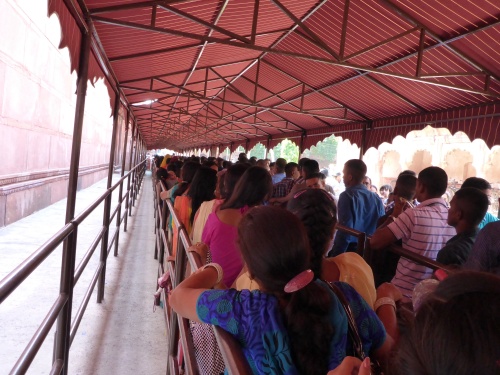 The tourist queue on the left, local ones on the right

Our first view of the Taj Mahal in all it’s glory takes one’s breath away. It is more spectacular in the ‘marble’ than photographs do it justice in my view. We enter the gardens through a red sandstone archway that has framed millions of photographs. Strolling through the gardens, getting ever closer, we take the fast stream again and we are there! I will let Anne’s pictures do the talking. I am glad that we came here as this had been something I had said, if we were ever his way, I would like to see.

Eastern gate to the Taj Mahal, which we can just see in the distance

The marble used comes from India and is the hardest in the world. This makes it impervious to stains, even beetroot unlike some kitchen counter tops. Not ours at home which is just Formica made to look like marble. The inlays used come from a variety of sources including onyx from Belgium for the black, cornelian, jasper, lapis lazuli and topaz from regional sources. 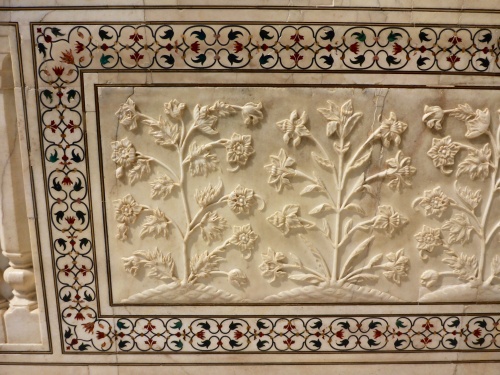 Given the hardness of the marble, it is a difficult material to work with and we were told during the subsequent and obligatory craft shop visits that those involved in the process of making marble inlays have a working life of about twenty years due to the toll that the hard material takes on their hands. Of course no retirement follows, just another job.

Our guide tells us that no factories are allowed in Agra, and that the people here have to make their living by primarily by tourism and handicrafts. To compensate for the loss of industries, no tax is levied on any handicrafts thus providing an additional selling point for the keen salesmen as they show their skilled craftsmen working. While nothing caught our eye, if any of you are in the market for a new marble12 seat dining table, a snip at USD $25,000 with two marble table legs and free shipping just drop me a line.

The craftmanship in Agra was impressive. This white marble table with various semi-precious stone inlays is backlit to great effect

The last place we visit is the Agra fort, built of red sandstone it is the third world heritage site in Agra. Here the builder of the Taj Mahal was held under house arrest by his son in his latter years, probably to stop him building a black Taj Mahal for himself across the river from the white one was he built for his wife. He has buried alongside his wife. 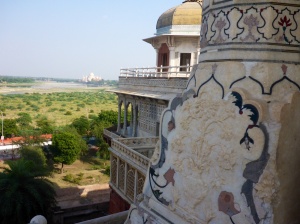 Muassaman Burj tower, where Shaha Jahan was banished to after being deposed by his son, and could see the resting place of his beloved wife in the Taj Mahal, Agra, India

We were at the Taj Mahal, Agra, India!!! Waiting for the sunset…

Sun serting on the Taj Mahal 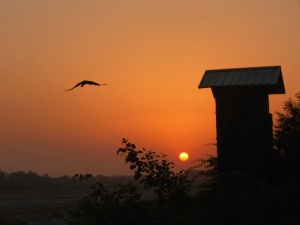 A day full of interest and learning for us.