As those who have followed us know, I have an interest in street art and wherever we’ve travelled, street art has provided us with an interesting insight into local life, its struggles, beliefs and hopes – its heartbeat. This road trip to Melbourne in early March has provided me with a feast from day one.

Just two hours after leaving home, we come across Moore Trailers warehouse in Pittsworth, SW of Toowoomba and their 100m long mural celebrating all things and people important to the region. Arthur Postle, born 1881, a professional runner nicknamed the “Crimson Flash”, who set 5 world records, died in Wynnum, the subburb next door to us, in 1965. Pittsworth confectionary, a family owned business. The 84 ANZACS born in Pittsworth, including too many sets of brothers and a father and son. And of course, all things related to farming, agriculture and life on the land.

Millmerran is a small town of approximately 1,500 inhabitants which lies on the flat, fertile black soil plains to the west of Toowoomba. The likely origin of the name is two local Aboriginal words – “meel” which is thought to mean “eye” and “merran” which is a verb “to look out”, probably referring to a nearby lookout which was used as a viewing point by the local Aborigines from the Keinjan language group. The first Europeans arrived in the area in 1841. It prospered in the 19th century through mainly wool and sheep, changed to dairying during the early 20th century which saw the development of 2 cheese and butter factories and today engages in mixed farming with sheep, cattle, cereal grains and cotton dominating.

The Millmerran water reservoir mural was commissioned in 1988 and celebrates its history and the early days of transporting water. 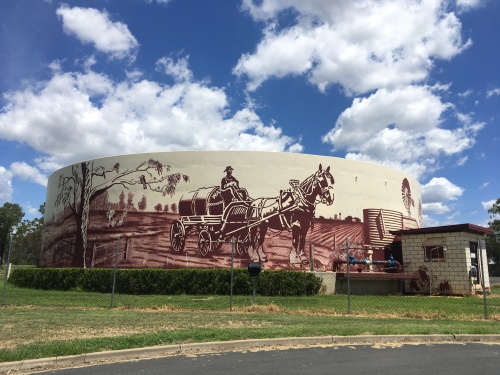 Onto Goondiwindi – pronounced ‘gundawindi’ – I love that name! But had never looked into it’s origin before. Prior to the arrival of Europeans in 1827, the area was occupied by the Bigambul Aboriginal people. One of the early settlers, who had arrived in the 1830s, named a property ‘Gundawinda’ which was a Bigambul Aboriginal word for “a resting place for the birds”. There are other authorities which claim the town’s name comes from “goona winnah” meaning “duck droppings “. Goondiwindi is now a small town of approximately 6,000 people, on the border between Queensland and NSW.

A cheeky take on Australia’s Coat of Arms, Goondiwindi, Qld

The Macintyre River with its water birds, reeds and the bank at sunset, water tank, Goondiwindi

In 1956 Edward Vernon Redmond, engineer to Goondiwindi Council, submitted a flood prevention scheme for the town. He and his foreman Bill McNulty had survived the flood by boat – marking the height on trees. The levee banks that he designed have saved Goondiwindi from major flooding ever since.” Up until then, residents used to gather under this tree and exchange flood stories and speculate on the time the next flood would reach the town. The Tree of Knowledge sculpture was created in commemoration of this time.

Next stop, Dubbo. Evidence of habitation by Wiradjuri Indigenous Australians dates back over 40,000 years. Explorer and surveyor John Oxley was the first European to report on the area in 1818 then the first British colonist settler in the area, Robert Dulhunty, arrived after 1829 and chose grazing land which he named ‘Dubbo’. It is believed to be a Wiradjuri word meaning either “cap”, “head covering” or “red earth”.

Melbourne artist Matt Adnate was commisioned in 2016 to paint this magnificient 6 meter tall mural of Pearl Gibbs, a passionate Aboriginal activist, and Dakota, a local young child who symbolises a positive future. Pearl Gibbs lead a remarkable life campaigning for Aboriginal rights, her work too extensive to do it justice in just a few sentences here – have a read of this: https://en.wikipedia.org/wiki/Pearl_Gibbs 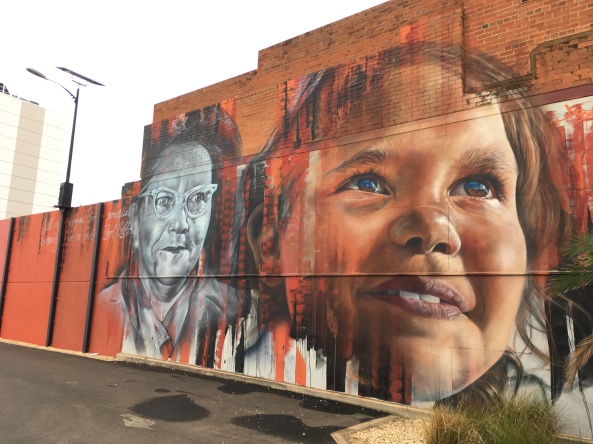 Then we arrived in Hay, NSW. I fell in love with this small country town, population 2,500, not because of the surrounding beauty of the land, which is flat as far as the eye can see (or maybe because it reminds me of northern France where I grew up) but because the town instantly felt loved, cared for and proud. And we met Craig which added the all important human connection. We didn’t know anything about Hay when we arrived but decided to pull over and have a mid morning break and tea/coffee there before exploring. Every block was a visual and historical surprise. It is only when writing this blog entry that I discovered there is a documented heritage trail available online with 18 places of interest. Hay was named in October 1859 after a local squatter and politician, a Secretary of Lands and Works, named John Hay who was later knighted and became Sir John Hay. Because this post is primarily about street art, you will have to read up https://www.visithay.com.au/Explore-and-Discover/History-Heritage or better still, visit Hay yourself. 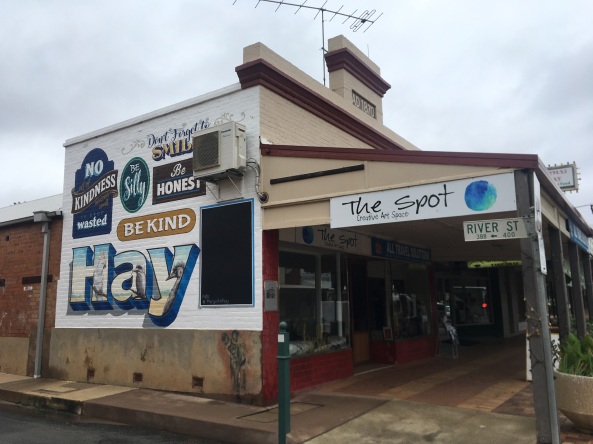 Four days after leaving Brisbane, we arrive at Sea Lake, Victoria, where my feast of street art truly begins. 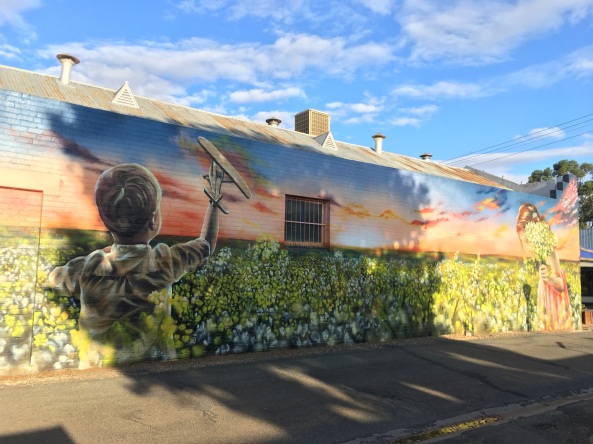 Stitch the dog, by DRapl and Zookeeper, Seal Lake

Great murals, but this is not what we came here for. I had heard of the Silo Art Trail in Victoria and seen pictures of the old grain silos but it is not until you get up close and personal that you truly comprehend the scale of this art. The Silo Art Trail is Australia’s largest outdoor gallery. The trail stretches over 200 kilometres, linking Brim with neighbouring towns Lascelles, Patchewollock, Rosebery, Rupanyup, Sheep Hills and Sea Lake. The art and concept of bringing life back to decommissioned grain silos became such a success after the first silo was painted in Brim in 2016, infusing the community with newfound energy and optimism, that the Silo Art Trail began.

We start with the latest addition to the Silo Art Trail. We were lucky that the owner of the accommodation I chose for the night in Sea Lake, Julie, was directly involved in the commisioning of the artists for this silo artwork and was happy to share its history with us. Brisbane based artists Travis Vinson (DRAPL) and Joel Fergie (The Zookeeper) wanted to capture the beauty and grandeur of the Mallee region, in particular Lake Tyrrell. But it was important to Julie and others to capture the Aboriginal connection to the area. The little girl on a mallee eucalyptus swing refects on her aboriginal heritage, looking towards Lake Tyrrell, moving between the past, present and the future.The Boorong Indigenous name ‘Tyrrell’ means ‘space opening to the sky’ – the Boorong People were known to have more knowledge of astronomy than any other tribe,

Julie also told us about a phone app on the silos – pity our mobiles didn’t have reception in those areas to make the most of the technology. The virtual reality app is called Wimmera Mallee Tourism.

Sea Lake Silo, Drapl and Zookeeper, Vic – can you spot me?

Anthony often bemoans how he keeps being told to reduce his waistline in no uncertain terms: 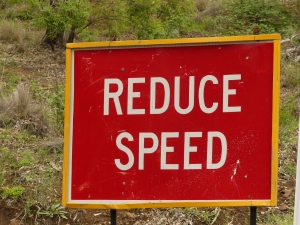 Anthony wishes they would stop going on about his waistline!

This Speed sign on our way to Patchewollock though brought a smile on our faces – a village named after us?!

Brisbane artist Fintan Magee booked a room at the local pub to get to know the Patchewollock community. When he met local sheep and grain farmer Nick “Noodle” Hulland, Fintan Magee knew he had found the perfect subject for the 35 metre high canvas of the twin 1939 GrainCorp silos: he was the perfect rugged, lanky local who exemplified the no-nonsense, hardworking spirit of the region. I particularly love Hulland’s evocative expression which reflects the challenges of life on the land here, as he squints under the harsh Australian sun. 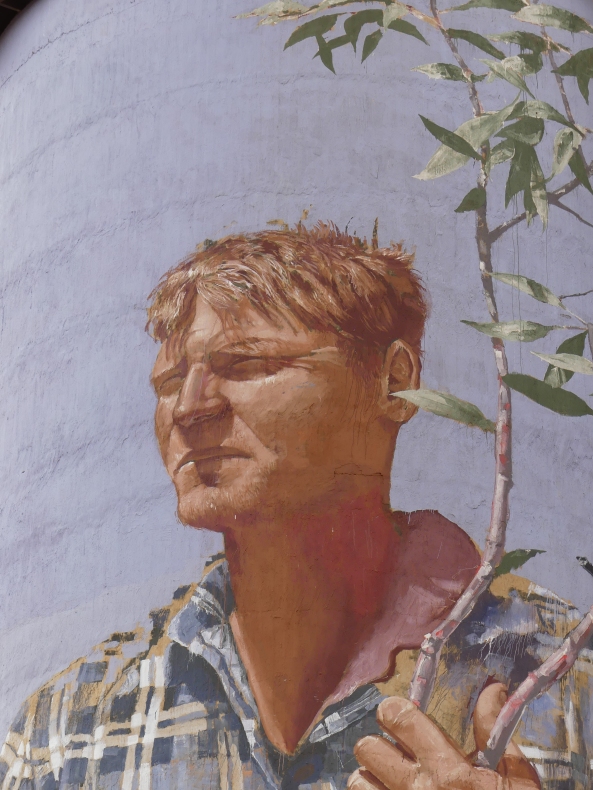 Like Fintan Magee, Melbourne-based artist Rone wanted to capture the true essence of Lascelles so spent time in this town of 100 people in mid 2017 before taking 2 weeks to transform the two 1939 decommissioned grain silos. He chose a local farming couple Geoff and Merrilyn Horman, part of a family that has lived and farmed in the area for four generations. Rone says that he “wanted the mural to portray his subjects as wise and knowing, nurturing the town’s future with their vast farming experience and longstanding connection to the area.” The peaceful, contemplative gaze depicted in this artwork moved me – I saw warmth, strength of character, wisdom and the fragility of life at the same time.

Renowned Melbourne street artist Kaff-eine spent time with Rone when he was working on his Lascelles project. She too travelled around the area, meeting and connecting with local business and farmers before completing her silos in Rosebery in 2017. The character on the left represents today’s generation of young, strong female farmers. The one on the right represents a contemporary farmer showing the connection between him and his trusted companion.

Brim
This is where the first silo was painted, before the concept of the Silo Art Trail was even contemplated. Guido van Helten was born in 1986 and raised in Brisbane. We first came across his work when we visited Reykjavik in 2018 and I was blown away by the quality of his artwork – https://2slowspeeds.com/2018/02/28/reykjavik-the-peoples-voice/ so I was extremely excited to see his artwork on an even bigger scale here in Brim. Guido completed the artwork on the 30 meter tall silos in early 2016, with minimal funds. To this date, we do not know who those people are. Guido said in an interview that he wanted the mystery to remain as he wanted the artwork to be about the community and the Wimmera region as a whole rather individuals. He also feels that anonymity enables us to have our own connection to the work. I like that concept. It somehow made me look at each character in more detail. This work conveyed the harshness of life and of the environment on those people we rely on so much for our daily food.

Adnate spent 4 weeks in the community of Sheep Hills in 2016 to conceive and complete this silo. Adnate’s depiction of Wergaia Elder, Uncle Ron Marks, and Wotjobaluk Elder, Aunty Regina Hood, alongside two young children, Savannah Marks and Curtly McDonald celebrates the richness of the area’s Indigenous culture. The night sky represents elements of local dreaming and the overall image signifies the important exchange of wisdom, knowledge and customs from Elders to the next generation. 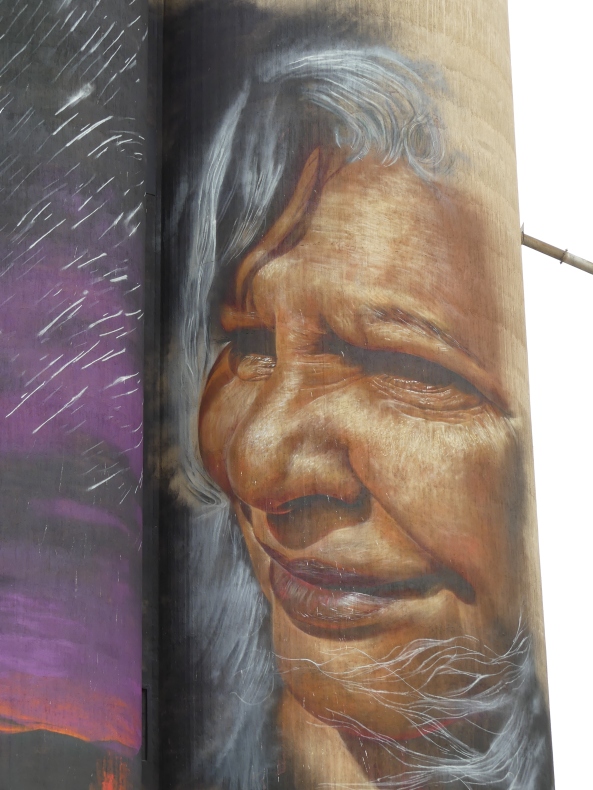 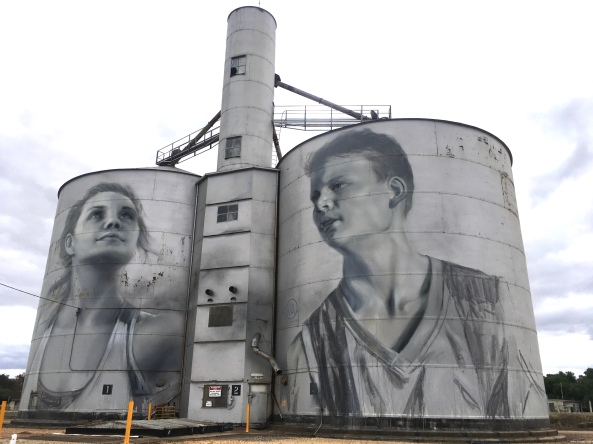 I’m interested in hearing what your favourite silo is and why. Ok, you can have 3 favourites because I have 3: Sea Lake, Lascelles and Sheep Hills. And I loved Patchewollock too. Oh, and Rupanyup! Is it because all those represent real people? And Brim was very special, maybe because it left so many questions unanswered. That makes it 6 out of 7 favourites!! Ok, back to my original question: which is your favourite and why?

At the end of day 4 of our little road trip, we get to St Arnaud, a small town rich in restored houses and street art, our last stop over for the night before getting to Melbourne. 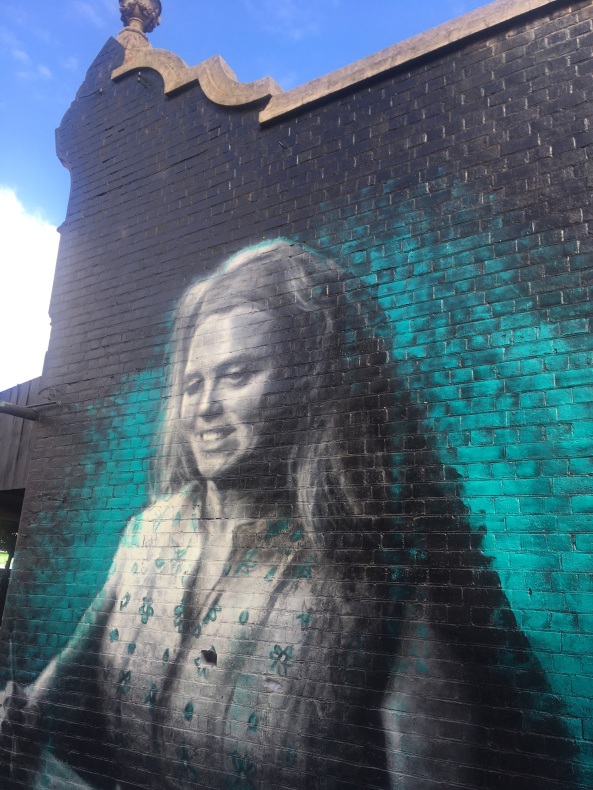 Melbourne is famous for its street art but our visit there is purely to catch up with a few friends before boarding a ferry to Tasmania to deliver the vehicle. We did get to see these though – in just an alleyway in Brunswick, Melbourne. 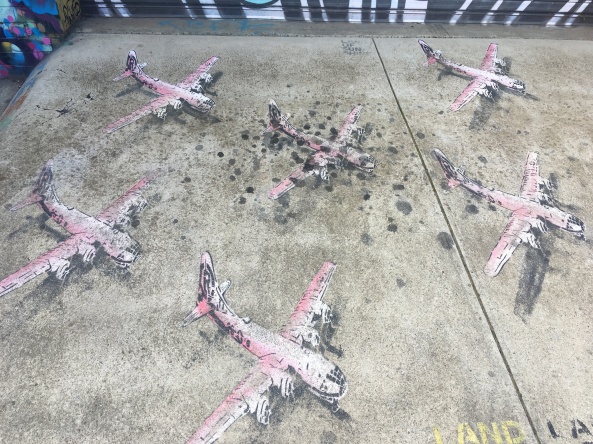 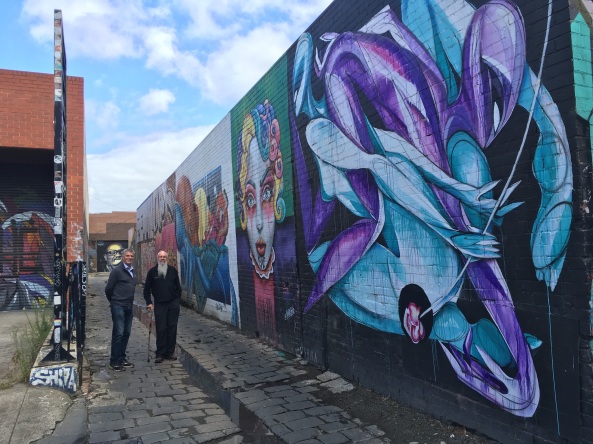 There are so many silos and water tanks painted by different artists all over Australia, this was just a small introduction. When Covid-19 isolation is over, it would be great to go on another trip and discover some of Quensland water tanks. We’re so glad and grateful we managed to make this trip. Stay safe everyone!!