As our train pulls into Glasgow Queen Street High Level Station, I reflect that I know almost nothing about the city. My knowledge of Glasgow is limited to secondary school geography from the 1960’s and a quick scan of the web last week to find something of interest for Anne of a cultural nature in what was once a major industrial city. At least I now know that there is a high and a low level station, my knowledge is improving.

We walk out through the station, which is a construction site, and into a city that surprises me with its magnificent Victorian architecture. I am struck by the number of buildings that have survived from the Victorian/Edwardian eras that line both sides of the streets including the impressive Buchanan St which has been turned into a pedestrian mall lined with shops. Each building front has such detail: sculptures, columns, towers. The Industrial Revolution funded the work and architects Charles Mackintosh and Alexander Thomson were influential in shaping what we see today. We wander through the city sensing a vitality and energy from those around us. On our walk to our hotel we learn that it does have a hill and step streets in places!

Typical mix of architecture and magnificent buildings in Glasgow 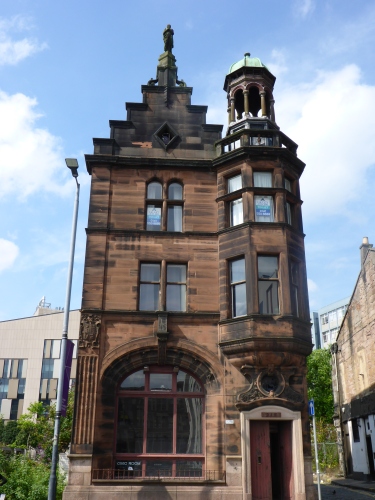 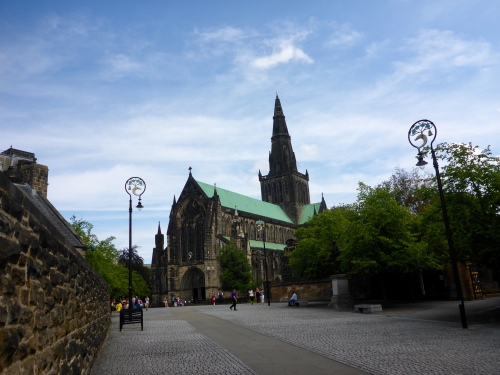 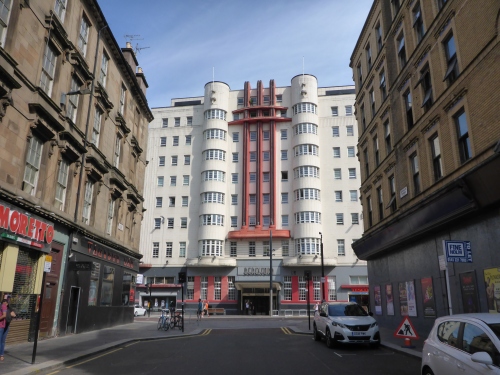 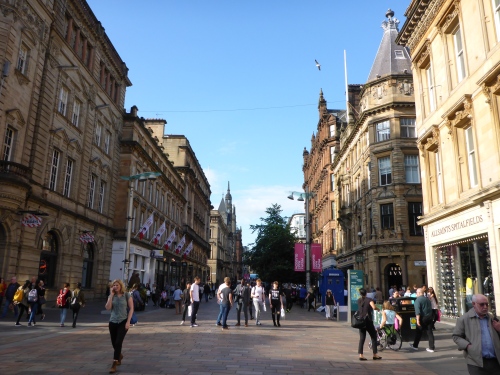 We do notice a number of people sleeping rough and begging, empty shopfronts on some streets, rubbish in alleys. We are seeing a grittier edge to the city. Since this is our first European city we have visited for some time, we cannot judge it this is normal for cities or an aberration. It certainly is in contrast to the positive feel we have of the city in general. 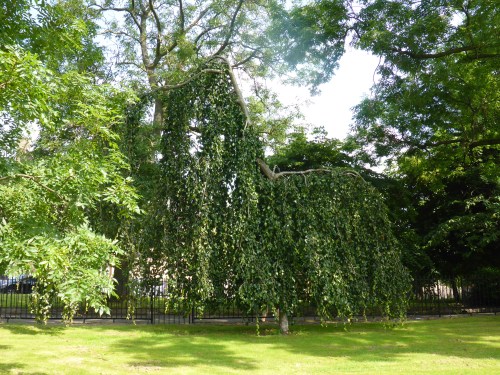 As you will have seen from Anne’s post on street art in Glasgow, the fourth in the series following those on Malaysia, Santiago and Reykjavik, there is an amazing variety of work on display across the centre of the city, as usual in so many odd and unexpected places. Our search is quite interesting as we do not know if the paintings we are looking for are one meter or 20 meters high. It does take our first day exploring to find both those on the offical lists and quite a few unexpected new additions.

Having come from Edinburgh where a number of the older buildings are still covered in grime from previous centuries, I am taken by the high number of ‘clean’ buildings revealing the greys, reds and whites of the original stone. I learn that the cleaning process was undertaken by spraying a latex solution on the building’s surface which, when pealed back 24 hours later, removed the black grit built up during the coal based industrial period. This was first trialed on the Kelvingrove building which is now the Kelvingrove Art Gallery and Museum which is home to a painting that Anne has loved for many years but had no idea of its home, neither did I.

“Christ of Saint John of the Cross” by Salvador Dali was purchased for Glasgow Corporation in 1952 by Tom Honeyman, then the Director of Glasgow Museums. It was a controversial purchase at the time with art students protesting that the money could be better spent on local artists. I am fairly certain their views would have changed today. As I have mentioned previously I love finding a single classic painting in a small collection such as “Luncheon of the Boating Party” by Pierre-Auguste Renoir at the Phillips Collection in Washington D.C. which we saw in 2015 on RTW1.There is a great range of art and local history at the Kelvingrove Art Gallery and Museum and kids are well catered for.

Dali’s Christ of St John of the Cross, Glasgow

We have enjoyed our time here, enjoyed the vibrancy and humour, walked 10kms a day, but there is more to see so if we pass this way, we will visit Glasgow again and explore further. How many other underestimated cities are out there for us to find?

Glaswegian sense of humour: The coned Duke of Wellington statue outside GoMA, Glasgow 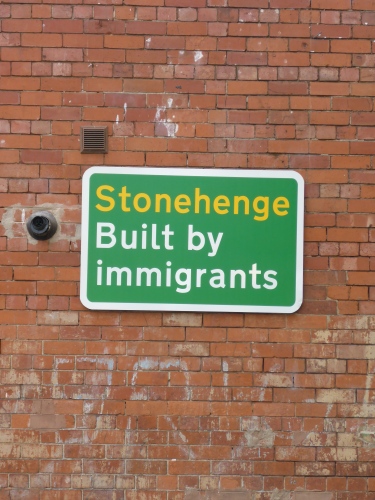 The things you do on your Buck’s night

Let’s ride the streets of Glasgow

Part of the joy of discovering new places is to meander without any fixed itinerary, and taking the time to notice and enjoy the place’s smaller details that make up life there, taking in the atmosphere and talking to people. The beauty of street art is that you find it in the most unexpected places, often returning life to what were run down or dingy areas – it invariably puts a smile on my face due to either its message or humour, often both.

Glasgow has been a revelation to both of us but this post is solely about its street art which has been fun finding.

The most impressive mural to me is the one by Smug, Sam Bates, in what was once a delapidated car park, depecting all sorts of local ‘residents’ found in parks and green spaces, as if appearing through cracks in the wall, throughout the seasons. The longer I spent looking at it, the more detail I found, right down to the identical reflection of the church facing the wall in the squirrel and wolf’s eyes and the berry on the ground which the blue tit is eyeing. 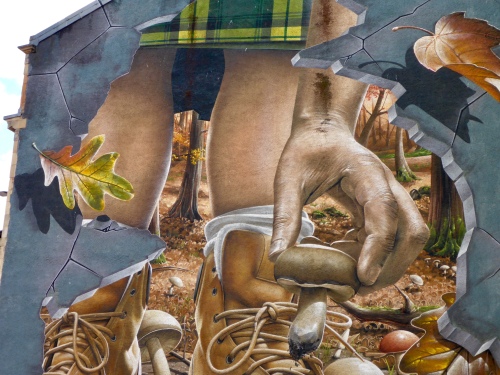 Close up of Autumn

This fun one of a taxi floating at the end of a bunch of colourful balloons is so detailed, the artist, Rogue-One, even painted the bricks onto the brick wall! Thank you to all the drivers who stopped to give me space to step back and photograph this taxi in the narrow lane way. 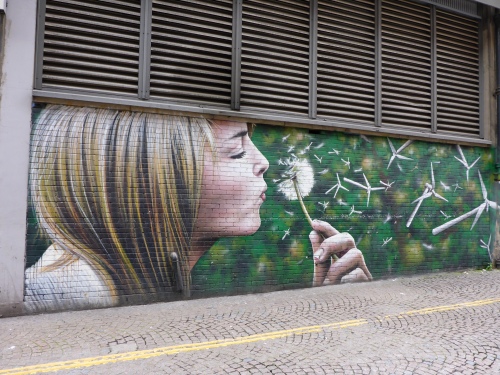 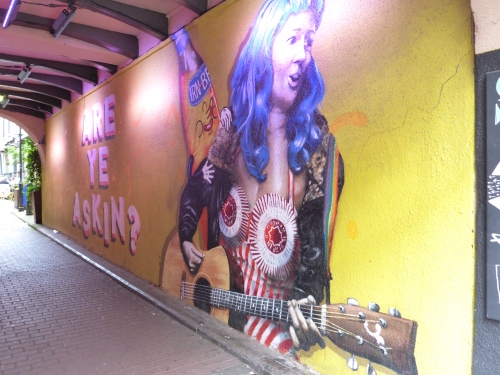 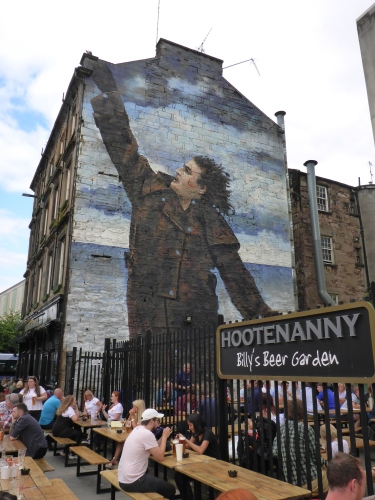 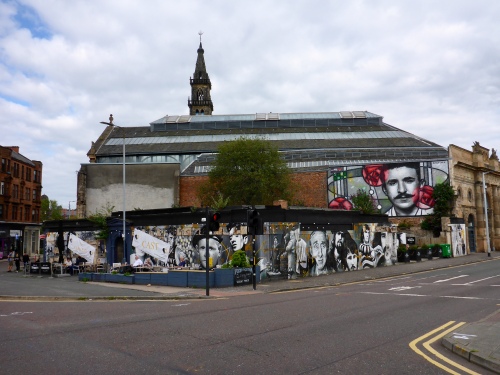 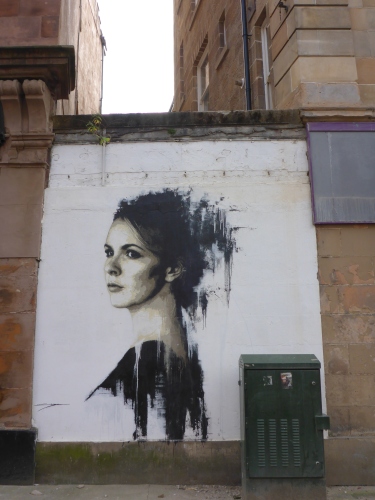 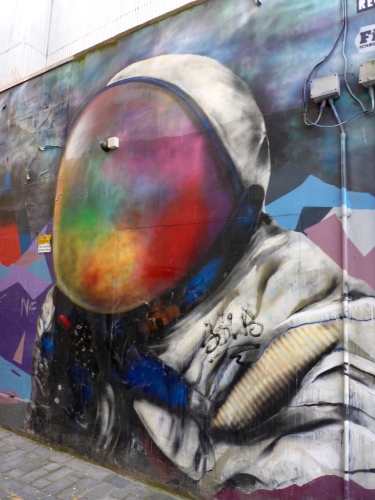 Badminton player Kieran Merrilees as part of the 2014 Commonwealth games 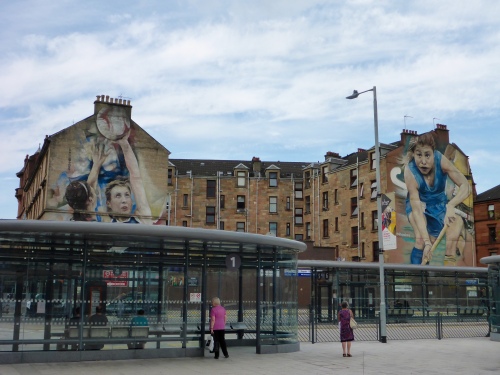 Part of the 2014 Commonwealth games, outside Partick train station, Glasgow 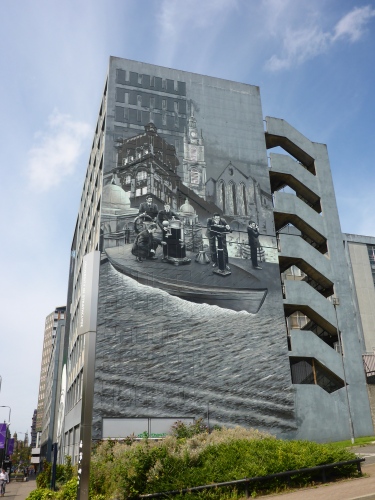 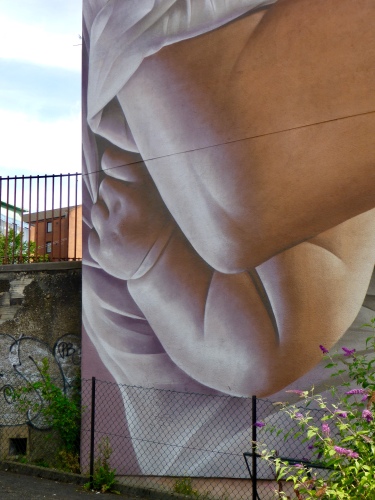 Close up of Mungo clutching his mother 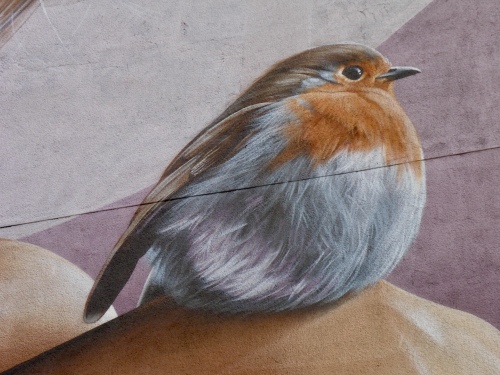 Saint Mungo’s robin which he brought back to life

A history of transport mural 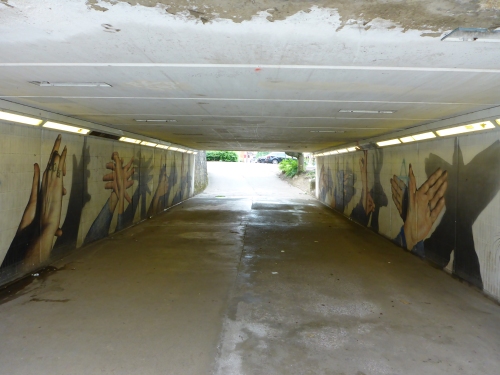 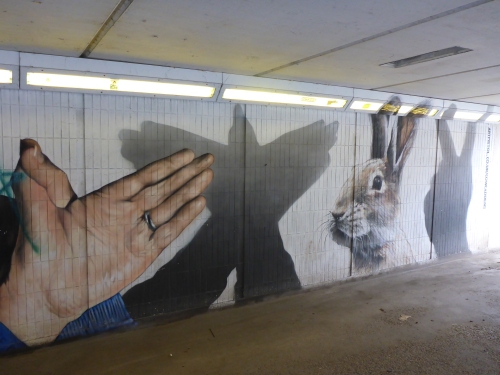 I always love looking back when visiting a place or travelling generally, as it gives a different perspective or at times reveals a new mural. I wonder which mural will turn out to be your favourite.

If you enjoy street art too, I wrote blog posts on street art in George Town – Malaysia, in Santiago – Chile and in Reykjavik – Iceland.