Malta I believe is the only country to have ever been awarded a medal for valour, the George Cross in April 1942, for the Maltese people’s fortitude during the repeated bombing attacks on the island during the Second World War in 1941 & 1942. As we approach the airport in high winds, the sea appears to me to be iced over, the white waves looking all the world as the white streaks one sees sometimes in river ice.  This is part two of my birthday treat and the 102nd country we have had the privilege of visiting.

We are whisked away from the airport by a skilful taxi driver who darts through the myriad of roundabouts in what we perceive to be a Maltese style of driving where those on and off the roundabout merge seamlessly regardless of who has priority. Another new driving style for us to contemplate.

Our first impression is that the island is constantly under a building construction assault, cranes abound and new buildings appear to rising everywhere, sometimes shoehorned between the existing more dilapidated structures. Building maintenance does not seem to be a high priority here, perhaps the buildings’ owners have an eye to the future, demolish and build bigger. Having spent part of the summer in the wide open spaces of Iceland, we feel hemmed in and a little claustrophobic.

As we approach our hotel, we are struck by the cables, I presume communications, not power that are draped from building to building around the first floor level. No nice internal plumbing here.

Our hotel, the Malta Hilton, a very luxurious location for my further birthday celebration, is situated in St Julian, situated just north of the capital Valetta, but close enough for us to walk and then catch a ferry from the suburb of Sliema into the city of Valletta.

As we motor towards the imposing skyline of the city past a couple of multi masted sailing ships, I am struck by how this view would probably have changed little in hundreds of years. The imposing walls, fortifications and church towers greet us as we arrive in Valletta.  We wander the streets taking in the history and beauty that this city offers. Blue skies and sunshine make this a great change from the cold we have experienced as winter arrives further north.

There is such a scarcity of open space that we resort to walking along the coast towards the old firing ranges at Pembroke.  Here we find open space, plants and wildlife, plus the old warning signs about red flags and range in use.  Panoramic views to the sea are probably protected by old unexploded ordinance that keeps the developers at bay.  We do stay on the paths, no bundu-bashing here. We make our way to towards the Madliena Tower, one of many fortifications built along the coast.

On our walk back, we stumble across another grand old abandoned building and immediately notice the Australian crest. After some research, Anne found out that the Australia Hall was a former entertainment hall built by the Australian Branch of the British Red Cross Society in 1915 as an entertainment hall for wounded soldiers. The building mysteriously burnt down in 1998 and was subsequently sold for one tenth of its value… Our uneasiness around property development practices here grows. 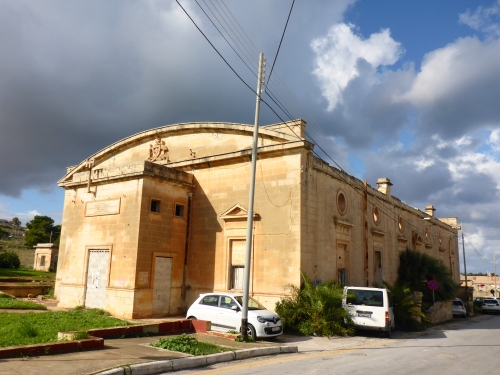 To get a better picture of the country, we decide to take a hop-on hop-off bus trip around the northern part of the island seeing Balzan, Mdina, Mtarfa and Bugibba.  We spend most of our time in Mdina, a beautiful city with great views back towards Valletta.  There is not much free land anywhere on the island, either buildings or farmland.

I have always been interested in reading the local newspapers to get a feel for what are the issues that the press and perhaps the people have an interest in.

Malta as been in the world news recently, before and after our visit, with an arrest in relation to the death in 2017 of Daphne Caruana Galizia who was assassinated by car bomb. She was an outspoken critic of both government, opposition politicians and those in authority. She raised her questions about accountability and transparency and what is referred to as the “culture of impunity” at the highest levels.  It appears that her blog and its revelations split the island’s population with many for and against her stand. Her death was met with condemnation from both the journalist community and bodies with the European Union concerned with some of the reported activities in Malta.

On our last day I am fortunate enough to discuss my thoughts and feelings about Malta with a local.  They acknowledge that there are some problems, perceived and real, around development and they concede that there can be what we might call “accomodations” to get things done, which does happen in various forms worldwide, but they explain to me that Malta as a country that has no natural resources, the government has had to focus on encouraging investment and business immigration, tourism and financial markets development to provide for its people’s health and education funding.

They finished by saying that when they are sitting in a restaurant having lunch in one of the three cities looking out over the splendour of the Grand Harbour and Valletta that there is no finer place to live in the world. Who am I to judge such a place with such a scant knowledge of the issues.  Go and see for yourself and make your own decision.