A jolt as the train stops suddenly on a steel bridge of uncertain age wakes me from my torpor in this humid weather, the rusty cast iron bridge alongside does not fill me with confidence, or the comments from our fellow passengers about not swimming in the river due to crocodiles. Humm let’s get off the bridge. As the minutes tick by, it becomes apparent that something has happened, what we are not sure, then word filters through the train: someone is dead, an accident, no, sadly suicide, a 23 year old young man just stepped in front of our train. The body collected at the back of the train and we move slowly to the next station a few hundred metres away. Many passengers had headed to the back of the train and one young man had taken photos which he was showing to anyone who interested. Passengers gather on the platform to look, comments such as ‘bad person’ or ‘it’s usually the girls, haha’ are said to us by the man who was sitting behind us, now standing on the platform outside Anne’s open window. Is this a frequent occurrence? I cannot judge how different cultures and religions react to such events as this, perhaps here the Buddhist reincarnation plays a part in the apparent indifference to the tragedy. A whistle, the train schedule is resumed, no police examination, we are off again.

As we pull out of the station, we pass two men carrying a stretcher with the poor man’s body just outside our train window, all the more poignant for Anne, having lost her brother to suicide 18 years ago. This tragedy is yet to touch this young man’s family and friends, his life passed no more than 15 minutes ago. Will they react with as much indifference as those around us? Having stood at Gallipoli and seen thousands of lives ended prematurely and having wondered what each might have achieved in love and life, we are filled with sadness at a loss of life before the fullness of time. I write this couple of paragraphs within half an hour of the suicide as we, on the train, continue on with the normality of our lives… 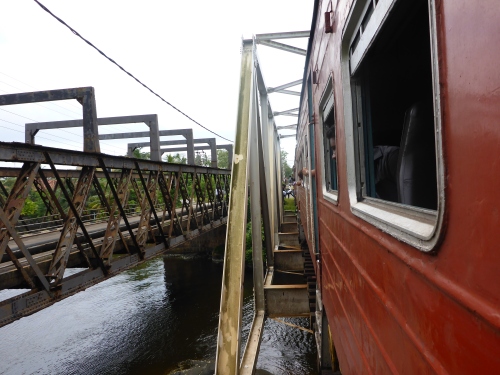 Our title has two elements, the tragedy you have read and our struggle with thoughts and emotions as the train rattled on towards Colombo and the comedy you need to see below:

All this took place in the space of one hour on the same train. Life goes on regardless of our personal circumstances and feelings and sometimes, it’s better from an emotional viewpoint to be swept up and ride the wave of life.

A little difficult to revert to ‘normal’ writing mode, Sri Lanka was the next logical stop on our acclimation return to Brisbane and our 97th country to be visited. With only two full days and a vast and intriguing country in front of us, we needed to be very selective. I wanted to see more than just Colombo but what: rivers, mountains, game parks all interesting but too far away. We chose Galle, about 110 km. / 70 ml. south, a port first used over two Millenia ago exporting cinnamon, visited by the famous Chinese admiral Zheng He, then a fortified city, started by the Portuguese, upgraded by the Dutch and finally occupied by the British as part of the global European empire competition that took place over the world for a number of centuries , a bit like the European Soccer Championships today. Winner takes all.

There is a railway line connecting the two cities which runs along the coast at some points which I understood made for interesting viewing. As we wait for our train at Colombo Fort station, one of Colombo’s two main railway stations the sights are one for UK train buffs, the stations, signage and jobs are a throwback to an era long past, down to the cardboard train tickets, 180 rupees or about £0.90. / US $1.20 for a second class ticket to travel over 110km. 70 ml. Trains are all diesel both DMU and locomotive drawn. The old UK problem of ‘Slam door’ trains has been resolved here, the doors do not close, helps with the ventilation as well. Our Galle bound train pulls in, the locomotive was built in Varanasi by Indian Railways, a place we visited in 2014 on RTW1.
Our engine pulls eight old carriages out of the station in a cloud of unburnt diesel fumes. The rhythmic thump of the engine and the coal like smell has one almost imagining a steam loco up front. All the equipment is aged, some more than others, I suspect that any increased passenger capacity comes due to not retiring older equipment. The track does indeed run by the ocean as we travel southward passing through small towns and villages, houses built close up to the railway tracks. The coal smell is replaced by sea and then drying fish as we progress. 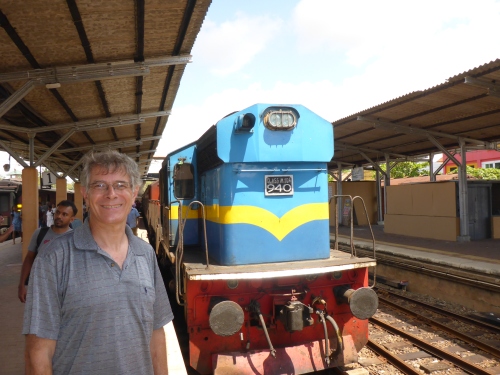 Our train to Galle, Sri Lanka 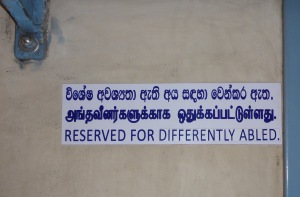 Spotted on a train in Sri Lanka

Galle Fort turns out to be, yes you guessed it, another UNESCO world heritage site to add to the collection, and it is surrounded by a dutch style walls reminiscent of Cape Town castle, same era of course, buildings have both Dutch and English heritage. While a smorgasbord of sightseeing awaits us, we are looking forward to going home, the journey is over and we want to go home, I fell more like sleeping than exploring, so Anne wanders the walled city. Enjoy the photo collection that Anne has created of our visit. 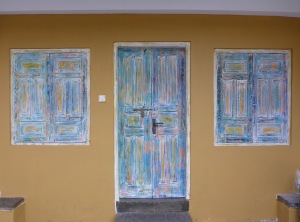 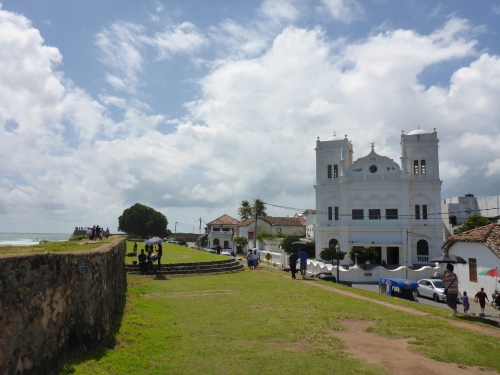 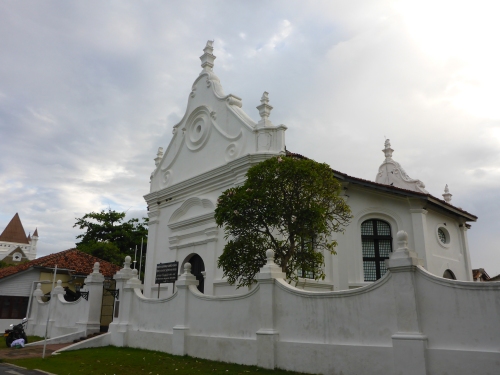 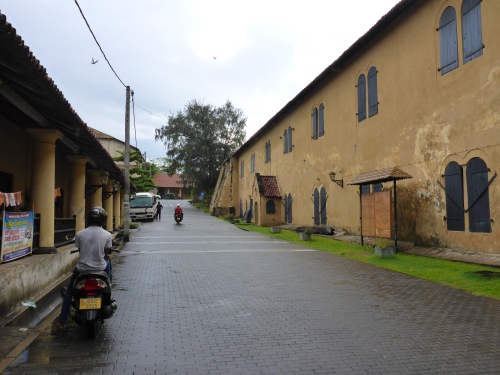 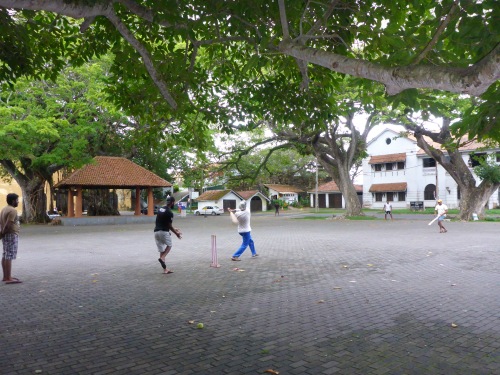 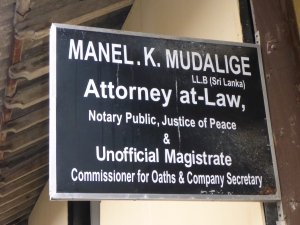 Waiting to sell the last tuna fish of the day, Galle 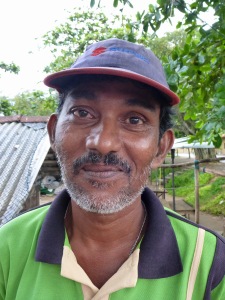 Had a great chat with Saman, Galle

We all love watching a stunning sunset, Galle 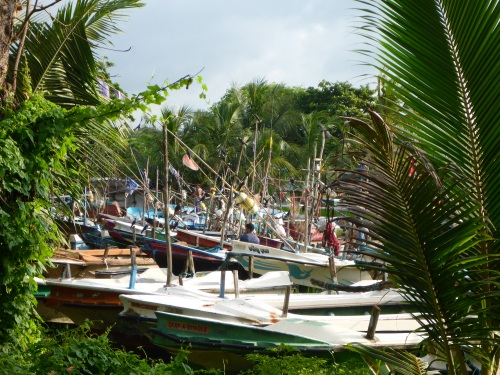 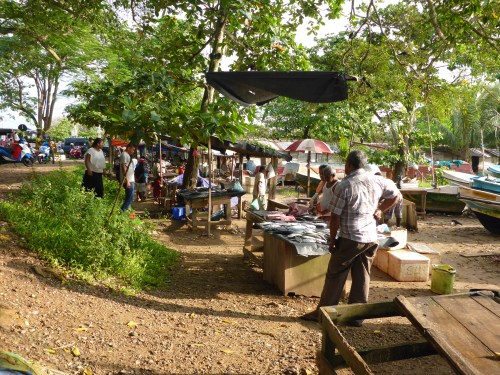 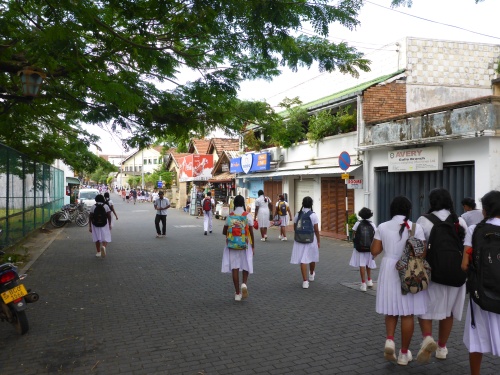 Although we have one more stop in Singapore to see our friends and our godsons before getting home to Brisbane, this feels like the end of the road. We celebrate with a Sri Lankan dinner at the ‘Ministry of Crab’ – guess what we had for dinner. It was superb and a great way to celebrate the end of RTW2.