Our priority this morning, after our lovely relaxing anniversary dinner in Tbilisi last night – yes the Georgian white wine we had last night was delicious and and no it didn’t give me a headache as many wines do – and after our equally relaxing breakfast in the garden this morning, is to do some standard bike maintenance – tighten the chains, add some air in the tyres, check the bikes for any loose bolts etc. All good.

This afternoon, my tour of Tbilisi, Georgia’s capital of over a million people, includes a rather long walk past a fabulous mixture of art nouveau architecture, soviet era sculptures, 18th century churches and hike up several hundred steps to take in a panamoric view of the city. Anthony enjoys some of those more than others but always willingly comes along with me.

Freedom Square, Tbilisi with a golden Statue of St George slaying the dragon 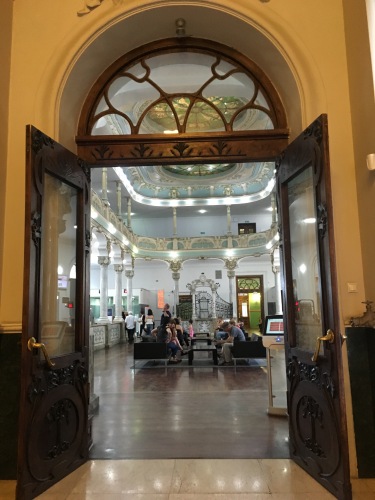 Old books for sale in Tbilisi 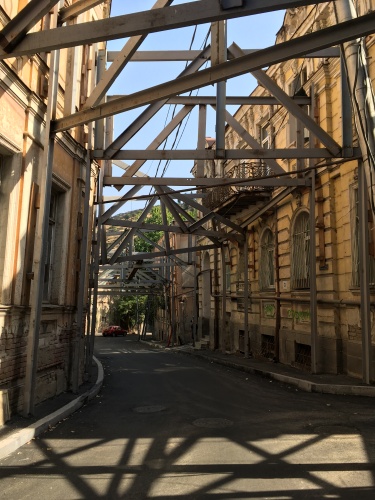 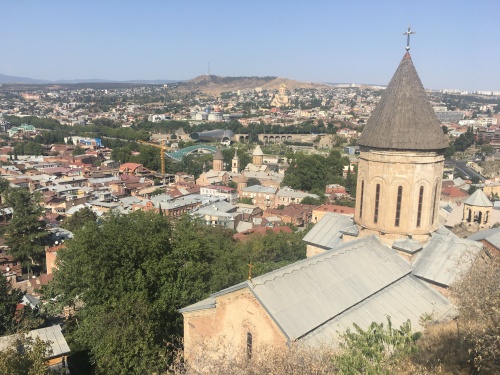 From the top, we get a great view of a helicopter water-bombing a bush fire on the outskirts of the city. Their efforts continued for over two hours. It was strange to feel the water spray from the water blown off the top of the bucket well after it had flown past us. 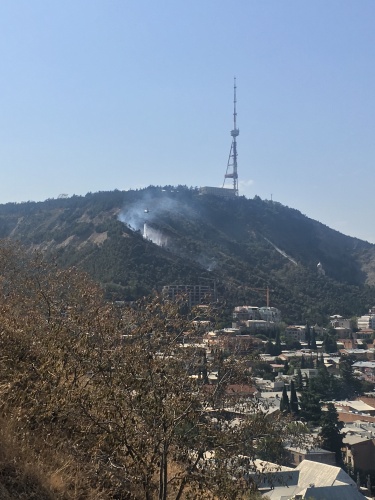 After our streneous walk up to the top of the hill, we are rewarded with not only a fabulous view but the option of taking the cable car back down which we took. Great to meet some Iranian tourists. A walk across the Peace Bridge and back into the maze of cobblestone streets of the old town. 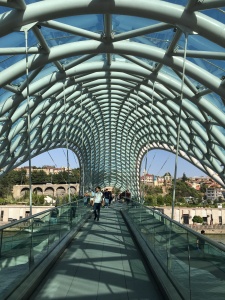 What a mixture of art and culture in this half day!! Sometimes it feels like we can only take in so many new sights and history and experiences and need time to digest it all before we can take more in. So on our second day, we only went to see the old sulphur baths – no uphill, just an easy stroll, stopping at a few churches and sculptures and then lunch. It seemed important to go and see the origin of the city’s name: it derives from the Old Georgian word “Tpili”, meaning warm. The name Tbili or Tbilisi (“warm location”) therefore was given to the city because of the area’s numerous sulfuric hot springs, which are still heavily exploited, notably for public baths (thank you wikipedia). The reviews I read on the baths were very mixed and we decided not to give them a go – mostly because we could not wait to get away from the area. That’s when we realised how we had now arrived back into ‘civilisation’ and tourist-land: this is the first time in months that we see lots of tourists. Not just local tourists, but lots of Europeans. And not just tour groups as we would see occasionally in the Stans, but lots of independent travellers with their kids. And many many green people: those were mostly in groups, nearly all male with paunches. They were Irish football supporters who appeared to take over various cafes and pubs in the old part of Tbilisi, over to watch the Ireland-Georgia World Cup football qualifier match here Saturday evening. What must the locals think of ‘us’? Anthony and I can’t wait to get away from those crowds!!

The Irish have invaded Tbilisi this week end

The next morning, we leave at 6:30am, destination Yerevan, 290kms away. On this trip, we have tended to leave large cities at the crack of dawn to avoid the mad traffic. Even though it is Sunday morning so traffic should be light, we are not taking chances – Georgia driving style is the one we’ve liked the least (a combination of Indian style with more aggression in cars more powerful than their driving ability can cope with!), and they have very strange one way systems in Tbilisi. Plus it could be a long day as we have a border crossing and what looks like scenic and therefore slow roads.

The short 80km ride to the border was thought provoking. Near Marneuli, I notice an airfield with cleverly disguised hardened aircraft shelters (HAS) in the middle of a harvested field but surrounded by barbed wire. We have been travelling through a region that has gone through a lot of turmoil – reading this article which lists so many towns we have travelled through is rather sobering… https://www.globalsecurity.org/military/world/war/georgia-2008-bomb.htm

Then as we approached the border, why so many stalls all selling the same huge washing powder containers?! We must have seen 40 or 50 such stalls. And then several stalls selling huge painted plaster cast animals and cartoon characters?! Is there a market for all those in Armenia?! 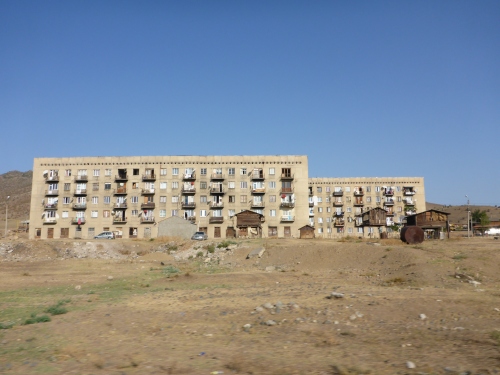 The Georgia/Armenia border crossing was a world record for us: 30 minutes!! (Documented in our Visas and border section https://2slowspeeds.com/visas-and-admin/ ).

As I write this and do a little research on Armenia for this blog, I am reminded of the still current tense situation in this region: I am currently in Turkey but cannot find historical information on Armenia, all articles on wikipedia have been censored…

It doesn’t take long after crossing the border into Armenia to notice how much poorer this country is. The farms are smaller, the housing more derelict, the roads have more patches than original tar. As we have seen since entering the Stans, we ride past so many sad, abandonned factories, apartment blocks, whole villages sometimes and many incomplete new projects – post Soviet collapse relics. 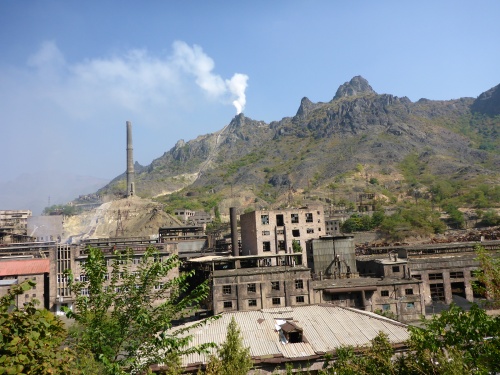 Northern Armenia – an old smelter? – using the mountain as a new chimney stack 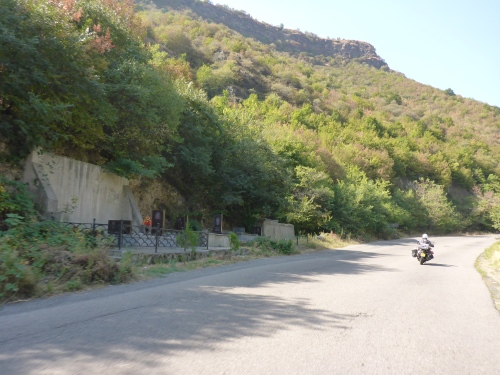 Cemetery along the side of the road, Armenia 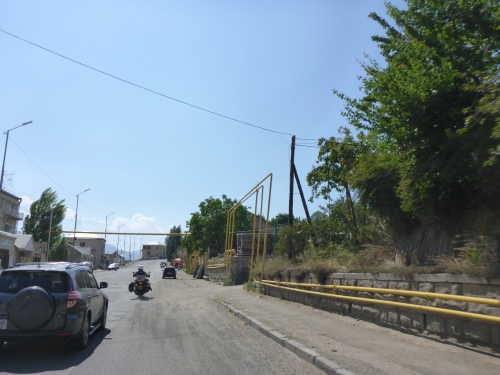 And then we get to a 60kms section of road construction through a mountain pass with hair pin bends: the surface is covered in rock and gravel, in various stages of being crushed and compressed, they do love river pebbles too!!, and often only one lane wide. Drivers do not always think and will drive straight at you even though there is nowhere for us to go. At one point, we had to stop and gesture for the car to stop and reverse as they entered the single lane before we had finished!! Which they did. And then suddenly we get to pristine brand new smooth tar!! Woohoo, that feels good. But within a couple of minutes, a police car overtakes me and pulls Anthony over. What?! We were not speeding!! This is the first time we have been pulled over on this trip which is remarkable considering how corrupt the Kazak and Uzbek police are reported to be, but we have been careful to always keep within the speed limit. One couple we met got pulled over 14 times in Uzbekistan!! Anyway, it turns out we were speeding as the new tar was deemed to still be ‘road works’. After much discussion, we told them we now understood and will stick to the 40km/hr limit and they let us go without a fine. We understood why it was still 40kms as the road works continued. Not for too long this time thankfully. It was interesting as, although we would not have chosen to ride this section, we were glad we did as we coped better than we used to. We are finally improving!! It felt good. And Streak and Storm performed perfectly too, especially considering the terrain we took them over today.

Even the tunnel had road construction blocking lanes, Armenia

After a lucky pick of a restaurant for lunch and a huge meal of chicken and potatoes, the rest of the ride to Yerevan was quite unremarkable, luckily avoiding a couple of rain clouds.

On our way to Yerevan, Armenia

First clouds we have seen in weeks!

Yerevan traffic is full of the usual ‘big city testorone charged crazy drivers’ and confusing intersections. Anthony does a fantastic job as always of navigating us to our hotel. We are releaved to get there, hot sweaty and very very dusty from today’s ride.

What I have seen of Yerevan on our way in leaves me cold and it takes me a while to motivate myself, after a shower, rest and change, to go out and visit the city centre before the sun sets.

After an absolutely fantastic and inspiring evening, I am reminded of the book and its covers expression. Never judge too soon. The city was so alive!! People, mostly locals and their kids, out for a walk, a meal, enjoying street music, enjoying the various fountains, enjoying each other’s company. What a fantastic job Yerevan city have done. They must have reclaimed a whole suburb to build the Cascade alone. There are hundreds of steps up but for those of us too lazy or tired to climb all the way up, there is a covered escalator, with dozens of sculptures to admire as you are whisked up. 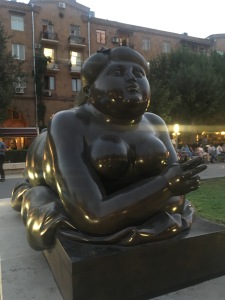 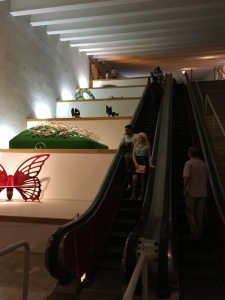 Yerevan’s musical fountain is million times better than the famed Las Vegas Belagio fountain. Truly!! I loved it. They played classical, ballet, rock, contemporary music. Listening to the music, watching the fountains, and the crowds, everyone entranced and visibly enjoying the spectacle. I think everyone was smiling. Some spontaneously danced. It was wonderful. On the walk back to the hotel, we walk past a number of small private musical acts in the pedestrian area including groups of older men quietly playing traditional Armenian tunes on the accordeon and other instruments. 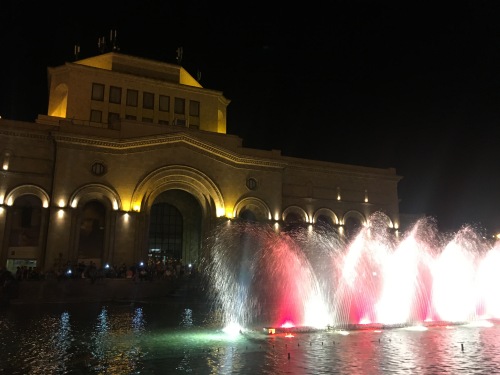 Enjoy Anthony’s video compilation of this evening’s fountains – press the arrow in the middle of the photo below to play the video:

This evening’s experience was a great reminder not to judge anything or anywhere when you are tired and that every place has its gems and can provide special memories if you take the time to immerse yourself in the local life. We are certainly glad we decided to make the detour to briefly visit Armenia. I had originally planned on visiting some of the numerous memorials to the Armenian genocide but our bad road delayed our arrival into Yerovan and we have a long day back north the next morning. Our time on the road is running out fast suddenly.

14 comments on “From Georgia to Armenia”