We arrived back in Russia with mixed emotions, we were ecstatic to have beaten the Naadam holiday 6 day border closure but disappointed to have left Mongolia earlier than planned. This is however the nature of this type of travel, one has to adjust and adapt on the road. We now had eight days in Russia before we must enter Kazakhstan so a more leisurely approach can be implemented. If you have seen the previous blog video, you will know the spectacular wilderness that lay ahead of us. For now, a place to sleep for the night was our next priority.

While looking at the snowcapped peaks on our left we see a couple of log cabins surrounded by a wooden fence, looking like something out of the US or Canada. Here we meet a young couple who are developing the place for tourists, mostly Russians. We do notice cabins being developed as we travel towards civilisation over the next couple of days: I wonder if this a result of the imposition of sanctions by the west in 2014 for the annexation of Crimea which caused the Rouble to fall dramatically against the western currencies reducing holiday options for Russians, thus increasing domestic tourism, reflected in the increase of accommodation being built? 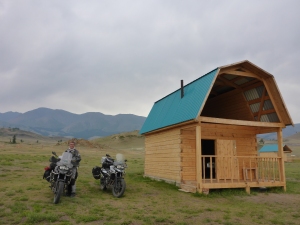 A perfect stop after a long ride and border crossing, at Kyzyl Tash and wait for the rain to pass 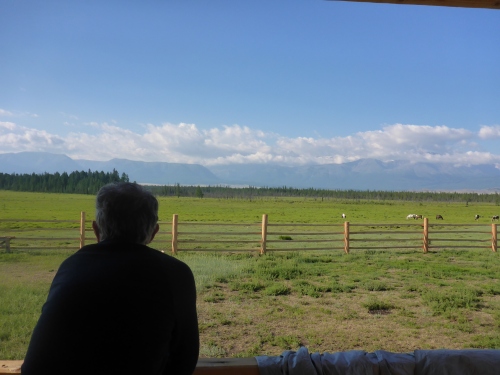 We are loathe to leave the beautiful vista of the snow capped peaks as we breakfast, but know that the road beckons with its twists and turns northwards. We are not disappointed as we ride open traffic-free roads, no stop signs, towns or traffic lights for 400km /250ml. We rise and fall as we transition from valley to valley via peaks that open up new and changing vistas. It is dream like riding for us. 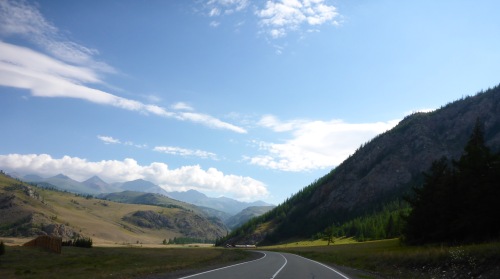 Each time we stop, we are approached by friendly Russians interested to know where we are from, what we think of the area. Some were surprised when we told them how friendly we had found people, they thought we were just being polite, but no, it’s a world wide phenomenon we said. While communication in Russian was difficult, we found a number of people, as we did, get out their phone and call up the language app and away we go. The improvement in the language apps will aid communication which is a good thing.

Anthony talking to the ‘locals’ via an interpreter 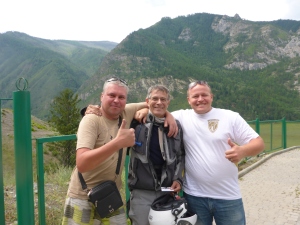 As we head north and reach Ust-Sema, the tentacles of civilisation start to reach out, more cabins, tourist resorts and increased traffic as we are at the start of the summer holiday season, families packed into cars with the roof loaded with holiday baggage. At one point a head pops out of a large inflatable raft strapped to the roof of a rafting adventure van travelling in the opposite direction – would have made a great picture but it appeared too suddenly for Anne to photograph. We also find we are really riding the bikes, on the open sections with no traffic, it is easy to move along, we now face streams of oncoming holiday traffic, no overtaking lanes and the lead laden smokescreen belching out of the old Russian truck lumbering along in front of you encourages a more active riding style. Judicious use of throttle and brakes is required to skip past the four or five trucks travelling together. Drivers are very courteous and the creation of the third lane happens often. We feel most drivers are more aware in these traffic conditions and act accordingly.

Let’s take the inflatable on holiday this year 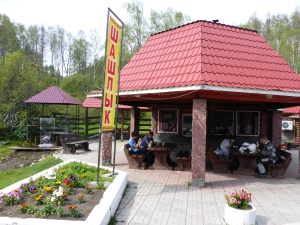 Lunch with a stream fed handwash on the left.

Still mourned, over 60 years on. WW2 memorial in Biysk

We have found the cause of Anne’s rattle as we headed over dirt roads while leaving Mongolia: we have lost a crashbar expansion nut & bolt. While we have spare bolts, the expansion nut is more problematic. I contacted the retailer who informed me that the manufacturer was out of stock and did not expect parts for three months. Humm… not the best customer service. That and a sticky front wheel, brake related we think, has us head for Russia’s third largest city, which I did not know was Novosibirsk, so used to just hearing of Moscow and St Petersburg.

Vassily at the BMW Motorrad dealership in Novosibirsk, comes up with a solution for both problems, thanks Vassily. A couple of relaxing days in Novosibirsk allows us to recharge our batteries after travelling every day since Ulan Baatar. Novosibirsk is the most northern point on our journey at 55.01 degrees North, the most southerly point was Payton in Arizona USA at 34:14 degrees North. We will cover 360 degrees Longitude but only range in a 20 degree Latitude window. 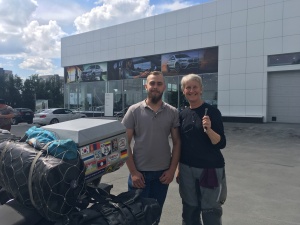 Vassily ‘the Fixer’ at BMW Motorrad Novosibirsk with a happy Anne

Novosibirsk Railway station. All trains run on Moscow time. Russia has 10 contiguous time zones vs 4 in the USA 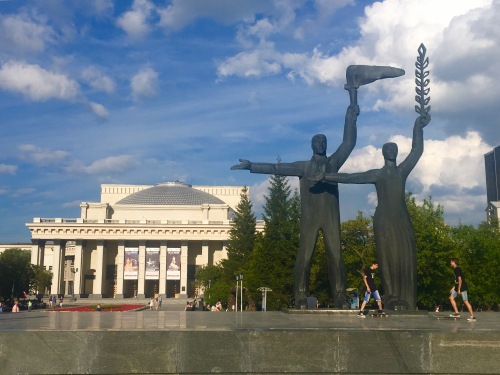 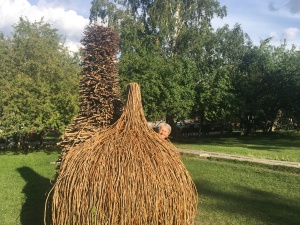 Our departure on a Sunday morning gives us an easy ride out of the city, progress is slow but steady with a long country section of road limited to 70kph instead of the usual 90kph, possibly a potential revenue raising section except people here stick to the limits, as we do. No fines please.
We dodge a few thunderstorms with well timed fuel and food stops, retrace our route back to Barnayl and onwards to the Kazakhstan border. Our hotel en-route in Aleysk turns out to be the re- purposed offices of a factory. The top floor is the hotel, with other levels housing a restaurant, supermarket and pharmacy. Clever thinking, but had no idea what the factory manufactured.

Our factory hotel in Alyesk 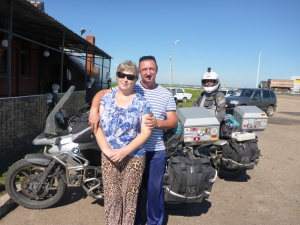 Got our Kazakhstan travel insurance from two very nice ladies just before the border and we were set to go. 30 days for Russia and Mongolia, we did it but really would have liked more time… 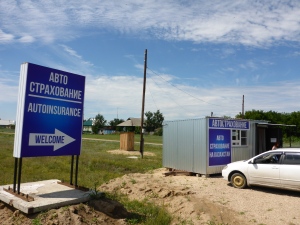 Kazak Insurance at the Russian border

Towards Kazakhstan and the oncoming storm

18 comments on “Return to Russia”