Waiting to board our flight from Vancouver to Seoul, we eagerly watch for any new pallets being driven to our plane to see if we can spot Streak and Storm. At each sight of large brown crates we rush to the window for a closer look, no, still not them… Time to board, we wonder if they’ll be on our flight as planned… 11 hours later, after a smooth flight, practicing writing some Korean words to memorise them when we see them on the road and having well and truly contoured North Korea, we arrive in Seoul. 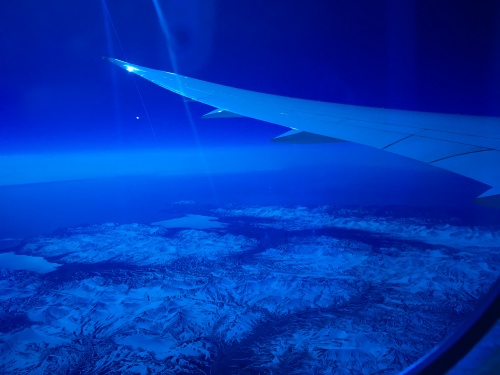 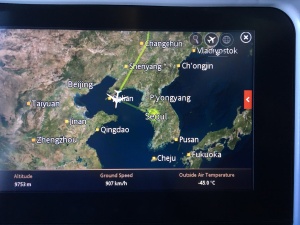 Staying well away from Pyongyang

Our immediate feeling at the airport is that everything is clean, calm and ordered. It is hard to describe the atmosphere. It is immediately clear that we are not to jay walk and walk on the correct side of the pedestrian crossing as identified with arrows – saves bumping into people walking in the opisite direction.

We get our first taste of hotels in Korea, although this one is clasified as a ‘tourist’ hotel. As you open your hotel room door, you are greeted with slippers in a sort of vestibule, and a little step to the main door. In the room is a tray with all sorts of men’s grooming products, even a hair brush (can you imagine using this hair brush?!) but the funniest is the large spray can which looked like hair spray, except for the picture of a cockroach lying on his back. Anthony reckons it too is a man’s grooming product designed by women who probably consider men to be cockroaches! The bed is super hard which I am looking forward to. 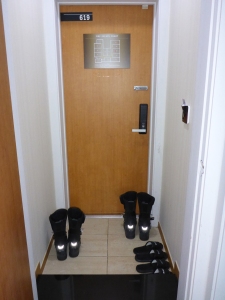 Porch into our hotel room 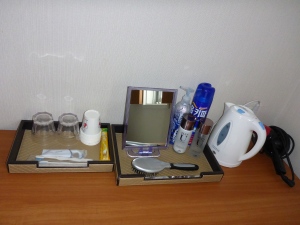 Once we connect to wifi and I find yet another frustrating email from our shipping contact here, Wendy: in addition to being asked a few times before our departure if we had arrived yet, despite having given our departure and arrival dates several times and her having our Airway Bills with all the details, and my asking several times where we would meet on Monday 12th, we arrive to find out that our bikes arrived a day early and she wants to meet us at the airport at 19:30 that evening, equivalent to 3.30am for us – sorry, not tonight! Same time tomorrow she suggests. And no word from the shipper… Pretty disappointing to say the least as this means we will be charged additional storage fees for having our bikes there over 24 hours. It is already equivalent to 1am for us but we decide it is in our interest to return to the airport asap and start the customs clearance process to save us time and money tomorrow.

The whole customs clearance process will be detailed in our Visas and Borders section soon, but suffice to say here that the customs staff at the airport terminal were incredibly helpful. The customs officer we were directed to immediately called an interpreter. They had our Airway Bill in their system as we understood our name being mentioned. Within the first half hour, three people were involved and placed 6 phone calls. We then lost count of the number of calls and people involved, I think another 5. At one point the interpreter came over just to chat with us – it was her duty she told us to be with us while the paperwork was being processed. When she had to leave, after the official closing time, another customs officer called us over to her desk. She spoke good English and she too explained that it was her duty to chat to us so that her colleague could continue her work for us and feel less pressured that we were just waiting alone. Such amazing courtesy and consideration. Two hours later, we had all the paperwork we needed to clear the bikes out of the warehouse the next morning. Time for some dinner and some sleep before an early morning for the next stage of getting the bikes out. 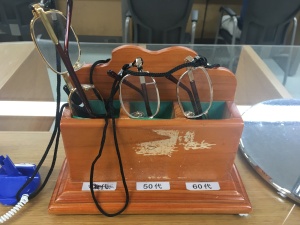 Every government office or bank provides these

Breakfast is a funny mixture of western and local food. We try our first kimchi, pickled chilli cabbage, it gives a bit of flavour and a bit of a bite to otherwise bland food. By the end of breakfast, we can see that are growing to enjoy Kimchi already. The next day was another whole process made the more interesting by a series of ‘helpful’ signs – which office are we meant to go to?! Yet again, someone came to our rescue: one of the Korean Air Services staff organised a car to drive us to a building to collect the original Airway Bill. It would have taken us hours to walk there and back. Paid the warehouse charge and after returning to the first office, got more signatures and stamps, we were ready to be taken to the warehouse to receive the crates. 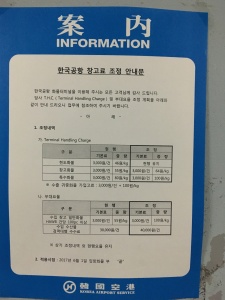 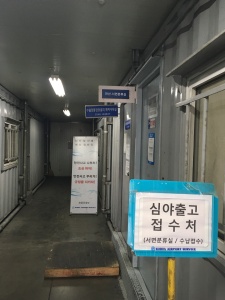 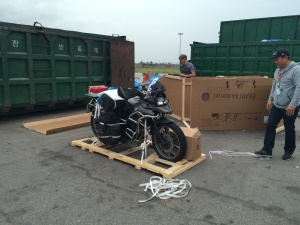 Time to finish reassembling the bikes

2.5 hours later, we are on our way!!! We are back at the hotel by noon – plenty of time to go into Seoul but not before lunch. We had been told of a great little restaurant around the corner from our hotel and decide to give it a go. What a feast, great dumplings. With Kimchi again of course. We are struck by the assault on the senses, just in our little area alone.

Left then first right to our hotel

Quiet Incheon where our hotel is

We take the airport express subway into Seoul centre, which is 60kms away. Again, we are struck by the efficiency, cleanliness and ordered feel of the subway. It seems that a lot of thought has been put into making travel easy and stress free. 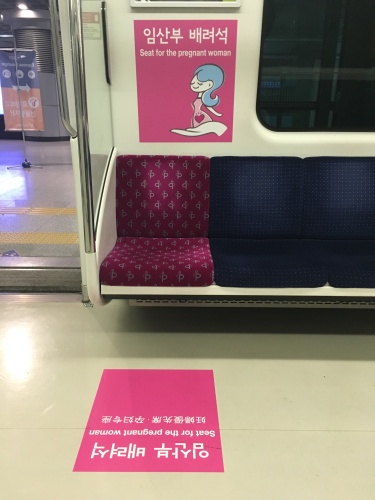 Reserved for pregnant women, whether showing or not

I have a little wandering tour planned out to take Anthony on. When time is limited, I prefer ambling the streets rather than visiting important landmarks or museums as I find you get a better sense of the place as it is today, and can still read about the history. I had read of an arty suburb called Gahoe-dong with good views of the city. Getting there would take us past the Gyeongbokgung Palace, the National Palace, where one can watch the changing of the guards, except on Tuesdays, that’s today.

King Sejong statue in front of the National Palace, Seoul 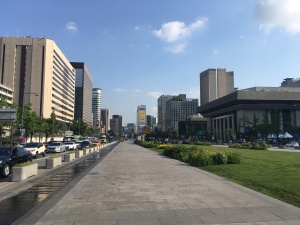 As we meander the streets, we come across two young ladies taking lots of photos of each other. Too photogenic, I ask them if I can take a ohoto of them and ask why they are in traditional dresses. Just because they are spending the day together Vivi tells me as Chong-Ing from Busan on the right is visiting her. There is something special to see people proudly wearing their traditional dress. After them, we came across many more, young and not so young. 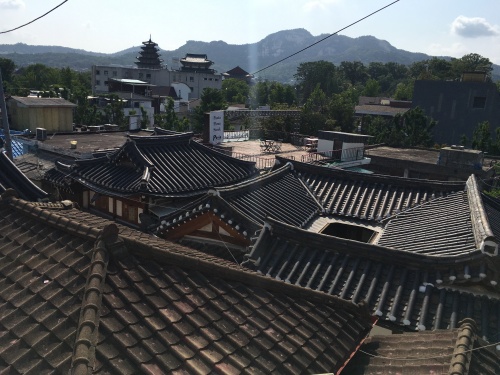 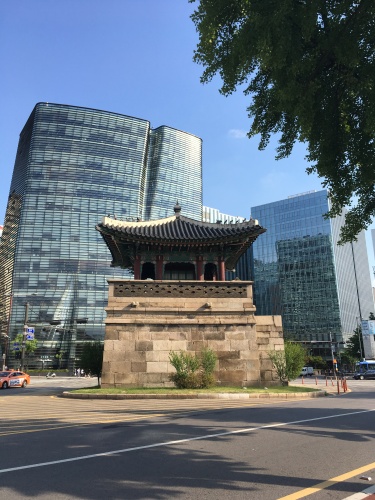 We stumble across an amazing art exhibition 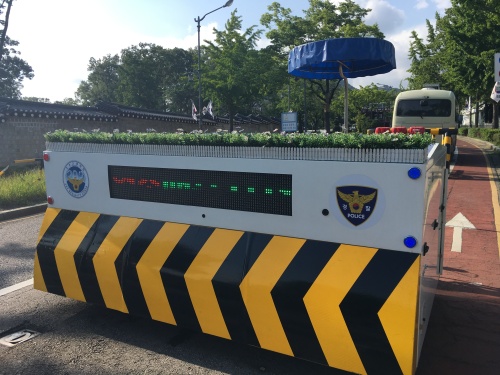 Police barricade to military base – with plastic plants on top!

What a full first day, a sensory feast but we can’t wait to get out into the country side tomorrow and visit some old temples.