‘On the road again!’ as the song goes, the bikes serviced, beautifully cleaned (we should have left the panniers on and maybe they would have washed those too!), Anthony has a new chain and sprockets so the constant rattling is gone and we are good to go. We are lucky to be leaving on Sunday, without the weekday traffic. We have, unusually for us, planned an early pre 08:00 departure. We are away and within one minute, Anthony’s carefully chosen route is abandoned, roads we planned to use blocked off for some sporting event.

Still, a quick redirection and twe are away in very light traffic. A quick stop by traffic police for using a motorbike free underpass.  Who knows why…  A friendly exchange and we are away on again and finally on the three lane expressway, accelerate to overtake a truck and STOP!  Who put a set of faded, barely visible, traffic lights on our side only?  Who knows, yet again… The freeway is dotted with bus stops as it passes through some of the working class districts of Lima. We have spent our time in Miraflores, an affluent seaside suburb, and not seen this side of Lima close up. This is the reality for many of the people drawn to Lima for the opportunities that a big city can provide.

Panamericana Norte leads us out of Lima and back to the desert landscape we have become so familiar with. We have noticed that, in towns and cities along the way in Peru,  traffic volume falls dramatically at the edge of town. The majority of traffic stays within the town limits with mostly trucks and busses making the long haul journeys. 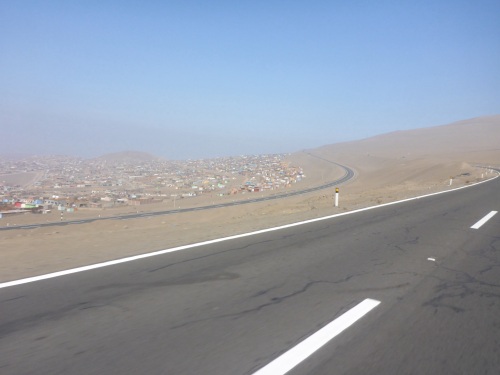 We are definitely out of Lima now

Towns are slow, with traffic calming humps sometimes every few hundred metres – most are very noticeable, painted with large yellow stripes, others we only know because the traffic in front of us suddenly slows down dramatically.  We have grown to love those humps as they have been very useful, giving us the opportunity to either over or undertake slow vehicles.

Outside the villages, we mostly see trucks and busses, a few cars and the odd mototaxi (tuk tuk in Asia) or motorcart, carrying incredible loads.

Typical traffic on the Panamericana Norte

I thought we had seen every combination of pastel colours in the mountain ranges, but we are once again treated to the most subtle and gentle shade of red, beige, grey and brown.  Each turn revealing a different hue and mountain shape.  It is calming and serene,  it seems like there is only us.  No other life.  No scrubby bush or bird.  Just a glorious winding road and us.

Our first fog encounter on the Panamericana Norte

Then suddenly, after one last bend, the vibrant green jumps out, shouting life at us.  We see rice, sugar cane, corn, chilli bushes and fruit trees.  Wow, I love that green!!!  It is amazing how life giving those meandering rivers are. 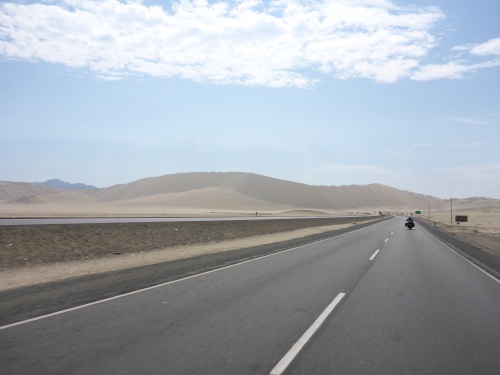 Wind and sand dunes on the Panamericana Norte

So many shades of grey!

After a most glorious ride, we finally reach the outskirts of Trujillo.  We had no idea we would get that far today.  Anthony checks hotels in his GPS and picks a nice sounding named hotel , the Libertador, on the Plaza de Armas, so off we set for a final stretch.  We arrive around 5.30pm having ridden 580kms.  What a gorgeous square and hotel.  That will more than do thank you very much!!!!

We have just arrived at Trujillo Plaza de Armas 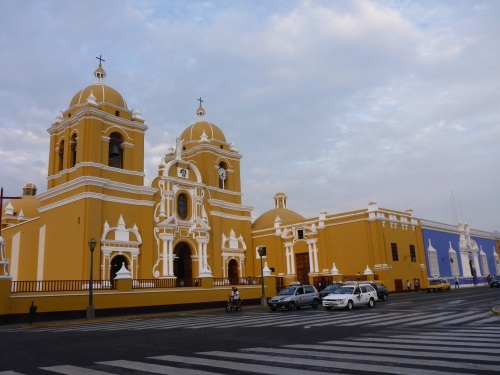 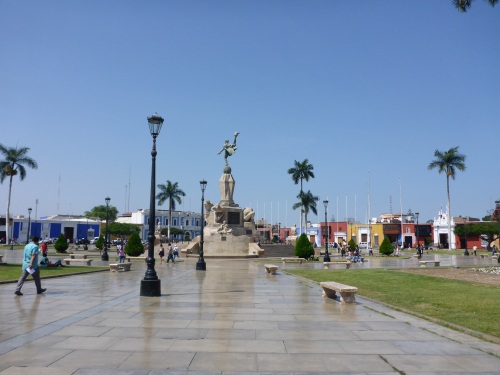 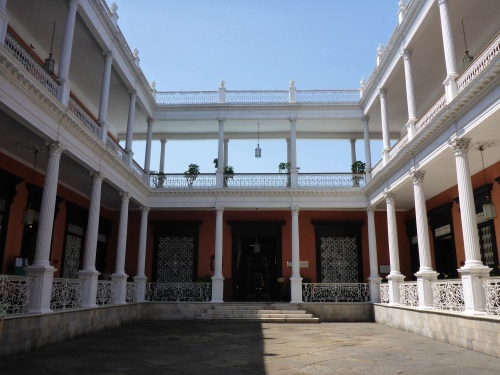 We quickly decide we’ll spend 2 nights there Ss there is so much to see here.

9 comments on “Another glorious ride – Lima to Trujillo”