We spent much of the last couple of days heading up the Peruvian coast, northwards you would think, but in fact we were heading west mostly according to the SatNav. I have always thought of the west coast of South America being a relatively straight line northwards, but was wrong. Talking of lines the double solid yellow lines in the middle of the road in Peru are not worth the paint applied on it. Everyone, including us sadly, ignores it.

Why you say does this situation exist and road users, including the “slow speeds” undertake such overtaking? The answer lies in road system in Peru, where we have ridden so far, no slow overtaking lanes exist in any form and it seems double yellow is applied in many more places than in other countries. If you are behind a heavily loaded truck doing less than 5 kph on a 30km section of mountain pass, heading to say Arequipa, you are more likely to burn out your clutch with having to feather it in first gear than arrive at your destination.

A lesson in overtaking from a local truck driver.

This does create increased risk where those overtaking on the double lines have poor judgement or overconfidence. We are always alert for this and only overtake where we have good sight ahead. We should also note that no emergency truck runaway gravel traps exist, so one is always conscious of the truck behind and its braking capability.

As the Easter holiday approached, we started to see our first Peruvian motorcycle travellers. We even stopped to chat with two couples who were riding from Lima to Arequipa for Easter. One of the bike tyres had met a sharp metal object with the obvious result. Luckily we were able to assist with a temporary tyre plug and a portable compressor to get them to Arequipa. We may catch up, time permitting, when they get back to Lima.

Helping fix a puncture for Ian and Stephanie amd their BMW F700 GS like ours.

Where the road hugs the coast, the smell of the ocean is strong and the salt it deposits on one’s visor leaves an opaque mask starts to blur the landscape. Wind is a constant companion on this arid section of coast, with villages that seem to develop along the riverbanks where irrigation has been used to bring to life the barren landscape. It is amazing to see how water can transform a landscape and how dependant we are on water’s life giving properties. 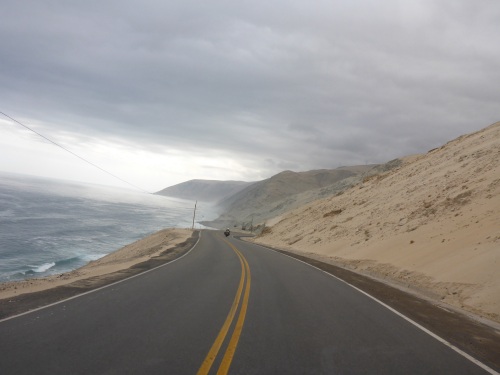 Down to the ocean yet again under a grey sky 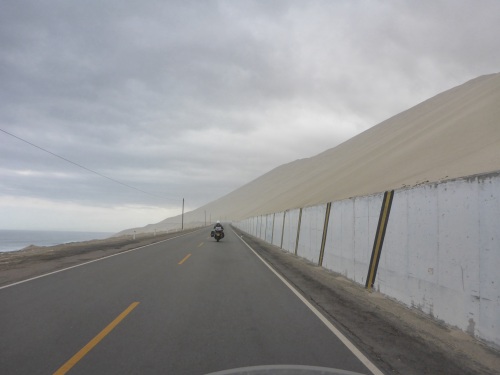 The wall barely holds back the sand off the road.

Into the black, no fancy tunnel entrances here.

I have tried to remember when I first heard about the Nasca lines, was it in my childhood or later I cannot recall. Having read a little about the lines again and all the varied and conflicting theories about the reason for their existence and am still none the wiser. Part of the problem is that the age, and therefore the date of construction is unknown, with widely ranging views which means that any links to celestial calendars is difficult to justify without a date and therefore a set star map to compare with. I do find it quite fascinating to think that the architects and builders would be unable to see the finished article, unlike almost all other historical constructions, e.g. the pyramids because of the low elevation of the lines and the fact they are spread over many kilometres / miles.

The flights over the Nasca lines are well organised and leave on a regular basis, reportedly making Nasca airport the second busiest in Peru for aircraft movements after Jorge Chavez International in Lima. Seems strange not going aloft with Anne, but as she rightly says, she would probably not enjoy the flight so I will take the photos and videos. I had wondered about doing the flight as one can see better photos than I can take online, in books or at museums. Somehow though actually seeing, or in Anne’s case seeing my photos, makes one feel something extra that you do not get by just seeing a good quality picture or video, a connection is made and that’s why we want to experience the world the way that we do. Not sure I explained this well, but I know how I felt having done the flight. I will let the photos speak for themselves.

Hard to see, but in the circle is the whale geoglyph.

The hummingbird geoglyph showing some of the terrain around.

The Austronaut geoglyph on the hillside rather than the valley floor.

I have also put together a short video to allow those in the armchairs the opportunity to fly over the Nasca Lines with me. Note this video may take a little time to download before it will run.

17 comments on “Onward to and over Nasca”