We are lucky to have found a hotel with a room available for 4 nights in a row. For some strange reason, every single hotel in Imphal is overbooked. Once again, although the hotel told us they had a room available when we called to book, when we checked in, they said they only had a room for one night then they would shift us to another hotel for the other nights. “No we don’t want to move” I suddenly said. “Oh!! Let me see…. Ok, that’s fine, you can stay.”

We are not sure why this city of half a million has such a shortage of hotel rooms. Is it because Myanmar is opening up? It will be interesting to see how much traffic goes that way when we go. Or is it because all the hotels handle their bookings as casually as we’ve witnessed, overbooking, people not turning up as they don’t take credit cards to confirm bookings, hotels changing confirmed bookings without notifying customers. It’s a mess. This evening, we met up with part of our group and we were the only ones who had a bed for tomorrow night. All the hotels are booked. When we got back to our hotel, I found 7 rooms for them!!

Getting to Imphal, we both felt a sense of achievement. We have been on the road 4 months to the day, travelled 15,400kms and survived riding in India unscathed. We are no great off road riders, but we are quite happy with how we feel we handled the last couple of days when we got quite a few bad patches of dirt and potholes. The timing was perfect, hopefully preparing us for Myanmar. Luckily, the traffic was pretty light on the mountain roads, so we didn’t have so much mad traffic to deal with on top of the road conditions.

We had travelled 125kms in just under 5 hours and arrived in time for lunch. After we checked into our hotel room, we suddenly felt extremely drained. The stress of surviving Indian roads and the emotional struggle we’ve dealt with understanding India had totally drained us. Time for lunch at the hotel, followed by an afternoon nap for a couple of hours.

Our luck has continued as it started raining that evening and for the following 2 days. We are so lucky we left Kohima when we did….!!! I would not have enjoyed riding to and from Kohima in the rain in the mud, over slippery rocks, through water filled potholes and round slippery hairpin bends, up and down the mountains, like the others in our Myanmar group had to contend with.

We have enjoyed the last couple of days. Catching up on emails, blog, recharging, washing, sleeping, bike maintenance, fixing my brake fluid reservoir which still has cracks in it as my poor jacket can testify as it is covered in splashed red brake oil 😦 and reading the local newspapers. They are always such a treat. Reading what is obviously important locally such as states wanting autonomy, finding out that 50 per cent of all the lpg cylinders are defective as they have leaky valves, and the English expressions they use such as ‘an incident happening in the wee hours’. In addition to ‘lakhs’, a unit equal to 100,000 but represented as “1,00,000” I now know about ‘crore’ which is equal to 10 million and written “1,00,00,000”.

In addition to a shortage of hotels rooms, an embargo on petrol for 1000 hours was announced yesterday. It is the result of what is called a bandh here, a form of protest, declared in the adjoining district to Imphal. It is interesting to learn that during a bandh, the political party or community declaring it expects the public to stay home and businesses to shut.

Luckily, we refueled on our way into Imphal so we only need a few litres to top up the tanks. I made a couple of trips from our hotel to some ladies sitting on the side of the road selling black-market petrol in old water bottles, filled our red fuel container, topped up the bikes and refilled while Anthony went looking for more gasket silicone sealant for my brake fluid reservoir.

We have now met our whole group – it was good to see Kristjan again! There will be 11 of us and we both feel it will be a great bunch of guys to travel with.

We had our last Indian meal this evening. Once again, it was absolutely delicious. The food has been consistently fantastic, from the smallest roadside shack to full restaurants. Over dinner, we discussed our time in India:

As is always the case, the people we connected with made this whole trip worthwhile. We met some very very special people.

Although I have to admit to a touch of trepidation at the thought of the first 2 days which we know will be hard and long, we are both really excited and looking forward to this next phase, discovering Myanmar!!! We expect to be out of touch until we reach Thailand on the 11th November. 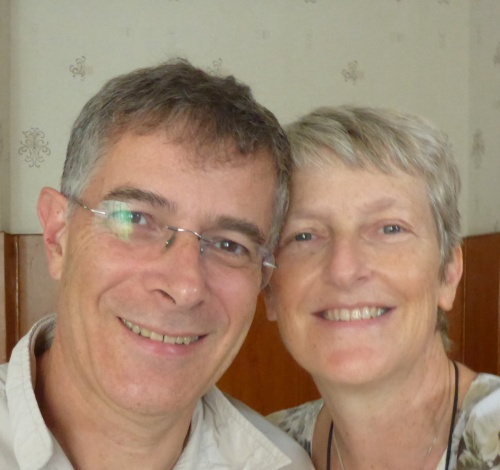 After 4 months on the road, still happy, healthy and enjoying this adventure. Can’t believe Anthony turns 60 in a week!!

Thank you again for all your support – it really is lovely to know you are travelling with us and we appreciate every comment and question we receive, either via the blog or privately. We expect to be out of touch until reach Thailand on 11th November.

12 comments on “Imphal – our gateway to Myanmar”