For the last three weeks, our journey from Delhi to Guwahati, which has covered some 2,000 kms, has been on flat and mostly straight roads. This is because we have travelled in the floodplains of Ganges and then the Bramaputra and their respective tributaries. We will now start to climb into the hills to the south of Guwahati for the last 500km through India to our jump off point to enter Myanmar, the town of Imphal. Although, with a population of 470,000, you probably cannot call it a town. We will start to experience sharp bends, which are great on a motorcycle, provided you have an idea of the road surface and who or what may be on your side of the road around the next corner. Here neither of those certainties exist, so caution needs to be exercised.

When Anne showed me the Google Earth images of our route to Imphal, it became apparent that 20 kms per hour is a good average speed for the day. The twists and turns and the slow trucks we are likely to encounter en-route makes braking the journey in three riding days sensible. I have delusions from time to time that we will be able to go faster. Reality has proved me wrong, but the best we have achieved is 25 kms per hour average, which on percentage basis is a good improvement, but does not reduce the long days’l riding enough. Three days it is.

We spend a leisurely morning at our hotel in Guwahati, recharging all our electrical equipment and uploading photos and videos to Dropbox, our online backup site. It is interesting how dependent we are on needing electricity to recharge the various items we have, although we do have capacity on the bikes to recharge during the day, but having cables in your jacket connecting to various items means we try to avoid this if possible. We also look out for good internet speed to upload video and photos, but often this requires us to buy 3G data packs for our local SIM cards as hotels are notoriously slow.

Heading out of town to the accompaniment of the occasional firework bangs as Diwali continues, we spot a brickworks and people working in what looks like a large field divided into sections by bricks. Here we discover women working making bricks, one at a time by hand, while children play and men mostly look on. It looks to be slow and laborious work, probably only rewarded by pay per brick. Judging by the nearby shacks, the families look like they live as well as work here. 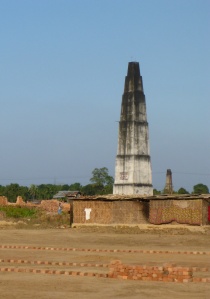 As we left the brickworks, Anne who usually keeps me informed of what hazard to expect, said “Elephant!!!”‘ – well that was a new one, we had seen the right of way signs for elephants, but not the real thing. Here was a working elephant going about his business.

Look what’s in my lane!!!! Out of Forbesganj, India

We are heading for Nagaon, the first town on this section of the trip. We find a hotel room after a couple of abortive attempts. The management are very concerned at our motorbikes being outside, even with our covers and with locks. They try to convince us to push the bikes up a short flight of stairs, not understanding the weight of our bikes. Failing this, they arrange for the police to provide a security detail overnight. What concern for our bikes and, by extension, us!! Another personal connection with people in India which we had been looking for.

Our next overnight stop will be Kohima which, like Darjeeling, is perched high on hillsides some 1400 meters above sea level. We watched the temperature drop as we climbed and realised that we now find anything below 21.5 degrees Celsius cold! Over the last four months, we have been subjected to temperatures as high as 46.5 degrees with it normally being above 30 degrees, we have become accustomed to this. Our average speed is as predicted, 20km per hour as we twist and turn up the road on which water has created potholes and washouts. Kohima proves to be as difficult to navigate as Darjeeling was with roads running up and down the mountainside. Luckily our route is straight through town to our hotel, which is perched on the hillside on the road to Imphal, close to the cathedral whose bells we can hear in the morning. It has been a long time since we heard that sound.

As we have moved through this part of India, we started to notice schools named after Christian Saints, as we move deeper in to Assam we have started to see Churches as well. I had not realised that a sizeable Christian population existed. We have been used to Hindu and Muslim villages with an increasing Muslim percentage of the population as we got closer to Bangladesh. I presumed that the origins of Christianity here dated back to missionaries probably from around the time of the East India Company, but in fact Christianity can be traced back to the 6th century, before some European countries saw the introduction of Christianity. It is estimated that there are some 30 million Christians in India, the third largest religion in India.

What a treat to come across these elephants on our small country road in Assam, India 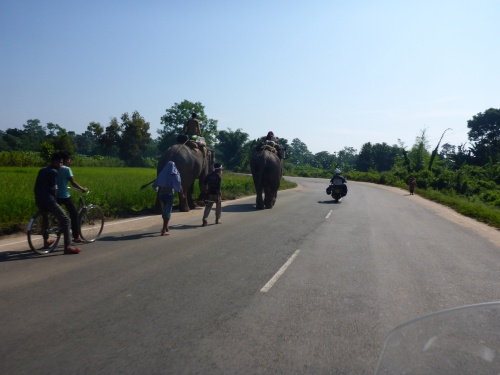 Lovina, the gorgeous hotel and restaurant owner where we had lunch 40kms north of Kohima, India

The view from our hotel in Kohima at 6am, shortly before we left for Imphal.

On day three we arrive at the village of Mao, on the border of the state of Manipur. Here we complete entry formalities to the state which included our passports being stamped. The first time we have had our passports stamped at a state level. They also have an Ebola temperature test for foreigners, plus the obligatory ledger to fill in all our details. We felt that the village had a really good feel and we would have been happy to spend more time there, but the grey rain clouds forming to the north, reminds us that we should move on as mud roads are our least preferred surface. 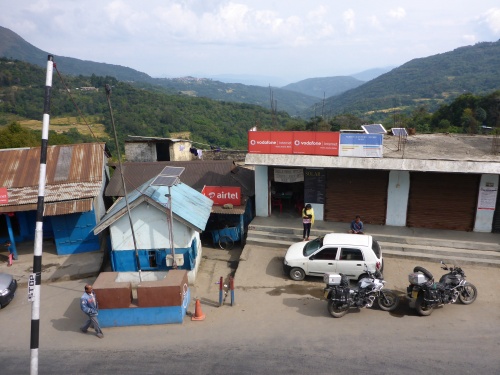 Police office at Mao, Manipur top right, where we got our passports stamped!

We had originally planned to spend four days in Kohima at our hotel. We had been promised a room with a view and balcony, but they gave it away to someone else for one night as we were staying for four then lied to us about what they promised. We cancelled the extra three nights and moved on to Imphal. This turned out be good for us as it meant we avoided the subsequent rain.

7 comments on “Guwahati to Imphal – twists and turns”