The maps have been refolded, the tent packed and we are ready to depart Airlie Beach, but where to? We have decided that with the strong 40km/hr winds scheduled for the next few days and approaching school holidays that Cairns and the Daintree will have to wait until another day. Inland and south it is. To head south on our planned route, we must first head north 80km/50ml before we can turn inland.

As we approach Bowen, the ocean comes into view again. It is interesting to note that while travelling up the Queensland coast on the Bruce Highway glimpses of the ocean are few and far between until you are north of Cairns. 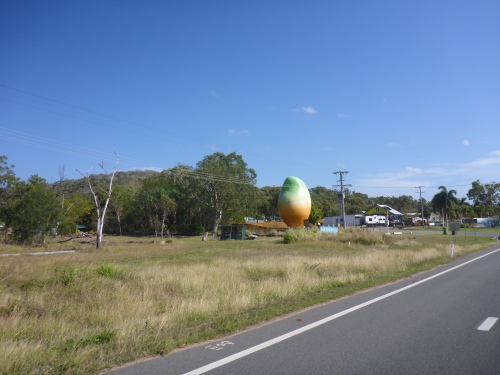 As we progress away from Bowen the strong winds are abating and the landscape changes. We leave behind the green sugar cane fields and cane train crossings and are moving in cattle and coal country. We have decided to take a route that keeps us parallel to the coast but on roads we have not travelled before. Our planned route will take us to Collinsville, Nebo, Dingo, Banana, Mount Morgan, Monto and back to Brisbane. We also realise that the clouds and rain that seemed to have followed us up the coast have dissipated and we are now riding blue sky days, perfect!

And then we finally got blue skies and funny clouds

Our first stop in Collinsville for morning coffee. We were lucky to spend an engaging hour talking to a local cattle farmer Stephen about his property on the Burdekin river and also the barramundi and crocodiles that inhabit the river. I was not expecting crocodiles to be so far inland.  I think I will keep my toes out of the water should the opportunity arise.

In the Wikipedia entry on Collinsville, it talks about coal being discovered in 1866, but in the next sentence mentions that the aboriginal name of the town was “Moongunya” which means “place of coal”! How often do we see the term “discovered” used when the locals knew always where it was, perhaps we should use “discovered by …” instead for accuracy.

Unlike the coast, road traffic is light, however in this coal mining region oversize loads seem fairly common and, unlike the oversize signed loads we see in and around Brisbane, these are wider than 50% of the road. Locals just pull over when they see a pilot vehicle approaching. We did find that the trailing vehicle was helpful in getting us safely past these mammoth loads on numerous occasions.

I think we can call this an oversize load(s).

Oh no, we stopped too long, will have to get past them a 3rd time!

An overnight stay in Nebo took us back to the same pub we had lunch at last year while in the camper van.  This is the only time that our paths crossed with last years trip. We get talking to a couple of people who were from the Department of Agriculture and Fisheries and lo and behold were friends with Katie who was expecting the baby in Rockhampton, small world.

We had been puzzled since our trip last year by a shrub we had seen planted in well spaced rows in cattle country. Again we are seeing the same plant. We did not understand what this was. It turns out to be Leucaena, which is a legume fodder crop, that originated in the Americas, that used as a cattle feed supplement. Always something new to learn when travelling.

Lunch is taken at Kell’s Snack Shack, parked at a road junction off the Fitzroy Developmental Rd near Middlemout. This enterprising person has a mobile kitchen with its own truck mounted generator providing meals and coffee to passing motorists. A steady stream of road trains, trucks and service vehicles arrive and depart while we are there, a testament to the service provided and a CB radio to take orders in advance is a smart move. 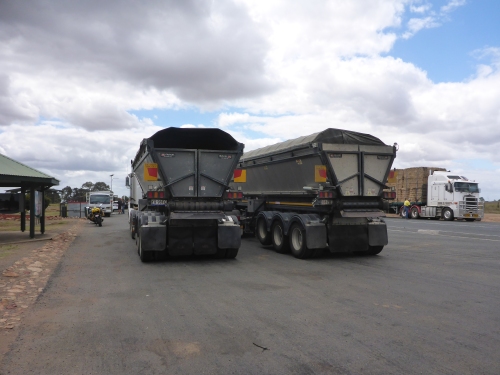 Must be the town of Dingo

We return to Rockhampton to see new Harry and proud parents Katie and Gus. While we had missed Harry on the northward trek, he arrived in time for us to see him on the way back.  We will also get to see his new home as we are invited to spend Friday night with the new parents and Harry at their home, on a cattle property, outside Banana.

We dine that night at TruFusion, an Indian restaurant on the riverfront in Rockhampton. The food was fantastic, but do not order as much tasty nan bread as we did! 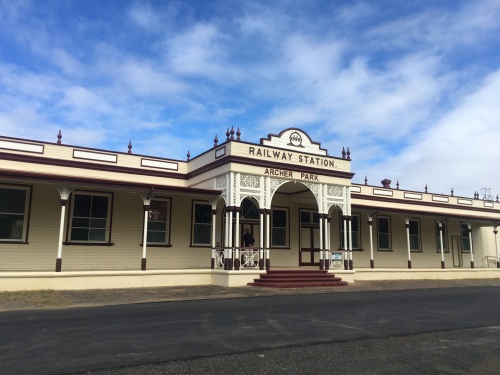 Archer Park train station in Rockhampton is now a museum

Heading for Banana gave us an opportunity to take the Burnett Highway to Mount Morgan, a wonderful twisty motorcycle road. The fun of riding at its best but curves are tight and any overspeed and you could be on the wrong side of the road. A visit to the railway museum which was on the now abandoned Moura to Rockhampton rail line gave us the history of the area based around the Mt Morgan Mine which operated for almost a century extracting gold and copper.  At one time it was one of the largest gold mines in the world.

Banana was named after a yellowish bullock

A night on a cattle property. A first for us although there are no cattle at present. Katie and Gus are excellent hosts and give us a tour of the property the next morning.  I should not have offered to open and close gates as I did not realise how many there were!

The property outside Banana 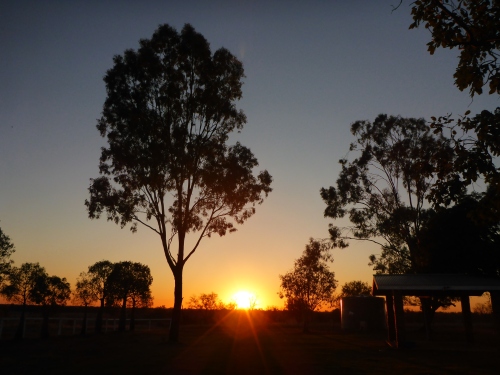 We take the Burnett Highway (A3) from Biloela to it’s southern end at Nanango. We had never ridden this route before even though it is not that far from Brisbane and were pleasantly surprised by both the twists and turns and the change in elevation along parts of the route.  In addition, traffic was light which made it all the more enjoyable. We will ride this route again one day. 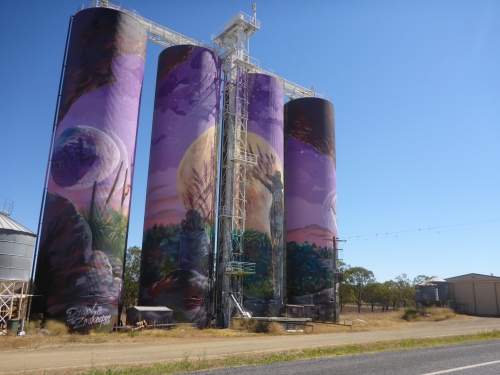 Painted grain silo by Drapl and The Zookeeper in Monto, Qld

With the new locally acquired COVID cases in Brisbane is a lockdown looming? Breakfast is taken at the Goomeri Bakery, a French style bakery with a well deserved reputation in Goomeri while we wait for the 10am Queensland COVID update. We have been on the road for 14 days so are now outside any historic quarantine rules. We have decided that if a lockdown is declared for Brisbane and SE Queensland we will turn around and head north again.

Enjoying a rest and oversized croissant at Goomeri

No new COVID cases and no lockdown, so we are off to Montville to spend a night with friends Pam and Jim who have a wonderful country retreat overlooking Lake Baroon. Great to catch up.

The scenery quickly changed from this…

… to that. Good to see green again, approaching Maleny 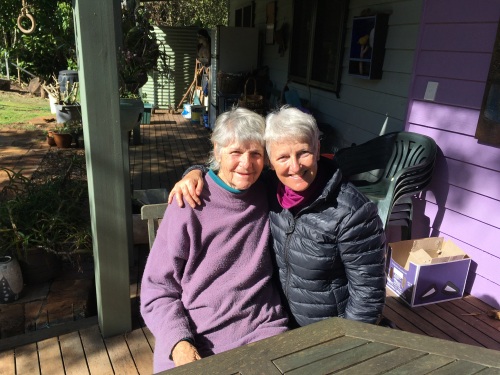 Great to spend a night with Pam’nJim.

A short run back to Brisbane and we are home.  Our first proper motorcycle adventure since 2019 is sadly over. It also our first in Australia since we tried to ride to Melbourne for Christmas 2012 and I ended up being airlifted to John Hunter hospital in Newcastle NSW.

We took only 15 days and covered just over  3,100km / 1,900 ml. but we have not lost our  passion of this type of adventure.  While we are restricted now, I think that 2022 will open up more opportunities for travel, so hopefully we can be “back on the road again” as Anne likes to sing as we depart in the morning.

But for now, it’s been back to reality, trying to turn our backyard wasteland into something more presentable.

We moved these 5 cubic metres of soil by hand – good exercise!