As we walk through the archway of Rochester castle in Kent to hear the local proclamation of the accent to the throne of King Charles III, we are struck by the thought that for hundreds of years this was how locals would have learned about such an important event.  No TV, instagram internet messaging or other forms of modern instant communication were available.  It was nice to feel that we have been a small part of what will evolve over the coming week.

As someone in their 60’s who has only known of and had Queen Elizabeth II as their head of state in three countries Anthony has lived in, the feeling, as for many others I assume, is a mixture of sadness for the Royal families loss and our own loss of continuity in a world where so much changes so quickly in the 21st Century.

While people in the UK and especially those in London will be more intimately involved with events leading up to the funeral on the 19th of September, we will be in Tuscany, exploring a part of Italy that has drawn us with its muted colours, fortified towns perched on hilltops looking down over olive groves and wheat fields.

We are off to Tuscany, well almost……Flight cancelled, without any fanfare the email arrived from EasyJet cancelling our flight from London Gatwick to Bologna two days hence.  The first step for us for a week long surjourn exploring the backroads of Tuscany.

In these days of low cost flights, there is no airline rebooking or making alternative arrangements on your behalf, they are long gone. Make your own new booking at no cost or get a refund are the options available. After a brief flirtation with rival Ryanair’s timetable, who have had the least percentage of cancellations over the summer, we decide that we will rebook with EasyJet to Milan and take a train to Bologna airport to collect our rental car.  Change as little as possible seems the best way forward. 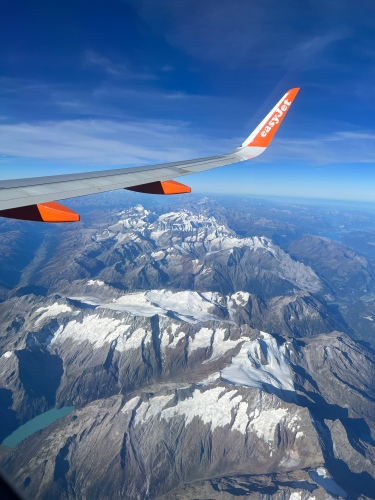 Flying over the Alps into Milan

The only drawback, apart from the extra travel is the 3am alarm as our flight now leaves at 7am not 11am. The journey to Bologna airport sees us use a hire car, plane, two busses, express train and a monorail, quite a variety of forms of transportation all because of a cancellation.

The airport seems as full as I remember last month when we flew from Gatwick, full of holidaymakers, tourists and businesspeople.  The only change appears to be that all the tv advertising is showing a black and white image of the queen as a sign of respect.  Many of the shops also have signs of condolence, all of which must have been printed in double quick time.

We now know that the cheapest way to Milan Central Railway station from Linate Airport is by Number 73 bus then number 60 bus.  All because we bought a couple of €2 tickets which were only for the local busses that run quite frequently compared with the dedicated “Airport Busses”.

Milano Centrale Railway Station is a marvel to behold, built in the 1930s in the era of  Mussolini, it displays a mixture of Art Déco and Art Nouveau styles. Approaching from the park opposite gives one a chance to see the grandeur of the structure from a distance, not possible in many other impressive big city railway stations.  Worth arriving a little early for your train to explore a little.  As we walked through the entrance it felt like I was entering a series of anti chambers in a Roman temple.

We finally made it happen – while we have been to Florence and Sienna before,  and seen most of the stunning historical marvels there, I had dreamed of spending time in deep rural Tuscany.  After the last couple months of being thoroughly spoilt by friends and family, it was time for us to retreat and get some quiet time. That is how we came to spend time in a cottage, a good 40’ from the nearest town of Volterra.

Of all the places in Tuscany, how did we chose that part of Tuscany?  For its proximity to some villages I wanted to visit but also just as importantly we wanted the ability to enjoy the scenery in all its splendour and changing light and make our own meals in the evenings.

Our AirBnB host had warned us many times prior to our arrival to make sure we stopped at supermarkets on the way to buy food as there was no store nearby.  She also mentioned that Italy was very coeliac aware which was a great surprise and she was not wrong.  The first counter as we enter the Coop has a huge sign “senza glutine” near gluten free pizza bases.  We stock up on all sorts of vegetables and meats for our pizza bases and everything we’d need for our stay.

We arrive at our cottage just before dusk and the lighting is turning gloriously golden. Just like in the photos.  Anthony wastes no time and starts a fire in the outdoor pizza oven.  We hadn’t expected to start our Tuscan experience so soon!  The pizza turned out delicious.  And our second one a few days later of course was even better! 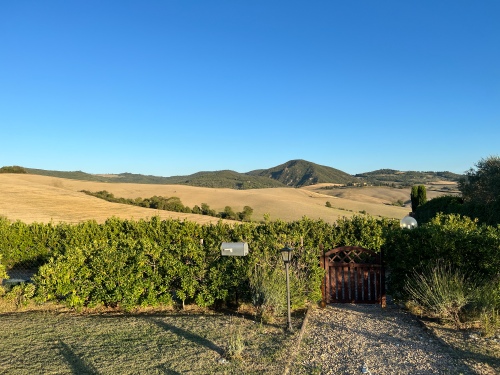 Fiew from our AirBnB when we arrived 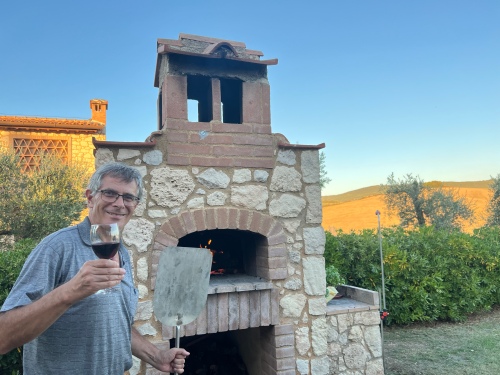 Time to prepare the pizza oven

The first thing that struck us while driving in Italy is the number of Formula 1 wannabes.   Nearly everyone drives as if the road is a one way system, going their way of course and every bend is cut to save time.  Having driven in Italy before, I was familiar with their driving style and was glad the hire car company had upgraded our car to a more powerful one as opposed to a physically larger one!  Small is good there, especially on narrow twisty roads.  We did laugh at the Italians’ total disregard for no parking (all around the airport roundabouts), no overtaking (on bends, hills or blind spots) and no speeding!! We think our riding in places like India got us prepared for the exciting situations we come across!

Coming from the sanctuary of our quiet cottage in the country, arriving in San Gimignamo to the throngs of tourists was a shock – maybe arriving after schools returned from their summer holiday, just one week later, would have been better.

As you reach the town’s fortified walls and walk through the gate, you immediately feel wrapped in medieval times but also see what life was like in the 1700s, long after the town’s decline in importance but centuries before its regeneration and UNESCO acclaim.  San Gimignamo is famed for its cluster of towers.   The two Torri Salvucci are said to have been built to bypass the communal statutes of 1255 that limited towers to the height of the Posesta towers.  But to show their superiority and annoy their rivals, the Salvuccis supposedly built these whose combined height surpassed the Ardinghelli family’s Podesta tower. 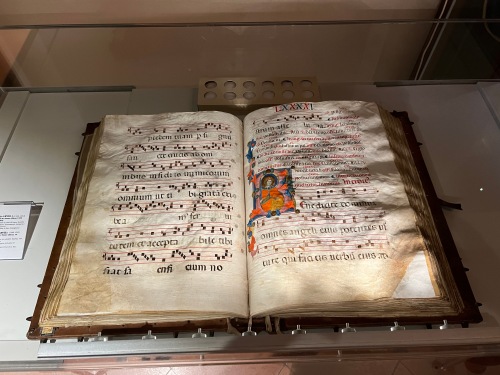 An early lunch on an outside terrace meant that we were able to wonder and admire this town streets with fewer people. 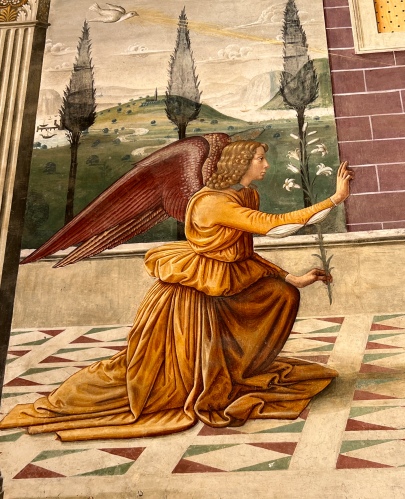 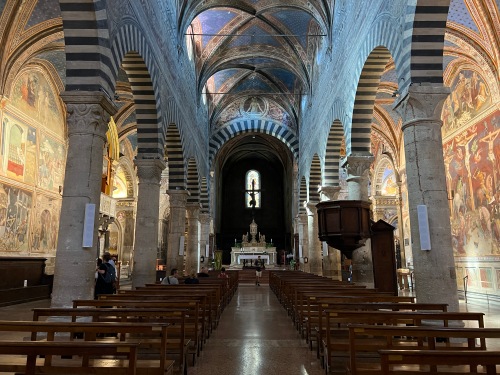 One can easily spend a few days here, visiting all the towers and old palaces, Duomo and churches and museums.

After San Gimignamo, we went to Pieve di Cellole also known as Santa Maria Assunta – a romanesque church dating back to the 11th century.  The parish buildings nearby were once used as a leprosarium but now house a monastery.  A wonderfully calm setting overlooking across the Tuscan countryside towards San Gimignamo. 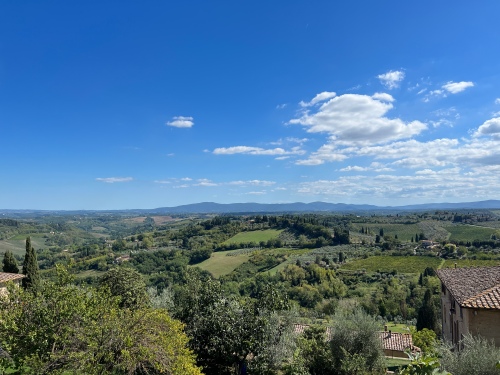 The nearest town to our litle country cottage was Volterra.  It sits atop a hill, surrounded by impressive ramparts.  It is not as well known as its neighbours San Gimignamo or Sienna, but with the Palazzo dei Priori, the oldest civic building in Tuscany dating back to the 13th century on the Piazza di Priori and its gorgeous narrow stone paved streets, an impressive Roman ampitheatre, it is well worth a visit.  It is now a thriving little town – there are very few shops selling touristy Tuscan linen and pottery unlike the other better known centres.

When the heavens opened up, we looked for somewhere for lunch.  We could not have picked a better place.  Porgi l’Altra Pancia is a tiny restaurant, that serves not only delicious home made Italian pasta, but now make their pasta upstairs so that they don’t contaminate the restaurant for their coeliac customers.  I had pici pasta for the first time – it is like a thick hand rolled spagetti, lovely and chewy. 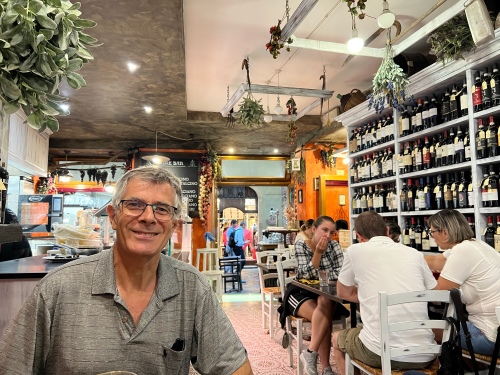 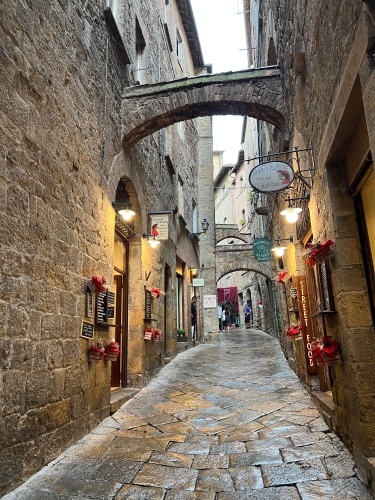 Visiting the many villages in Tuscany, I was constantly reminded that we were in an earthquake prone part of the world.  How some of the houses were still standing and safe is truly remarkable! 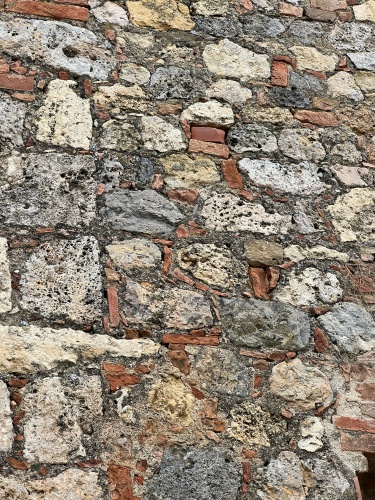 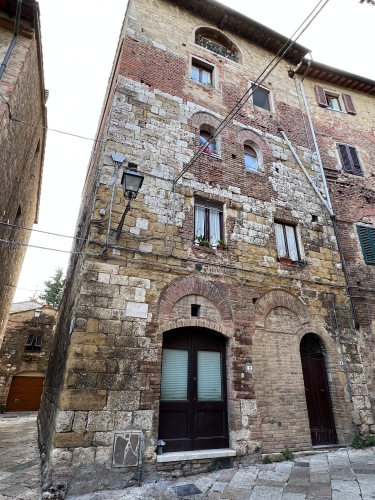 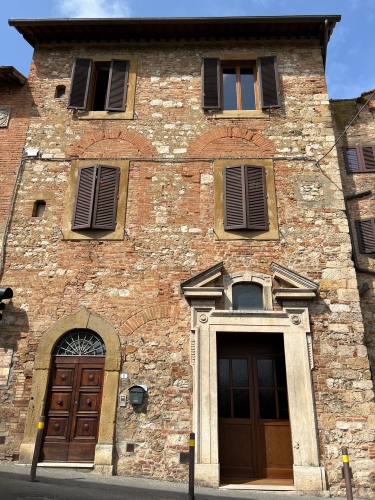 You have to embrace accidental photobombing!

The curvy cypress lined Tuscan country lanes were as photogenic as I imagined. Anthony was so patient with me, chasing one more photo, just one more country lane, before the next! We arrived a week after early plowing thanks to an unusually hot European summer so the fields were no longer golden. It would have been interesting seeing the ploughing: how they managed to do that on such steep hills had us baffled. 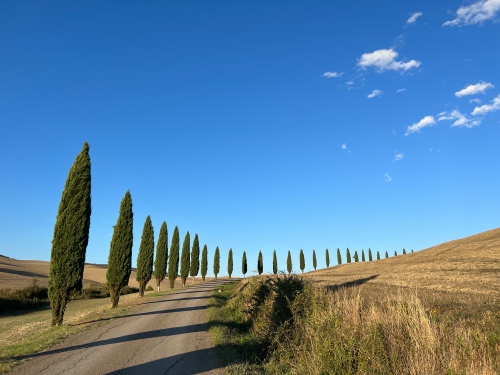 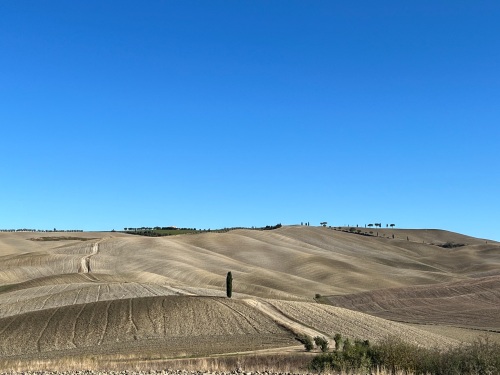 Tuscan countryside after ploughing is over 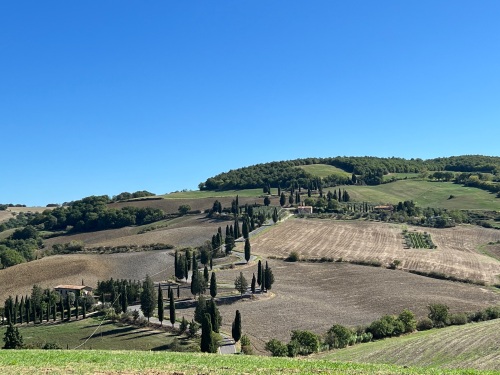 On our way to our next country, (can you guess where?!) I chose some stunning parts of Tuscanny to drive through. Thank you Tuscany, you were beautiful!