It has taken so long to write this blog entry and I cannot explain why, perhaps we were so busy in Iceland and afterwards that we have had not time, poor excuse. I did not enjoy Iceland? The experience was fantastic as were the people, so not that. I caught a cold, yes but no excuse. The only reasonable explanation (excuse) I can come up with is that I suddenly realised I am 64 not 63 this year, I have lost a year hence the delay, but gained a memorable Beatles song… Anyway whatever the reason for the long delay, back to present day Iceland…….

……….Touchdown, a firm, but not heavy landing at Keflavik airport in Iceland. We had been warned that strong winds could make landing tricky and earlier flights had problems and long delays. Low cloud had us just glimpsing the perimeter lights before landing. We are here in Iceland, the 98th country we have visiting in our travels. Keflavik Airport was the former Naval Air Station Keflavik, which played a prominent role in monitoring Soviet naval activity during the cold war, covering the seas between Greenland, Iceland and the United Kingdom, which was known by the acronym ‘GIUK gap’. The base which closed in 2006 has been proposed in 2017 by the US military for funding to build new hanger facilities for Navy surveillance aircraft in light of the deteriorating US-Russian relations.

We have arrived in our 98th country since we started traveling back in the 1970s. I think that a hundred is quite feasible, but since we have so many places to revisit, probably not much beyond that. We will leave those to other adventurers to discover.

The terminal has a strong nordic feel, clean lines, wood and stone and arriving and departing passengers mixed up, similar to Munich. We are surprised to find shopping trollies where I expected luggage carts. Locals are stocking up on beer, of which six litres can be imported duty free. Then reason behind this becomes apparent when one has to pay in excess of US$10 /€9 a beer in a cafe/resturant. A little research reveals that alcohol tax in Iceland is volume based, not the traditional alcohol percentage model, hence the stock up on the beer at the airport on the way home. They do have luggage trollies as well I hasten to add.

Our friend Kristjan, whose path we crossed from time to time on both our and his first RTW journey in 2014/5 is waiting for us. We are so pleased to see him. In 2015 my illness precluded us from visiting Iceland as planned, but some two and a half years later, we have made it. Kristjan is outside customs and we have a joyous reunion. It is great to catch up with a fellow traveller, and friend, again.

While Europe is being covered in snow and ice from Siberia, we are treated to rain and low cloud on our first full day: well low cloud anyway, the rain sound is caused by the snow tyres passing our apartment in the centre of Reykjavik that Kristjan and his wife Asdis, whom we have still yet to meet, have kindly lent us for our stay. Showering we smell the unmistakable sulphur smell associated with hot water delivered from volcanic origins. Luckily cold water comes from a different source.

We finally get to meet Asdis at their house over a sumptuous breakfast. It is great to finally meet Asdis who is very hospitable and friendly. Kristjan had sent us a detailed schedule of our activities, with him as the guide. We are very spoiled. Heading east through the fog we start to notice the barren nature of the landscape. It is treeless and the roads which wind their way through the chunky lava strewn landscape have no hard shoulders. We see cars off the road that are not coming back without the assistance of a tow truck.

Hellisheiði Power Station is our first port of call, like the prow of a boat, the visitors centre emerges mysteriously out of the mist, the largest geothermal power station in Iceland generating 303MW of electricity and 133MW of hot water. The water is piped some 27 kms to Reykjavik providing heating and hot water for the city. The insulated pipe only keeps the temperature loss to only 2 degrees celsius from the 80 degrees that it leaves the plant at. No wonder our morning shower was so hot! 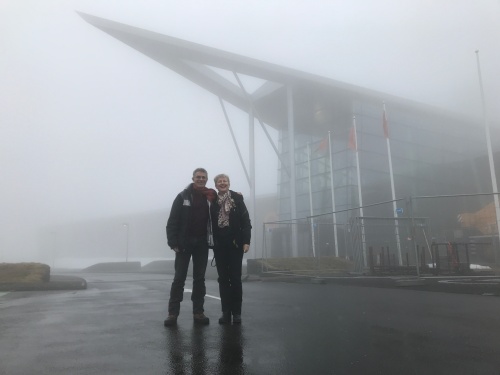 Here in the visitors’ centre we learn about the Eurasian and North American tectonic plates which are drifting apart at 1-2cm per annum. Iceland is the only place on land where we can see the effects of this. The fault line runs across Iceland and the Hellisheiði Power Station is situated on it. We are assured that the buckled floorboards are due to water ingress from a leaky ceiling, not seismic activity. I am not as reassured when I spy a wall panel indicating the previous major eruptions, 2010 then 2014 and I wonder if 2018 is next in this numbered sequence. Now what year is it again?

We head further east then south towards the coast. Kristjan keeps up a stream of facts, population only 330,000, the smallest nation to ever make the world cup finals. Two million tourists a year now visiting and not just in summer, our flight was pretty full. All the sulphur in the water is a corrosion issue for computer motherboards. I wonder if one day, after we have ‘solved’ the carbon and methane issues, sulphur will move up the leaderboard. I am surprised to learn that Iceland is slightly smaller than the US state of Kentucky, I would have thought much larger, perhaps the sparse population makes it seem so.

Taking to dirt tracks we visit the southern coastline where the the jagged lava has met the sea, almost devoid of plant life this landscape seems almost alien, Neil Armstrong practiced for the lunar excursion here in Iceland in 1967 as the lava surface was seen as a good approximation of the moons surface. One can see why. 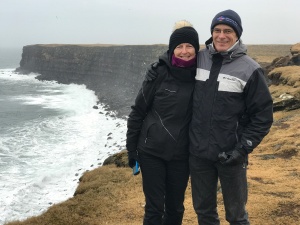 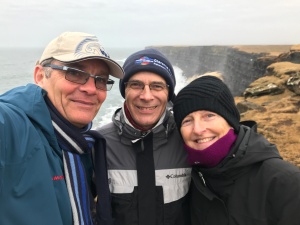 With Kristjan at Hafnarfjördur, Iceland 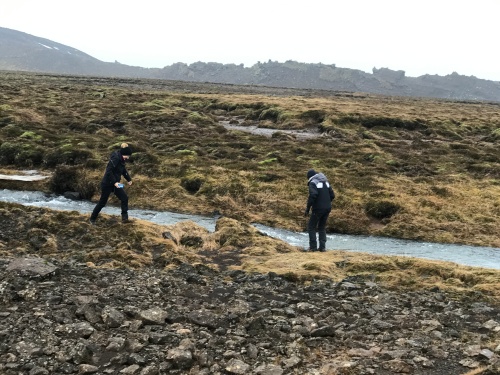 Trying to wash our muddy boots at Hafnarfjördur, Iceland

All the primeval elements seem to be in play at the same time in Iceland: fire, water, earth and air as one imagines molten lava (fire) flowing into the sea (water) forming earth and steam in the air. What must the first inhabitants of Iceland thought, although their first settlement at Reykjavik was close to low temperature steam which was used for heating, quite enterprising.

Lunch is taken at Bryggjan, a small cafe in the heart of the port of Grindavik. Here I am introduced to Icelandic Lobster Bisque, a popular local dish and very tasty too. As many refills as you want. A smattering of tourists occupy tables amongst the local workers who use this place every lunchtime. The impact of the massive growth in tourism reaching further into the countryside. 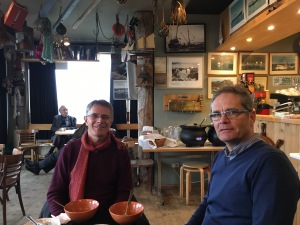 At the quaint Bryggjan restaurant

“Do you believe in pixies?” Kristjan asks us. “Of course” we both reply. While Icelanders may not necessarily believe in pixies or elves, they do not want to deny they exist, just in case. And so you find rocks around Iceland, that construction workers will not disturb but work around, just in case elves live within them. 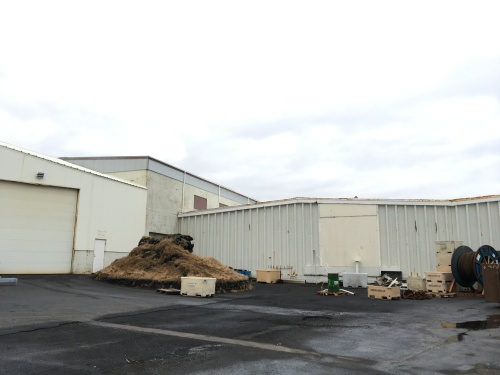 Do not disturn, Elves might live here, in Grindavik, Iceland 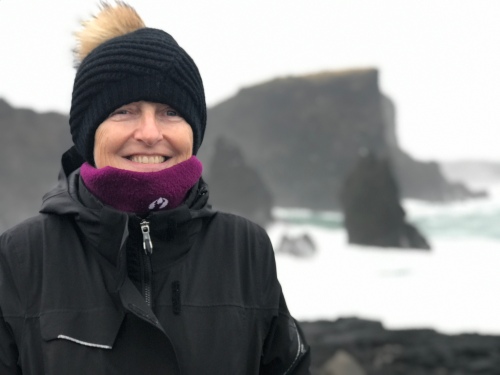 Love what Anne has done with her hair.

No 1st day in Iceland would be complete without a motorcycle travel presentation by the 2slowspeeds to the AGM of the Icelandic BMW Motorcycle Club. How did that happen, they moved the date of the AGM to coincide with our visit. ‘No pressure’ as Anne says until we learn two guys drove 480km to hear our presentation and are heading back tonight! We had a very friendly welcome and hopefully our ‘Iran and the Stans’ presentation may encourage someone to venture in that direction. Having said that, Iceland has some pretty amazing scenery and roads of its own. 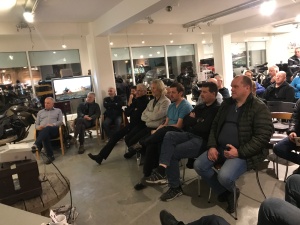 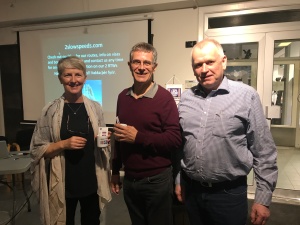 With one of our faithful followers, Gudmundur

Based on our first day, I think we will be back and exploring here in the future.