Going back in time, completing our camper van trip on to Rockhampton…

We have travelled almost 1,600 km. / 1,000 ml. to get to Longreach, which will be the furthest west we will travel on this trip. There are almost another two folds of the map to the western Queensland border still to be explored.  Winton amongst many other places will be for another time perhaps.

As we head eastwards, I reflect that each town we go through has made an effort to shine and attract our interest, focusing on one or more attractions.  In Ilfracombe, just east of Longreach for example, it is industrial machinery, historic guns and bottles. Someone commented that it was unguarded but nothing gets stolen.

Anne with an old tractor in Ilfracombe.

Barcaldine is known for its Tree of Knowledge. This famous tree was the meeting place of the strikers during the 1891 Australian shearers strike and Barcaldine was significant in the birth of the Australian Labour Party.  The tree stood for over 120 years since those events until deliberately poisoned in 2006.  The subsequent sculpture that replaced the tree pays homage to the tree in a beautiful way.

One of Barcaldine’s many pubs

The “Tree of Knowledge” monument at Barcaldine.

The Tree of Knowledge, Barcaldine Qld.

Monument to shearers strike of 1891 by Milynda Rogers

East of Barcaldine on the Capricorn highway we see little evidence of dead animals at the side of road leading us to believe that night driving by trucks on the main commercial routes, such as the Warrego Highway we came eastwards on, may be the cause. It gives us more confidence that we could ride our motorcycles out west if we limit our riding hours to avoid dawn and dusk.

For those of you who thought the names Emerald, Sapphire and Rubyvale were the gateway to untold fortunes, think again.  Only Sapphire is named after the semi precious stones found there.  The other two are probably wishful thinking on the part of the towns founding fathers, to attract settlers to their towns. Sapphire itself has a dilapidated air about it, probably because the miners focus on more important things and that a number of the businesses are up for sale. “Pat’s” can be had for 450,000 dollars including stock. We are not tempted to spend even AU $15 on a bucket of stone and sand in the hope of sifting a fortune.  However the date scones are another matter, and I think are a better deal. We meet Raylene and Jim, who we estimate are in their 70’s, who are travelling in a personally converted Land-rover Discovery 3. The interior is spartan but works.  They are also restoring a 12 bedroomed house they have lived in for years. That did not make sense until they mentioned they had 12 children!  Yet another lovely couple and another method of travel to digest.

At our next stop is Lake Theresa outside the town of Clermont, which is both the local water supply and boating spot for the locals. Here we meet George and Buff who are heading north to take part in the Southern Cross Annual 5 Day Poker Run for charity. They camp next to us with their motorbikes and trailers that have pop up tents with queen size mattresses inside.  Very impressive. Yet another mode of transport for us to consider.

We are now entering coal country, this part of central Queensland has 24 mines whose coal output feeds into Queensland Rail’s Goonyella system that hauls the coal to the coast for export. As we travel along the Peak Downs highway the only evidence we see of this is the road signs pointing to the coal mines, the massive trains that haul up to 10,000 tonnes of coal at a time and innumerable power lines that provide the electricity to make this all work.

We detour to Moranbah, a town which was built to house coal workers back in 1969.  Today it has a population of over 8,000 and a good range of amenities designed to attract workers and their families to live in the region rather than be FIFO workers. 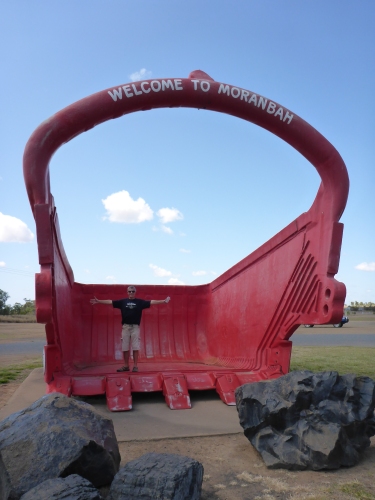 Now this is a coal bucket. 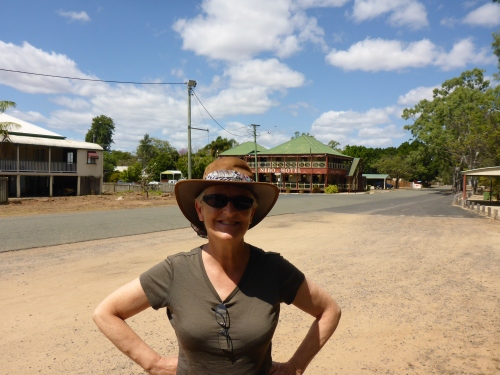 As we descend towards coast through the Clarke Range, which is part of the Great Dividing Range fields of green sugar greet us. We have left the brown landscape behind, we are back to the more familiar green and are closer to the sea.  While I enjoyed the inland, I think the coastal areas are where I prefer to be. Central Queensland has an interesting mix of industries, coal, cattle and cane.  All the “C”s.

Throughout the sugar growing region around Mackay, narrow gauge rail delivers sugar cane to the various mills,  While we crossed a number of tracks and did not see any trains, the white plumes from each of the stacks of the mills we passed showed that harvesting was in full swing.

I was surprised to find out that around region, Mackay Sugar have over 850 kilometres or 530 miles of narrow garage tracks that are used to bring the harvested sugar cane to the mills.  It is a very extensive network and keeps trucks off the road. This network extends more that 70km north of Mackay. 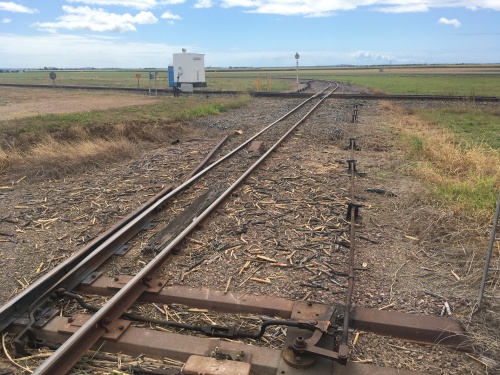 Our next stop, Cape Hillsborough National Park, sits across two rocky outcrops with a golden sandy beach connecting them. This park is famed for is beach kangaroos that feature in the latest Queensland tourist ads.The Coastal Eastern Grey Kangaroos – Macropus giganteus aquaticus  – Anthony.  Stop this nonsense next you will be talking about drop bears!  These are just normal Kangaroos that live near the beach – Anne. 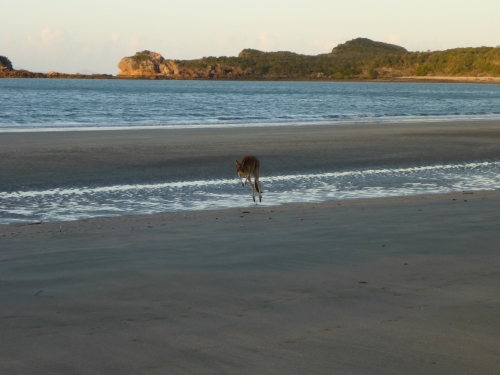 Kangaroo on the beach at Cape Hillsborough National Park.

PS: Drop Bears are a sub species of Koalas known for rather aggressive behaviour and the habit of dropping from the trees on foreign female backpackers who need protection from strong healthy young Aussie males in beer commercials – Anthony.  This it the sort of rubbish that gives Australians a bad name like hoarding toilet rolls. This is nothing but fake news – Anne

While the beach and adjoining headlands with their walking trails, one overlooking the ocean is where you can see turtles swimming, are beautiful, the caravan park is compact and too close together for us.  We have realised that while the camper van gives one all the comforts of home, in a hired vehicle one is restricted to tarred roads and an extension cord for the fridge.  We are much more comfortable in the open spaces that other forms of transport allow.

Anne can finally buy an ice cream to eat (she found a dairy free variety).

After Mackay we head to the coast to see where all the coal mined in central Queensland goes. Hay Point and Dalrymple Bay Coal Terminals.  These two terminals exported over 110 million tons of mostly metallurgical coal used in iron and steel making in 2019-20.  This is about three hundred thousand tons a day which is 30 fully loaded coal trains. Impressive statistics. Our photo does not justice to what is there, take a look on Google Earth.

The road to Rockhampton only touches the coast at Clairview. Here there are a few houses or beach shacks, no shopping facilities and a huge open beach. We enjoyed the open space and lack of people. No overnight camping is allowed outside the campground for vehicles such as ours keeping Clairview pristine.  It makes me wonder what other gems exist between Mackay and Rockhampton that are off the Bruce Highway. Another trip perhaps to explore the side-roads and see what lies there.