Our return trip to Oz coincided perfectly with an art fair in New York which I have participated in many times – time to see if the economic climate is good for me to hold another exhibition there sometime and great excuse to catch up with many friends.

Our timing was perfect as we got to New York the night before most airports on the east coast were closed for a whole day due to a massive snow storm. Luckily, we had our “moon boots” which we had used in Iceland. Just pity our ski bag with Anthony’s skis and most of our winter clothing did not make our flight for some reason, then it could not be sent the next day as the US airports were closed, then there was a strike at French airports! Anyway, Anthony would have enjoyed skiing down the streets of Brooklyn – the ski goggles came in handy though.

Snow is always so magical: 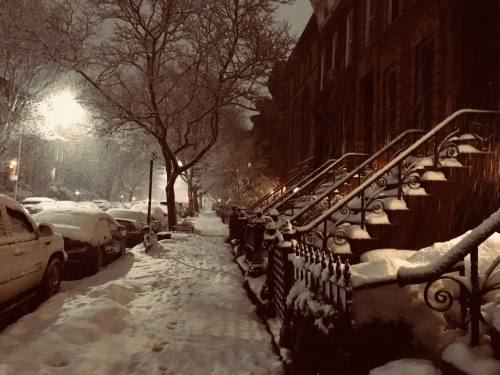 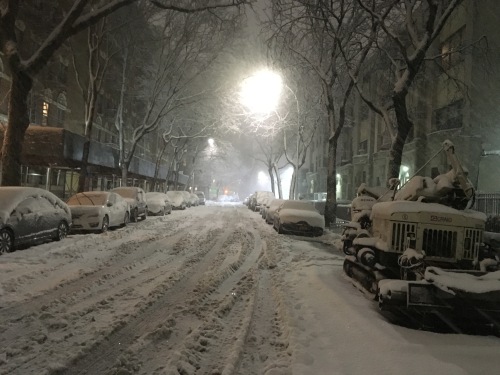 Being retirees, with more time but less $$, we decided to stay in an Airbnb in Brooklyn as hotel accommodation in Manhattan has become prohibitive for us. It was a different New York experience for us. The subway is so easy and handy.

It was worthwhile visiting the art fair every day over the duration of the exhibition, seeing our friends and meeting other gallerists, and checking out the galleries in Chelsea to get a full picture of the New York art scene. Based on what we saw, I won’t be exhibiting there again, not for the forseable future anyway – never say never! 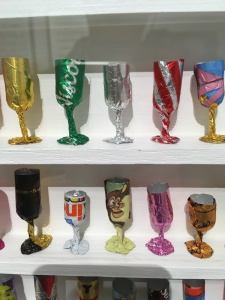 Close up of the above

After a lovely lunch with our dear friend Suzun, she and I visited a few exhbitions in Chelsea and walked along the fabulous High Line walk, and checked Zaha Hadid’s first building in New York. I’ve always loved Zaha Hadid’s work but I don’t understand why you would choose to spend millions on an apartment that High Line visitors can peer into…

A highlight of this New York trip was a tour of the Rockefeller Centre, the first time in my 11 visits to this city. As an art deco fan, what an absolute feast, made all the more enjoyable by having a very knowlegeable and passionate guide.

You will recognise this iconic, albeit staged, photo of real iron workmen taken in September 1932 to promote its new skyscraper – “Lunch atop a skyscraper”.

Lunch atop a skyscraper, photo taken for the Rockefeller Centre

A bit of background on the Rockefeller Centre for those interested:

Although John D. Rockefeller Jr. spent most of his life engaged in philanthropy, his defining business venture was the creation of the “city within a city”. The largest US project during the Great Depression’s worst years, built on 22 acres, the Rockefeller Centre construction started in 1931, employed over 40,000 people and opened in May 1933. Originally envisioned as the site for a new Metropolitan Opera building, the current Rockefeller Center came about after the Met could not afford to move to the proposed new building. The Rockefeller Center has two main parts: the original center (Radio City, for RCA’s radio-related enterprises such as the Music Hall and 30 Rockefeller Plaza) and the later International-style buildings (for foreign tenants).

Rockefeller believed that art should be an act of good citizenship: despite his priviledge and wealth, he never represented his class in any of the art, but wanted people who saw the building to relate to the people and scenes depicted – such as the long mosaic depicting farmers in simple singlets which was deliberately built at a level that could be seen by workers travelling past in the Elevated train line.

The art deco throughout the complex is exquisite: 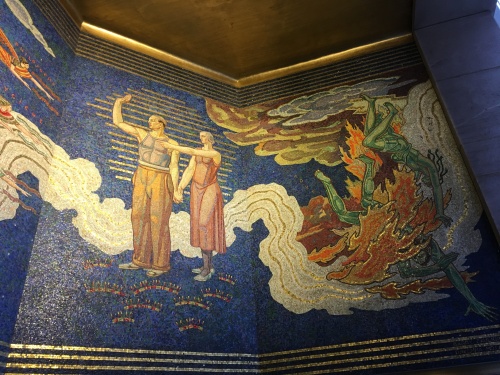 The British Empire building, where Ian Flemming wrote James Bond – and, we are told is still the first building to be secured whenever a security threat is apparent – is a mirror image of La Maison Française with the “Channel” running between them. 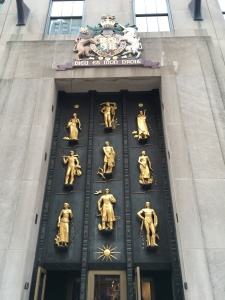 The Chanel between the British and French buildings, the Rockfeller Centre

I left a trip up to the Top of the Rock as something to do with Anthony – that will now have to wait for another trip to NYC.

Our visit also coincided with March for Our Lives, a student-led demonstration in support of tighter gun control following the deadly school shooting in Parkland Florida, which took place in major cities across the US and many places around the world March 25th, 2018. Gun control is such a sensitive issue in the US to say the least… It is inspiring to see that school students managed to finally start a serious dialogue on this sensitive issue and fascinating to chat with people at the rally, students, people who had flown to New York for the rally and local residents.

17 year old students from Pensylvania at March for Our Lifes, New York 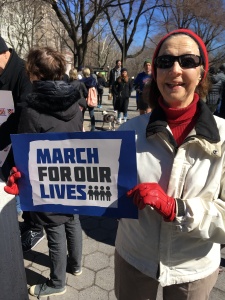 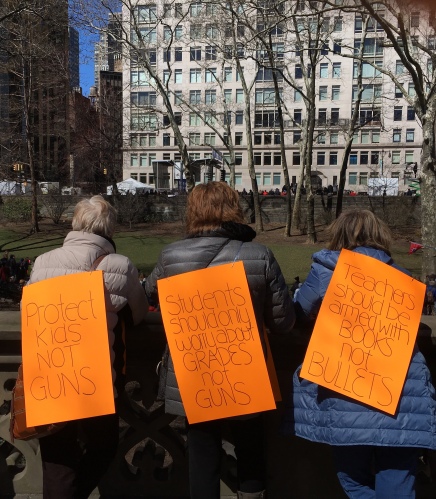 March for Our Lives, New York

March for our Lives, New York 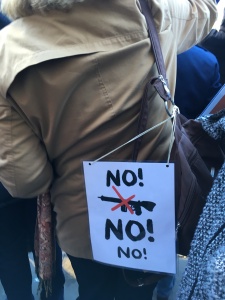 March for our Lives, New York

Our last exhibition was such a treat for me. The local Brooklyn museum deserves to be on the list of places to visit by any visitor to New York – it has some exquisite Syrian murals, Egyptian mummies and a copy of the Book of the Dead. 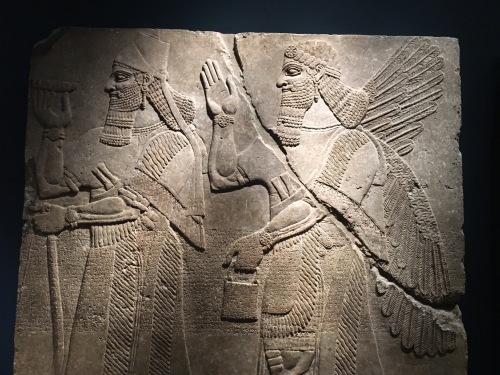 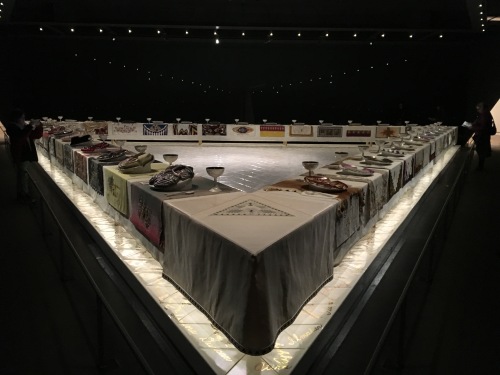 And then, we saw “David Bowie Is” – an incredible exhibiton for any David Bowie fan, on its final leg of a 5 year tour (it ends on July 15, 2018). All tickets include bluetooth Sennheiser headphones for a immersive audiovisual experience – the music, dialogue automatically changes as you move around the exhibition – or repeats if you feel like hearing something again. https://www.brooklynmuseum.org/exhibitions/davidbowieis. Together with Pink Floyd and Yes, David Bowie has remained a favourite of mine since my teens. What a feast it was.

David Bowie is with Anne 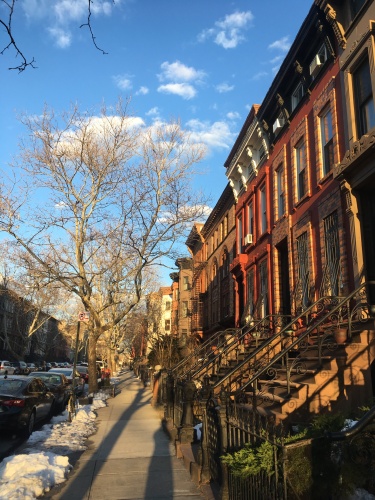 The next day, we made our long tedious journey home. What an amazing 7 weeks we have had – family, friends, exhibitions, experiences, and discovered (and fell in love) with a new country, Iceland. Now, it’s time to stay home for a while, get that redecorating done, continue the decluttering, catch up with friends, get fit again and welcome several overseas visitors. Ok, yes, and time to plan the next trip, which won’t happen until next year now…