We are on the move again, this entry comes as we fly across the Pacific from Brisbane to Los Angeles on a Qantas B747 to meet the sunrise on the same day as we left. Just before you drag the couch back from the side of the house where it has sat forlornly since engines-off back in October 2017, this is not a another motorcycle or 4 wheel drive adventure, but a family visit with a little skiing thrown in, for me anyway, en-route. There is however a new country, with a motorcycling connection, we will be visiting. If that piques your interest do keep dragging the couch back towards the house.

We have found that there is a patten forming with our travel: even years, surgery for me with a non-motorcycle journey and odd years, riding Streak and Storm. Some may say that we were on the road in 2014, but that was the start of the journey, so no pattern had been established. Surgery? I like to try and spread the work around, having supported cardiac and orthopaedic surgeons in the past, I thought that this year, the eye surgeons should have their turn. April and May will see me undergo cataract surgery as the gradual decline in vision, that we all suffer to a greater or lesser degree, due to cataracts has reached a point for me where correction makes sense from a medical and personal point of view, perhaps being able to see the road ahead more clearly will have me heading for the couch instead.

On the home improvement front, progress has been pitiful, the extensive list we drew up on our return has two items ticked off, new blinds installed and the front door painted. While matt paint on the door worked ok, my attempt at window frames with gloss paint produced one blotchy result, probably due to poor preparation, oh well we can push that down the track for a while longer, maybe this is why the open road is so appealing and we do think about it often. Anne recently said “what about a quick motorcycle trip down to Iran from the UK?” on Streak and Storm to see our friends who we sadly had to miss due to not being able to secure Turkmenistan visas in 2017. We will get back there someday, but not this year. I have suggested to friend that he comes on a Southern African adventure, he has all the riding and mechanical skills I lack. Another friend has been trying to get us to ride with him in India, the local gods protected us once, but we do not want to try our luck there a second time.

Catching up recently at a couple of barbecues with other RTW motorcycle riders reminded us of all the places we would still like to visit, plus wishing to spend more time exploring in more detail some of the regions we visited on Streak and Storm, too many choices not enough time. Can we stay settled and at home with all the open roads whispering in our ears?

I was feeling more attached to being home as we locked the front door to the point where I just had to go back inside, to remove the batteries from the smoke detectors that were going off due to the mist from the insect ‘bombs’ I had initiated before we left, seemed like great idea at the time! Then back in again as then the mains powered sensors went off as well. Hopefully that has all abated now, when we turn our phones back on in Los Angles, hopefully they will remain silent.

Skiing will be interesting as I have not skied since 2014 in Austria and I suspect my limited skills, as they were then, have atrophied and will be sorely tested by the mountains in Utah and Wyoming. It will also be sad as Anne will not be skiing with me. Anne has decided that she wants to save her knee for other activities and that it time to hang up her ski poles – hard for someone who used to ski from patch to patch of snow between the trees in Switzerland in her teens. I may well be joining her after the first run but it is realistic to realise that the ageing process robs us of capabilities over time and it is better to call it a day sooner rather than after an accident than ends both that activity and others. 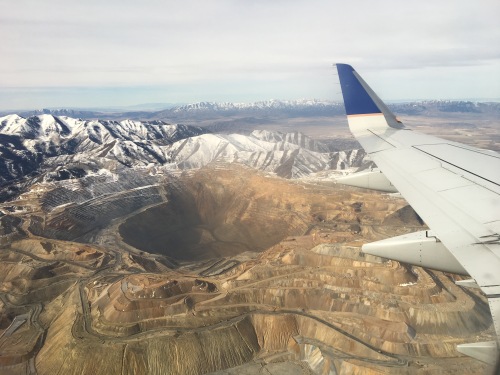 Descending past the Bingham Canyon Copper mine into Salt Lake City

So for me from here on it’s downhill all the way! We will see how that turns out in the next week!