The joy of travelling with no fixed route or destination or timetable is that you invariably stumble across more unexpected gems. Today was another such day. Another road closure along state route 20, a reputedly scenic route in the area, that would take us from the fruit growing area of Okanogan across the Cascade Mountains is closed in a couple of areas due to a number of landslides – pity as we were really enjoying the gentle scenery of rolling hills after the dramatic snow capped jagged peaks.

Outside Okanogan along US20 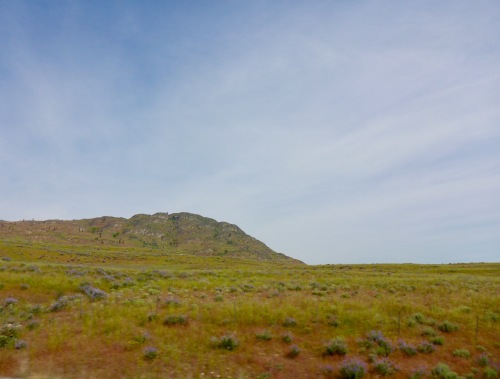 Outside Okanogan along US20

Fruit stands line the roads, hundreds of empty wooden boxes waiting for the fruit picking season to begin – the last couple of days have seen temperatures reach 30 degrees centigrade and we get delicious wafts of fermenting fruit as we drive by.

After an 80km detour, we are back on Route 20 entering the Methow Valley and stumble across a sign advertising espresso coffee on the outskirts of Twisp. Oooh, yes, let’s turn off: real coffee is so rare here in the US and it’s time for a stop. The place immediately looks interesting and it is not long before we are chatting with Dan the founder and owner of Blue Star Coffee Roasters and get a tour of the production area. It was fantastic seeing his modified and updated 1963 German Probat 22kg roaster – all those various pulleys, chains, manual levers. The whole process is completely manual, no fancy electronic gauges or monitors. And yes, the coffee was superb. Funnily, a week later, a friend we visited outside Seattle had Blue Star coffee at home!

Dan Donahue of Blue Star and his 1957 Probat coffee roaster

An hour and a half later, we are off again to give the local Smokejumpers a visit. This region, the Methow Valley, is the birthplace of smokejumping where, back in 1939, the first experimental jump was made to prove firefighters could safely and successfully parachute into the rugged timbered terrain and attack wildfires. 58 succesful jumps helped determine how best to land in inaccessible areas and 2 smokejumping bases were created, one here and the other in Missoula. Apart from the bravery of those souls willing to parachute into a burning area, it was interesting to learn that every firefighter suit is made to measure on site. The firefighters, in addition to having to be incredibly fit to carry 70kgs on their backs for up to 3 days, being able to parachute and get themselves out of trees when they inadvertently get tangled in branches on their way down, also need to be proficient with the sewing machine. 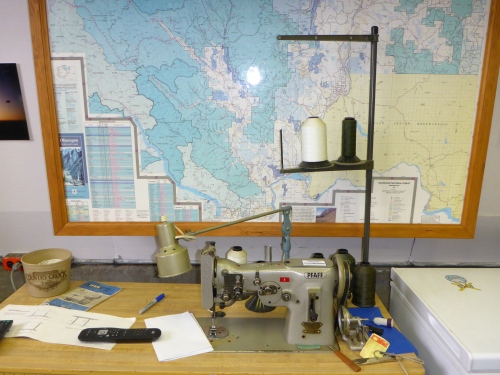 A couple of hours later, we’re off again and stumble upon Winthrop with its 1890 old Wild West store fronts and wodden boardwalks. Time for another stop and a sandwich. 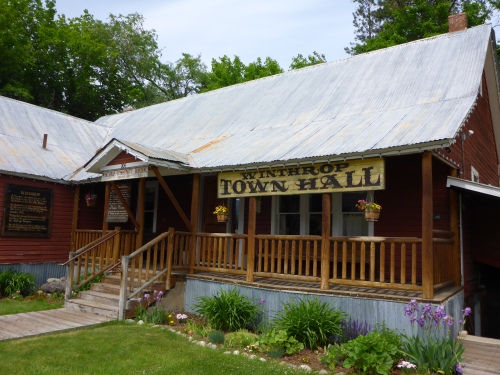 From the gentle rolling hills of the Okanogan and Methow Valley, we now continue along the North Cascades Highway and find out the reason for its name: sheer cliffs and multiple cascades shooting down along the highway. We climb up over Washington Pass, past more snow and impressive Liberty Bell Mountain. Then we see an ominous road sigh: severe winds warning. Shreds of pine branches litter the road. I am sure our training of riding in Cape Town and South America came in handy but it didn’t feel like it. The wind was truly brutal and it was scary but apart from taking shelter in a toilet block overnight and hoping for the wind to die down the next day, we had to soldier on. Pity as it is meant to be a stunning area. Anthony’s calming encouragement on the way down was very helpful. Luckily, the weather gods were kind enough to hold off raining until we got out of the windy area. Time to find a motel and stop for the day. We stop at the first one we come across, it is a querky little old place, we are the only guests but it is perfect for the night!! Amazing what feels good sometimes!! And that US 20 was amazing. 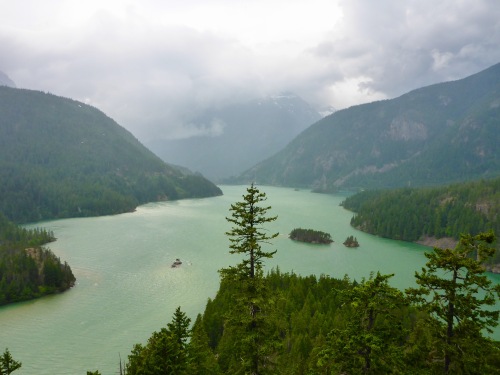 We are getting close to our original destination: Vancouver, the place the bikes are to be serviced and where we leave for South Korea from. First a breakfast catch up with Susan from Horizons Unlimited, catch up with one of Anthony’s second nephews, Gareth and his gorgeous girlfriend Mimi and finally dropping off the bikes at BMW-Ducati for their 45,000 miles service and new tyres. We chose Heidenau Scout K60 as they performed so well for us last time. We leave Justin with a list of things to check and fix on the bikes and head south in a hire car to Seattle for a couple of days to see an old friend. 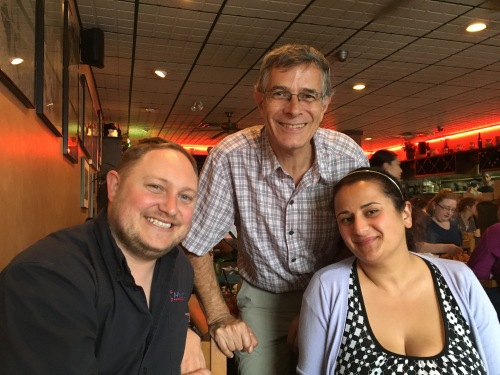 Anthony with Gareth and Mimi

Back in 1985, Anthony and I hitch hiked to Alaska from Edmonton, Canada. A family moving from Seattle to Anchorage eventually picked us up – what fun travelling on top of a double bed in a dump truck for 2 days, watching bears along the road – and invited us to use their home as our Alaskan base. We would disappear for a few days, come back, camp in their front yard, do our washing and head off again. During that month, we formed a strong friendship, but over the years, one move too many and we lost touch. I recently found Elisa again thanks to my decluttering at home: I came across an old address book and found her parents’ address!! A quick search through Facebook and I found her and her son!!! Meeting up again 32 years later and having her kids want to come over to see us again was so special. Just as if we had last caught up a few weeks ago.

Finally together again after 32 years with Karen, Elisa and Anthony 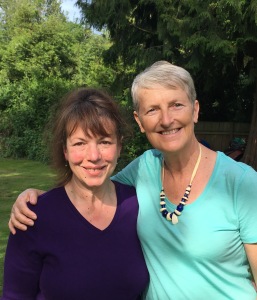 We make the most of a clear day to go up Mt Rainier:

At Paradise, on Mt Rainier, WA

Well, this North America section of this trip is coming to an end. It didn’t turn out as we had originally ‘planned’, hoping to revisit Alaska, but the wild weather has sent us on a windy South West heading before turning north again. Most days, we had no idea where we were going to end up at the end of the day. We have definitely enjoyed this freedom to go where we feel, where locals recommend, stay somewhere longer than expected and where the weather was less bad!!! No wonder many of you had no idea where we were, we didn’t either!!

We leave Vancouver on 11th June for Seoul, with the bikes on the same flight as us, then leave South Korea from Donghae on 18th June for a 24 hour ferry ride to Vladivostok. Wish us luck!!!