With a new clutch, and you can tell the difference when driving, fuel leak fixed and the handbrake adjusted, we set off westwards from Kolmanskop towards our next destination, the Fish River Canyon. Another well known tourist spot in Namibia, reputed to be the second deepest canyon after the Grand Canyon in the USA. After so much dirt road driving, its quite pleasurable to be on tar again. The temperature rises quickly and we are soon back into the high 30’s after the cool of Lüderitz.

We cross the Fish river and turn south on the C12, the surface seems a little rough for such an important road, but as we progress further south I realise that due to a washout, the authorities have moved the C12 to an adjacent road. The map I used to navigate here is out of date, but the GPS is correct. Always worth cross checking each of the map/GPS sources if you have them.

The fish river canyon is not crowded and we are able to wander along the edge alone surveying the vastness and depth of the canyon. Due to the heat, the Park Authorities have closed the walking trails, not that I would want to walk far anyway.

Breakfast at the edge of the canyon early next morning is our last in Namibia. Coffee and tea in hand, we watch the sunrise, through the clouds highlighting different facets of the rock below us. 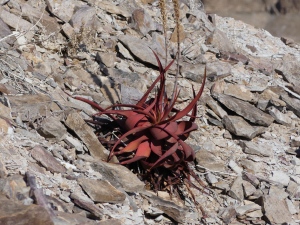 Anyone identify this plant at the Fish river canyon?

During some of our travels the road has paralleled railway lines. In the north of the country the railway is used to transport petroleum products to major centres from Walvis Bay. Thus keeping the petroleum tankers off the roads, not a bad thing. We have seen no trains in the south, however we have been told that the Chinese have been rehabilitating the railway from Lüderitz to the junction at Seeheim. We had not seen a single train south of Seeheim, which is the link to South Africa, until we came across a loco and single carriage heading north out of Karasburg.

Engine and one coach leaving Karasburg 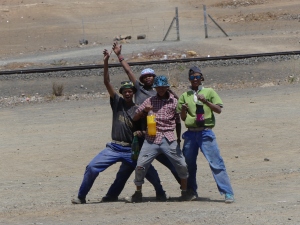 As we head towards the South African border, I reflect on all we have seen and done here in Namibia. We have covered a significant distance, met interesting people and seen a diverse set of landscapes. It would have been nicer to have more temperate weather, but perhaps the remote areas would have been more populated with 4×4 vehicles and then less to our liking. All in all we have had a fabulous time.

We pass Sishen, which is the 11th largest iron ore mine in the world, measured by remaining reserves. Infastructure stretches into the distance. Mining equipment, rail networks, shopping centres and housing. I understand that only 18 years of reserves exist at the current location and wonder what happens if no more commercial reserves are developed? 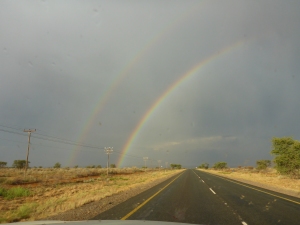 Our first rain – with double rainbow

Our first destination back in South Africa is Elgro River Lodge, a conference centre and game lodge on the banks of the Vaal river, south of Potchefstroom. Our reason? To attend the 3rd Horizons Unlimited South Africa Adventure Travellers Meeting. Horizons Unlimited (HU) http://www.horizonsunlimited.com is an organisation for motorcycle travellers such as ourselves. HU was founded in 1997 by Grant and Susan Johnson following their journey around the world on a BMW R80 G/S motorcycle. This event provides a great opportunity for motorcyclists to meet and exchange information as well as attend presentations and workshops.

Who looks away first loses

We attended our 1st and only HU event in Queensland a couple of days before we left for Europe in September 2013 and look what happened to us on motorcycles! What we found was an exceptionally well run event by Korbus and his daughter Claudine. We reconnected with Grant and Susan, met a lovely Dutch/Australian couple Richard and Steph just starting their journey from Cape Town to Amsterdam . Oh the memories of starting a long distance trip. We are envious, but so pleased for them. What great adventures await them.

We spend a couple of days with like minded individuals who have travelled extensively in Africa and beyond. We enjoyed our time there even though we were not on motorbikes.

11 comments on “Fish river to the Vaal river”