Anne has brought me to the Marienfluss valley in NW Namibia. It is a majestic and remote place, the reds and browns of the mountains contrasting with the greens and yellows of the trees and grasses. We are lucky to have had the valley to ourselves for a day after the departure of the other group of campers yesterday. When I look out over the the Marienfluss, I think this is what many parts of Southern Africa must have looked like a long time past. The difficult road access keeps the number of visitors down to hardy 4×4 enthusiasts who are willing to take vehicle and body over some of these rough tracks and the rich who can fly into fabulously appointed lodges with hot and cold running everything.

As we prepare to leave Syncro Camp, our campsite besides the Kunene river, I will not miss the sight of the crocodiles either on the banks or in the water. One less thing to eat me as all the rivers south of here are dry at this time of year. I only have to worry about lion, leopard and the other carnivores which might find me a tasty snack. It is simpler in Australia, just don’t hit a kangaroo while driving, it’s about the only way they can kill you. 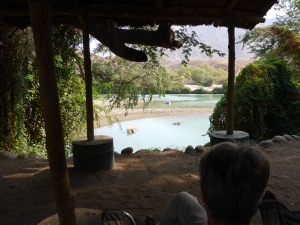 The Marienfluss is the only valley I am aware of that has a mountain in the middle, but connects at both ends. Usually I find a mountain separates one valley from the next. This allows for a completely different scenic outlook on the return journey down the same valley. The photos we have taken do not capture the full beauty of this place.

Arriving again at Rooidrum, (Red Drum) we head west, we have been told the road is heavily corrugated, but it will have passing places which the direct route does not, with it’s burnt out 4×4 and rocky sections. Neither of us fancy trying to backup a hill on rocks. The section to blue drum is ok and we added our 2slowspeeds sticker to the satellite dish, non functioning I may add.

We are now in the southern end of the Hartmann Valley. We decided against doing the northern end of the valley following advice from locals due to the time of year and lack of other traffic. We only saw a single government vehicle today in over 8 hours of driving. We had no expectations regarding animals, then suddenly a small herd of Gemsbok. Another first for us.

Oryx family in the Hartmann Valley

After three bone shattering hours of corrugations and dips, on this part of the road, maintenance must be sponsored by local dentists and chiropractors, we reach Orupembe. Here the local store offers cold drinks. A refreshingly cold coke is purchased at a price below what I pay at home in Australia – amazing for such a remote location and the owner, Maria, is happy to pose for a great photo.

Slowly we progress. We try the Khumib riverbed which is dry this time of year, but found too many corrugations there, so up onto the 4×4 track, past a family of Himba selling souvenirs. Great location, but we are probably the first customers all day. We have to stop but nothing takes our fancy, mostly because we couldn't bring them back into Australia due to quarantine restrictions, so onwards and upwards heading towards the Hoarusib river, another dry riverbed.

The tracks alternate between the riverbed and the riverbank and I suspect the route moves from year to year. Travel time is slow as the surfaces vary so much, stone, sand, rock all seem to seek our attention. Occasionally we make 4th gear, but more often than not 1st and 2nd are the order of the day. We have averaged 20kms per hour today along the river, up over the mountain pass and down into the Hoarusib valley

Tonight we will 'wild camp' as they say, pull over, pitch the tent and sleep under the stars and at least 500 meters / 1500 feet from the riverbed as the elephants can get upset by too closer human presence. Our first attempt to reach the higher ground is defeated by the slope. Reduced tyre pressures and further driving effort on Anne's part, we succeed. Our beautiful wild campsite overlooks the Hoarusib river.

Tent up, with one eye out for animals, into the tent and then 10 mins later we take it down! Too windy, we almost loose the top sheet. It will be an uncomfortable night in the 4×4 for us. Oh well…

Dawn sees the sky brighten from the east and we found we slept surprisingly well, the seats in the 2016 Toyota Hilux turned out to be quite comfortable. We head south again road into river sand but not too bad, saw a few springbok and signs of other animals. What has been puzzling me is the number of animals but apparent lack water in the rivers late in the dry season. My question is answered an hour later as we prepare to cross the Hoarusib riverbed once again, water flowing! It is surrounded by green vegetation and the air is full of birdsong. This scenery continues for a couple of hundred meters, then the river disappears underground. Up a rise, we are back to dry and desolate, as we have seen in many places.

Green amongst the brown on the Hoarusib river

We finally reach the town of Puros after driving across about 10 km of gently undulating hard sand, such a pleasure, one wants the track to just go on forever.

15 mins out of Puros

We feel we are back in civilisation after not having seen a single vehicle in two days. We know where we want to go back too.

5 comments on “South from the Marienfluss”