We are in Welgelegen, a suburb of Cape Town where we have been staying Bob, an old friend from our time here in 1983 – 1985, his wife Marina and their daughter Tara. We have been enjoying their wonderful hospitality since our arrival via Maputo a few days ago. Today we will be back in the saddle, only days after riding Streak and Storm back from Spain into storage. Bob has arranged a five day adventure up the Cape Garden Route to Knysna for the three of us.

Cape Town has been unseasonably cold and we are wrapped up warmly for our departure. Traffic is light as we head east towards the jagged peaks of the Borland mountains we once knew so well and rode through on many weekends when we lived in Cape Town. This is a slightly strange journey as we are seeing so much again that we have forgotten over time, so what is new, revived memories or just déjà vu?

We are soon heading up Du Toitskloof pass which, until the opening of the Huguenot Tunnel in the late 1980’s, was the main route connecting Cape Town with the interior and beyond to Johannesburg. The road has much less traffic as the tunnel takes 7 miles or 11 kilometres off the journey. It is spectacular scenery on both sides of the pass.

I recall once when Anne, Bob and I were riding up Du Toitskloof pass: first Anne, then Bob were blown by the strong wind towards the edge of the road, I crossed into the oncoming lane and was blown back to where I started from. It pays to be a follower sometimes!

We quickly reach Worcester, where we leave the busy N1 behind and take the more tranquil R60. We are heading for the R62 which is known as Cape Route 62. This has become an inland tourist route linking the eastern and western cape. Thirty years ago, this was a road connecting farming communities, today a thriving tourist industry has grown up alongside the traditional farming, witnessed by our stay in Calitzdorp on the first night with its boutique guest houses, coffee shops and restaurants. This has rejuvenated many of these small country towns.

Bob with his Royal Endfields in Calitzdorp, South Africa

An interesting feature of major South African roads is a wide well built hard shoulder which allows one to move over for faster traffic on two way roads, allowing for better traffic flow. In 95% of cases of our moving over, we are the 2slowspeeds, two flashes of emergency lights thank each of us in turn. A good idea I think, so take note all you roads planners, wide well built hard shoulders please.

Morning tea on our way to George, South Africa

En route to Knysna, we visit the Railway Museum in George. The converted goods shed holds an large array steam engines including a number of impressive Garrett’s with a 4-8-2+2-8-4 wheel configuration that I used to watch as a teenager in Pietermaritzburg, producing clouds of smoke as they climbed up the hills to the east and west on the branch lines. A large rail layout holds our attention, just insert five Rand to watch the trains go round. I could stay all day if I had more coins! 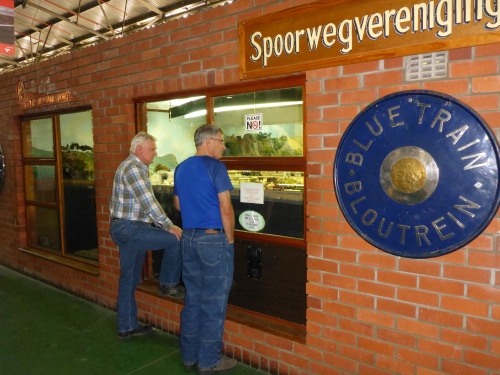 You may have noticed the careful placement of the Royal Enfield’s in some of the photographs. These modern classics attracted attention wherever we stopped. So different from today’s large sleek tourers, with just a small bag strapped to the back for five days’ travel. Bob has an interest in a Cape Town motorcycle dealership, so we suggested a few promotional photos should be taken which have ended up in the blog.

As we travelled from George to Knysna, I noticed that virtually all the smaller houses in areas that would have previously been called townships have solar hot water. There has been a concerted effort to provide more people with sanitation, water, power and housing in the last 20 years and this is one example of how this has been delivered. I was surprised at the growth in so many of the towns along the coast. I understand a combination of retirees and overseas buyers has led to significant development. I hope this does not end up spoiling the Garden Route.

In Knysna, as we enjoy a cold beer before dinner at a local pub, we are joined by a young guy keen to show us a length of large diameter plastic drainpipe? Ah no, not drain pipe but a handmade potato canon. Fuelled by hairspray, with a built in electronic ignition system he proudly aims over the building some 30 meters, 100 feet away and ‘bang’. The projectile blasts into, not over, the building. ‘Needs more hairspray’. As we wait with trepidation for a repeat performance, wondering what the strain tolerances are on the various joints, we are saved by his friends who encourage him to return the canon to the car. Minutes later, a lance of flame from the car park, more hairspray no doubt, sends another projectile into the night. We make note not to chose a restaurant in his line of sight but did like the carefree attitude he had.

Our return ride to Cape Town took us through a wheat belt in harvest in spring. I had forgotten about winter wheat, something we learnt in Geography at school. Hermanus, has grown to be unrecognisable and not our kind of place, but we did see three Southern Right Whales close inshore from the car park.

Neither my inadequate words or Anne’s photos can fully capture the view we had riding along Faure Marine Drive on the eastern side of False Bay looking over the blue ocean to a series of mountains and plains stretch in a horseshoe shape to Cape Point. We knew we loved this region to ride when we lived here and the last five days has confirmed that fact.

We covered over 1300km on some great motorcycles. Our second tour on a Royal Enfield, thanks Bob for organising such a great trip.

The rest of our time in Cape Town was spent reconnecting with several old friends. This deserves a separate blog post which will follow.

We now leave for Johannesburg and the next stage of this trip to Botswana and Namibia. Given the remote locations we will be visiting and the lack of internet I am afraid you will have to make do with blog reruns for the next month. We will resume regaling you with our tales in early November.

12 comments on “Déjà vu and memories”