Yes, I know, I may be accused of plagiarising part of a movie title, but there is an element of truth in this statement. If you recall the end of the Anne’s last blog, she mentioned we changed our travel route. When we made the original plans for southern Spain, I was sick and Anne had to make decisions on where to go, but sensibly made refundable hotel bookings. While in Granada, and after Toledo, we were looking for something a little different to yet another famous historic Spanish town teeming with tourists, so I suggested since we were so close, Gibraltar. This location would also allow us ride the A397 from San Pedro de Alcántara which we had been told was a great motorcycling road by a friend.

While accommodation in Gibraltar was prohibitively expensive by our standards, we found that Algeciras across the bay was very reasonably priced compared with all the holiday destinations along the coast from Malaga to Estepona. This is probably due to the unseasonably hot weather in early September which seemed to have attracted more tourists to the region.

So why Gibraltar some may ask? It just seemed an interesting location that we were close to, had never visited and seemed a little different to the historic places we had visited, or planed to visit in the region. Our first glimpse of Gibraltar came as we breasted a rise on the A-7 heading for Algeciras, towering over the surrounding low hills, an imposing sight.

While we are using Algeciras as a base for four nights, Anne felt we should travel on Saturday 10th to Gibraltar. No particular reason, it just seemed right. Over the years we have always followed our intuition even when we don’t know why. While Gibraltar is only 20 minutes by road we had heard of potentially long delays at the border, so we approached with no expectations of how long this crossing process would take. The approach, with the ‘Rock’ stands tall in the distance growing larger as we approached.

The border crossing was easy, see Borders and Crossings for details, the next step was to cross the runway! With the shortage of land in Gibraltar the only place to build a runway was across the access route to Gibraltar so both road and air transport share the same ground. 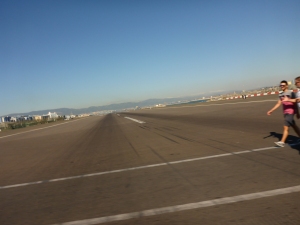 The ‘Rock’ now towers almost vertically it seems from the motorbikes some 426 m (1,398 ft) above us as we head to the eastern side. One can understand the trepidation the various forces that besieged Gibraltar over time would see in their approach from sea level. For those interested in Gibraltar’s history I suggest looking at ‘History of Gibraltar’ on http://www.wikipedia.org.

The east side is sparsely populated and the only road winds between sea and soaring mountain, traffic is light and we glimpse the remains of fortifications and tunnel entrances that honeycomb the rock. We travel southwards and come across the Dudley Ward Way tunnel, which connects the east and south of Gibraltar. The tunnel was built by the Royal Engineers who built many of the 55km of tunnels that exist inside the ‘Rock’ that in WW2 were capable of supporting 16,000 troops. The Royal Engineers had been in Gibraltar for hundreds of years and a statue to them can be found off Main Street.

We emerge near Europa point to see the Ibrahim-al-Ibrahim Mosque. The only one in Gibraltar, built for the 1,000 muslims living here. They are part of such a diverse ethic history which includes Andalusian Spanish, Genoese, Maltese, Portuguese and British.

Europa point seems so close to Africa which is clearly visible, such a small gap for the Mediterranean Sea to be connected to rest of the world and why Gibraltar was such an important Naval base in its time. We see a memorial to WW2 Polish Prime minister Władysław Sikorski who died in air crash in Gibraltar on 4 July 1943. This was our second link to the Polish war effort in WW2 after our stay in Saint Jean de Luz with the evacuation of Polish soldiers after the fall of France in 1940. It has been interesting to read up on Polish involvement in WW2 after the fall of Poland in 1939. Sometimes we spend more time reading and researching on what we have seen after each visit than before!

Lighthouse at Europa Point with Africa in the background.

As we approach the centre of town, we start to notice people dressed in red and white, Gibraltar flags appear at windows in the apartment blocks we pass. Today, 10 September, is Gibraltar’s National Day commemorating Gibraltar’s first sovereignty referendum of 1967. We learn that in the past the day has had a more political focus, but nowadays there is more of a party atmosphere. Now we know the reason of Anne’s intuition for coming today.

Spain still wants the return of Gibraltar to Spanish sovereignty after over 300 years. It is ironic that the original British/Dutch invasion in 1704 was on behalf of the Austrian claimant to the Spanish throne in the war of the Spanish Succession. It will be interesting to see where Brexit leaves Gibraltar, especially with the comments by Spain’s acting Foreign Minister Jose Manuel Garcia-Margallo recently on joint sovereignty.

We wander the streets in the older part of town where people and even their pets are dressed in Gibraltar’s colours of red and white. The main street meanders through the town, we notice an interesting mixture of UK names such as Marks and Spencer and other stores whose names reflect the diverse origin of the inhabitants. 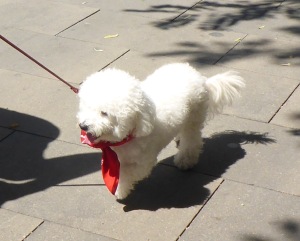 While being whisked up to the top of the ‘Rock’ by cablecar, one gets a new perspective that is not possible from sea level. There has been a large amount of development westwards with new apartment blocks, but no skyscrapers. A breathtaking series of views and a large number of Barbary macaques, monkeys to the uninformed, await us. We have been warned they like food and spectacles. So I walk around without mine as a precaution. I will have to look at the photos for a clear picture of what I saw!

Why we go to the top of the mountain. 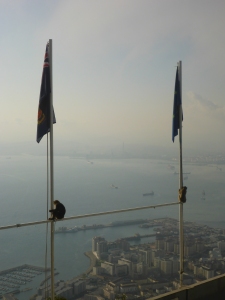 Monkey business at the top of the rock. 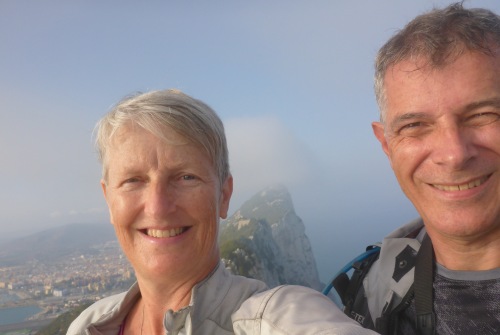 We are on top of the world!

Our departure is delayed by waiting at traffic lights for a large jet to take off. Probably the only place where this occurs. We are glad we decided to come here to see and learn a little about Gibraltar.

Waiting at the traffic lights for a plane to takeoff!

14 comments on “An unexpected journey”