We have given ourselves 3 days to get to Granada with no plan whatsoever. We never planned on stopping in Madrid on our way to southern Spain but had left ourselves open to the possibility. However after such a relaxing time in and around Santo Domingo de Silos, Madrid is definitely off. Where to next? Anthony mentions Toledo as a possible next stop as it is just 70kms south of Madrid – funnily, I had marked a campground in Toledo on my map as a possible stop over place. Great minds think alike – but it has now become really hot so camping is off and we book a hotel for 2 nights.

Toledo, declared a UNESCO heritage listed site in 1986, is renowned for its location, architecture and historical co-existence of Christian, Muslim Jewish cultures. It is has been known as a steel working centre since 500BC. Toledo steel being unusually hard, Toledo became a source of weaponry for Roman legions, renowned for its design, manufacture and ergonomics.

Seeing Toledo for the first time is breathtaking. I explore the city and some specific sights of interest to me during the day while Anthony rests in the cool air conditioned room. Then we go out together in the evening for a spot of sightseeing and dinner – we are loving the long summer nights and gentle sun setting light. But what happened to the end of holidays?! This place is so full of tourists. The number of Toledo steel sword shops and tourist junk shops is so overwhelming, I do not even feel like stopping to admire the workmanship.

I know of El Greco’s paintings so seek out the various places that hold some of his works. And I have read of the turbulent history of the site of the current Cathedral de Santa Maria, which had a church in 587, then a mosque following a Muslim invasion in 711-788, then the mosque got converted to a church in 1088, then finally the new cathedral foundations were started in 1226. The walnut-wood stalls in the choir were the most exquisite I have ever seen. I am glad I chose to take a self guided audio tour of this incredible cathedral. Three hours later, I manage to escape the huge throngs of tourists and enjoy losing myself in the twisty and steep streets of Toledo.

But it is HOT and I look forward to a late lunch of fresh bread and Iberian ham in our hotel room with Anthony. That evening, we go into Toledo together and get a taxi to take us on a drive around the city – I had planned on doing it on foot but it is 39 degrees still at 7pm! What a sight.

We now have a longish ride to Granada but we don’t mind as we have 3 nights booked there. And it is a hot ride – thank goodness for our vented trousers.

We arrive at our hotel hot and tired and grateful to find motorcycle parking spots across the road from the hotel, thus saving us €15 a day parking.

I knew the Alhambra was not to missed and thought it would be interesting to have a guided tour to learn more of the fascinating story of this magnificent palace. My mistake: I didn’t check the size of the group. 30 people and 2 languages. Much too big for the audio equipment which crackled if you were more than 5 metres away from the guide and for moving around the place and see what the guide was talking about. Apart from the frustration of not hearing most of the commentary, moving like swarms of ants around this place made us wonder how we are going to manage tourism across the world over time. This place for example is at capacity. Virtual 3D tours do not provide sensory experiences – like smell of the wood, or the plants, the coolness of some of the rooms or courtyards. We know we have been spoilt with our travels recently, especially across the Stans and Iran and our memories of these and our new experiences in Santo Domingo de Silos, Granada and Toledo clarify what type of travel we wish to seek out in future. We would rather seek out more Santo Domingo de Silos places – small places with their own story and history and places with simply or primarily locals. For example, we actually enjoyed seeing the Taj Mahal with thousands of people because the majority of these people there were locals, visiting for religious or cultural reasons. The tourists were a minority.

Despite the tourists and the poor audio, we are glad we visited the Alhambra. It is an impressive series of three palaces contained within an old fortress dating back to AD889. It was rebuilt in the 13th century by the Moorish emir of Granada then converted to a royal palace in 1333 by Yusuf 1, Sultan of Granada before becoming the royal court of Isabella 1, queen of Castille. The muslim art and architecture is stunning. We recovered from the madness of the crowds and tour groups walking through the gorgeous gardens of the summer palace, known as Generalife, built in 1302 – dare I say, a highlight of the tour for us, as were our walks through the Alhambra park surrounding the Alhambra. 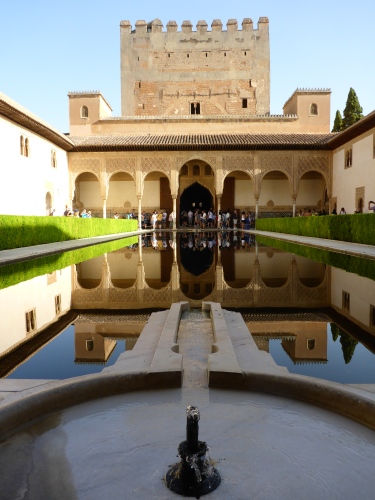 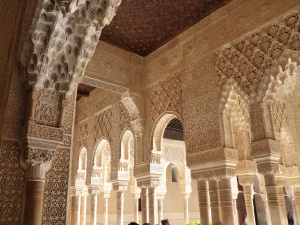 Our favourite time in Granada was after a walk around the back of the Alhambra took us to a beautiful quiet spot with locals enjoying the cooler time of the day – 2 guys playing guitar together on one bench and a couple of benches along, a young couple enjoying time together. The next day, we enjoyed walking through the non touristy part of the city and finding ourselves a hairdresser.

Our next stop is Alcaucin, a tiny village between Granada and Malaga, where we are staying with friends we first met in Peru and stayed with in Ecuador who now live in Spain. It is a beautiful ride. It feels good, despite the heat. We are in deep Andalucía. The rolling hills are stunning. The roads perfectly twisty for motorcycle riding. After a high pass, and long twisty road down, it is time to ride up the steep and narrow streets of Alcaucin. Oh yes, we make a couple of wrong turns (the gps can’t adjust its direction as finely and quickly as these tiny streets require) but we finally find their home. 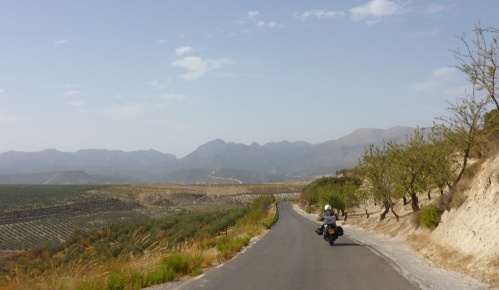 We are treated to fine food, Ecuadorian and Spanish delicacies, a cooling swimming pool, a fantastic guest room, our first washing machine load in 10 days, great fresh drinking water from fountains in the village square that comes straight out of the mountain, a drive to the local market and a swim in the ocean at Torre del Mar and best of all lovely long chats for good friends and like minded travellers. Thank you both!!

While we are with our friends, and following our experience in Toledo and Granada, we decide to change our travel plans – we won’t be staying in Cordoba next but travel there for the day from Seville in 4 days’ time…

8 comments on “Heading to Andalucía”