Our departure from the UK was dampened, from my perspective, by a nice little hospital grade virus picked up courtesy of the Emergency Room at Ashford Hospital where we were waiting with Anne’s mother for seven hours or so. I was lucky enough to pick up some of the bugs being coughed up by others. I guess that the warm cramped waiting conditions in some of the UK’s NHS hospitals Accident & Emergency (A&E) will create repeat business, although they do not seem to need it from the numbers waiting there.

I need to be mindful of such places as in my case if these viruses take up residence, it seems to be for a prolonged period of time. I spent some time recovering isolated in a French hotel room to avoid infecting others on a combination of antibiotics, steroids and paracetamol. Not the week I was planning but we have to be adaptable so there I am.

Still, both Streak and I are fixed and we can start heading south for Spain. While this trip is so much shorter than the last, it is no less an adventure for us. We really enjoy the open road regardless of where it is.

First stop will be Tanzac a small village some 90km north of Bordeaux where Bob and Magali, friends of Anne’s since university days live. As they are hosting some 30 plus people for their daughter Joelle’s 30th birthday party, we will be camping. This will be the first time since we camped at the Buffalo Chip campground at Sturgis motorcycle rally last year in the USA. I hope we have everything for the tent as some of our planning for the trip has turned out to be sub optimal. 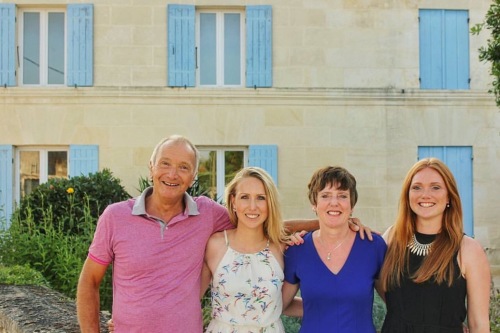 You would have thought that with all our experience of motorcycle travelling we would be expert packers. For some reason we both backed too many clothes holiday/beach etc which we have remedied. I also realised that the knowledge of loading maps onto the Garmin GPS had dissipated in the last two years and I must document the process in future if I do not wish to spend hours of frustration trying to recreate what I had previously learnt.

A couple of things I have decided after the somewhat shambolic approach to this trip that I adopted is that I will create an inventory of equipment and spares stored with the bike, not just rely on memory and we will take all electronic equipment ie Garmin GPS, Sena S20 etc back to Australia and prepare maps, updates etc in the comfort of our own home where we have the time to get the setups right.

GPS sorted, we rode the backroads to Tanzac from Nantes to avoid the monotony of freeway riding, longer but more enjoyable. Interestingly, every time we came across traffic congestion, cars would move to the right and create a space for our motorcycles to pass. Such courtesy, more countries should adopt this approach. Anne saw recently a suggestion that parents should teach their children to count all the motorcycles they see while driving. This will lead to an awareness of motorcycles when those children get behind the wheel one day. Good thinking!

Tanzac was relaxing with pool time and party time. After a night under the stars, we were refreshed for our southward journey. We switched to the autoroutes as being the last Sunday of the French holiday season, the roads would be clogged with northbound traffic heading home to Paris. We wanted to avoid the impatient drivers who would look for any passing opportunity, with us as the oncoming target!

Southbound traffic is light and we make good progress to our next destination Saint-Jean-de-Luz, a small seaside town a short distance south of Biarritz. Here, we are staying with an old friend of Anne’s family who have a place there. This is not a region I am familiar with and am looking forward to spending a couple of days close to the ocean. While motorbikes abound and we pass greetings with many, few seem to be women riders. While the number of women riders has grown in recent years, the ratio of female to male longer distance riders I think is still small. At one rest stop, we meet Veronique. She is French and on her first long distance trip in France, having only taken up motorcycling in the last year. She and Anne chat about motorcycling, long distance travel and her concerns about breaking down, not having any mechanical knowledge of her bike and a number of riding technique issues. Anne mentions that we had no technical knowledge either prior to setting off on our RTW trip, but her being a lone woman rider, Anne understands it is a different feeling being stuck on the side of the road alone so tries to reassure her that if she was to break down, she would find many people stopping to help. Anne admired her courage to set off alone despite all those worries. It is good to be sharing stories with fellow travellers again.

Our arrival in Saint-Jean-de-Luz is challenged by the multitude of one way streets. I am sure somewhere in town is a place with no-entry in all directions! Our free GPS maps from OpenSteetMaps do not have this level of detailed information, but we safely navigate to our destination near the centre town.

Here in Saint Jean de Luz, as in Mont Saint Michel and Nantes we see squads of four armed soldiers, not policemen, on patrol. A reminder of recent events in France being taken seriously, but if this is taking place all across France during the holiday season, the impact on military resources must be significant and ultimately not sustainable. We understand the State of Emergency in France will continue until January.

Two days in Saint Jean de Luz allow us to relax and chill out in this holiday town. The atmosphere is low key, very French and enjoyable. We partake of coffee, lunch and dinner each day with gentle strolls in-between. A little online research on Saint Jean de Luz following our first visit to town where we saw a statue to the corsairs who raided British sailing ships for the king of France, revealed that the town had hosted the wedding of Louis XIV and was an evacuation point for the Polish Army in France in 1940. Today it is so easy, thanks to the efforts of others who have documented so much to quickly find information on almost any topic on the internet.

The Pyrenees peek above the rooftops to the south beckoning us, so tomorrow we will celebrate the 42nd anniversary of Anne’s and my first meeting in France, by riding across Northern Spain. We are so luckily!