Sunshine greets us for the first time in days as we head south from David and Leslie, their wonderful hospitality still fresh in our minds. We head south with Cañon City as our likely destination today. Swiftly we travel down I25 to Colorado Springs, passing the US Airforce Academy (USAFA) which Anthony is certain will not allow visitors in today’s security conscious but I spot the visitor’s hours, so we turn back, and pass the offramp for Cheyenne Mountain Air Force Station, of Cold War and movie fame. Surprisingly, the only security check consists of handing our Australian driver’s licence (which has our name and our photo) to the guard at the entrance, who looks at each one briefly and hands them back and off we drive through the vast USAFA grounds. It surprises us that it is so easy for us to get in, nothing written down, nothing checked. What incredibly huge and scenic grounds the USAFA is situated in. It is one of 580 sites put forward at the time of choosing a suitable site for the Academy and was selected as such in 1954. The graduation of the first cadets took place in June 1959. And the first class of cadets to include women entered in 1976 and graduated in 1980.

Sign on the road leading to the US Air Force Academy

B52 at the US Air Force Academy

We head to the tourist centre which is a good few miles from the entrance gate. After visiting part of the museum which explains the ranks new graduates go through, we watch an interesting film on life as a new recruit during their first year. This is when we learn why they are so brutally waken up every morning, with loud banging, shouting and pounding on the doors: this is how you are likely to be waken up in real life, in case of bomb, attack or other emergency, so get used to it. We see how new recruits are ‘broken’ and ‘built up’ again over their 4 year course. It reminds me of what I learned from my nephew: they break you because when you are at your lowest, your true nature comes out. And that’s when you find out whether you have what it takes to be an officer.

Where we have lunch, we see a very interesting display on the Tuskegee Airmen: a group of African-American military pilots who fought in WWII. Because the US military was still racially segregated at the time, these airmen trained at a separate university and air field. They were flying escorts for heavy bombers and never lost a bomber they escorted, although 84 Tuskegee pilots lost their lives. Interestingly, and sadly, the Tuskegee airmen were some of the best pilots of their time because of their training and personal drive to be accepted for training and it wasn’t until 1949 that black airmen were allowed into the formerly white-only units.

We also visit the stunning USAFA chapel, which has sections dedicated to different faiths.

We stay in a cheap motel in Cañon City and head towards Gunnison on US Route 50. We get to Salida again, stopping at the Royal Gorge – very touristy but worth seeing. 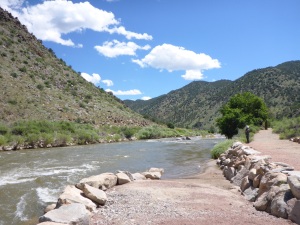 A stop along the Arkansas river

As we approach Salida, large storm clouds are looming so decide to have lunch where we had breakfast a week ago and wait for the storm to pass. 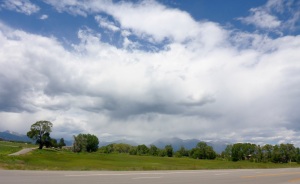 After lunch in Salida, will have coffee somewhere and wait this one out

An hour later, it is still raining, so we head into the old Salida and find somewhere for coffee. That is when I notice wires hanging from Anthony’s bike: BMW Denver, when they serviced our bikes, didn’t bother returning the cables where Anthony had them carefully wrapped and tied under his ‘tank’ cover and they have worked themselves loose…

Storm passed, time to move on. US Route 50 has some stunning stretches. We climb up to Monarch Pass, at over 3,445 metres (or 11,300ft), and cruise down towards Gunnison, along Tomichi Creek. 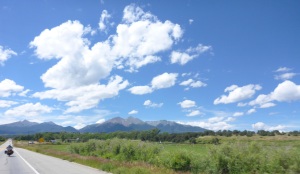 We get to Gunnison around 4pm. All hotels are full, so camping it will be. We recall seeing a number of Klim banners, they made our motorcycle jackets, as we entered town at one of the inns so we decide that we will try the hotel there.

We meet Tonia and Katie, who are running an Adventure Rally Series event on behalf of motorcycling magazines including Dirt Rider, Cycle World and Motor Cyclist. This is an event over three days, limited to 100 participating riders working in teams, that tests their motorcycling skills and gives them the opportunity to explore central Colorado. Tonia quickly offers us a place to pitch our tent and then invites us to be her guests for the evening, how generous of her and how lucky we are!! 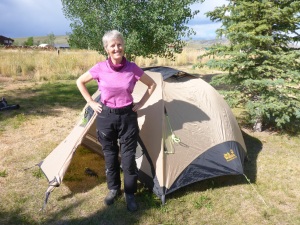 Our camping site behind the Inn at Tomichi Village outside Gunnison

It is hard to describe the evening as we met so many kind and interesting people. Offers of accommodation from Domenic and Petra, Ned who offered us use of his room and shower at the inn, gifts from sponsors such as Chris from SBS who gave us T-shirts, gloves and brake pads, and Justin from Butler Maps who gave us 3 maps designed by motorcyclists for motorcyclists: these state by state maps highlight and provide information on the most scenic and beautiful riding within the state, with detailed maps of each route, colour coded depending on grade and skill. Riders had travelled from far and wide across the USA. These maps are great for anyone touring the western US and looking for scenic routes – check out http://www.butlermaps.com. It was such a pleasant and interesting evening with simple, friendly, fun and open likeminded souls. The final prize was fun. Participants were asked to who has an interesting to share: the first one described how he rode for a half a day operating by hand an adjustable wrench which replaced the gear shift lever sheered off by a tree root. The 2nd explained how he broke a Ducati electronic key on a friend’s bike (irreplaceable at short notice), and that friend hot wired another key via the light wiring. The 3rd one to put his hand up told how he spent the first 2 days of this 3 day event in prison: on his way over to Gunnison, his expensive bicycle was stolen outside his motel room. He called the police who, after getting his details, promptly told him he was under arrest, handcuffed him, threw him in jail for 2 days – all because he was supposedly in contempt of court for failing to appear in court 24 years ago when his wife filed for divorce, but he had moved interstate and never got the notice. He won the prize. 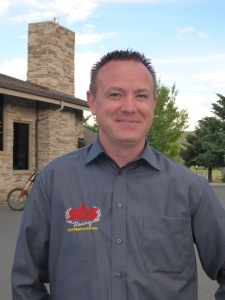 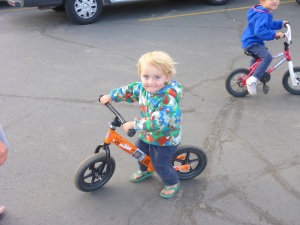 Justin’s starting early on a KTM

A slow rise and pack the next morning from Gunnison, we make a leisurely and short route to Montrose where we find a great little motel as the afternoon storm is building fast – we prefer to stop early, avoid the rain and leave at the crack of dawn tomorrow. Time for shower and machine wash our clothing there.

Leaving Gunnison, on US50

Running along the southern side of the Arkansas river 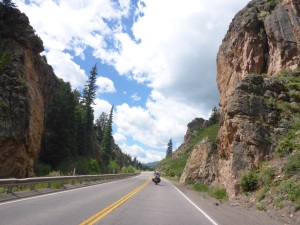 Along US50 near Cimarron

The first G1 section of our new map (perfect biking road) which we covered was the ‘Million Dollar Highway’, so called due to the cost at the time. Part of US Route 550 runs over 40kms/25 miles from Ouray to Silverton, through the Uncompahgre Gorge via the Red Mountain Pass at 3,358m/11018ft altitude. An absolutely stunning road. We stop at Silverton for tea and coffee, watch a steam train arrive and book ourselves on that train ride for tomorrow.

San Juan Mountains with Mr Abraham in the distance 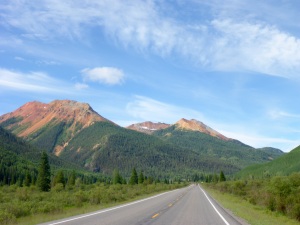 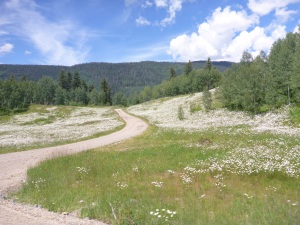 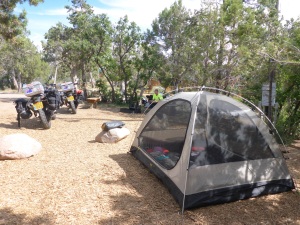 Our campsite outside Durango

We stop in Durango and set up our tent at the KOA campground for the next couple of nights. Not our favourite type of place to camp but the managers there have added some lovely features like fresh herb garden which we can help ourselves to, fresh pizzas made to order and delivered to your tent!!! See Anthony’s next post for commentary, photos and video on that train ride.