We are greeted by a blue sky and sunshine after weathering tropical storm Bill, the second cyclone of the season originating in the Gulf of Mexico. Yesterday saw almost 4 inches or 10 centimetres of rain in Bob and Pam’s rain gauge. We leave Fort Worth having made new friends and learnt a little of its history and culture thanks to Bob and Pam.

As we leave, evidence of the downpour can be seen in the dirt and gravel washed onto the roads. Every river crossing we make has milk chocolate coloured water flowing strongly, the rivers have burst their banks over the surrounding flat areas.

We are riding on US287, a cross country route that has turned out to be an easy 4 lane highway with a 75 mph speed limit. This means we are about the slowest, just keeping up! So no potholes but we still have to concentrate as the traffic, including trucks and mobile homes stream by. 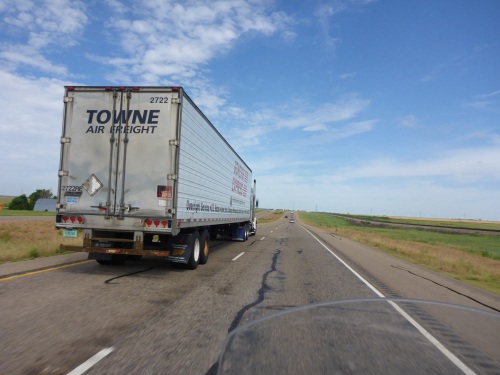 Trucks just fly past us…….

Our first fuel stop, outside Wichita Falls, is just across the road from a large Harley Davidson dealer, a great place for a coffee break. 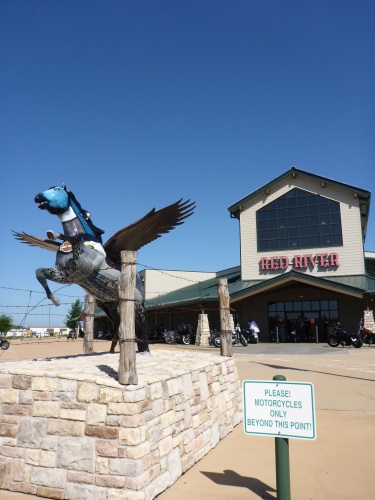 just for us bikers.

Only motorbikes beyond this point, what a great idea that we have not seen before. We wonder about the vast interior, with every possible accessory for the bike and the person surround us. Good thing we have BMW’s. In the coffee lounge we meet Richard and Helen, a local couple, Helen is the editor of the local HOG chapter’s newsletter. Richard, who will be 80 in a month or so, has just traded two wheels for three and has a beautiful new HD trike. 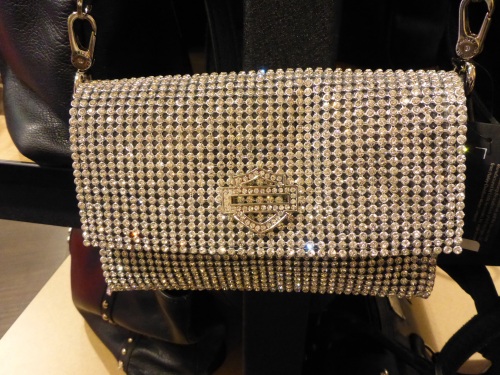 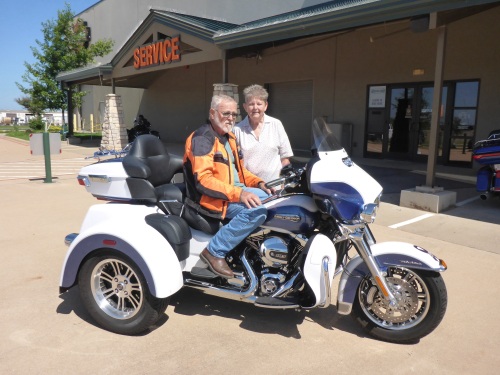 Richard and Helen with their HD trike

They are a lovely couple and the next thing we know, we are invited to lunch with them. A coffee break turns into a three hour stop. This is the joy of travelling. We spend lunchtime learning more about the USA, its people and its politics.

Texas rolls by, we pass many nodding donkeys producing oil, gas well pads and cattle, all Texas staples and the basis of economic development in Texas. While we were in Fort Worth, we would see pairs of the latest F35 fighters wheeling in the sky above. The planes are built by Lockheed Martin at their Fort Worth plant. These fighters will be seen in coming years in both the UK and Australia. Business in Texas has come a long way since the original cattle drives up the Chisholm and other trails from Texas to the Kansas railheads. 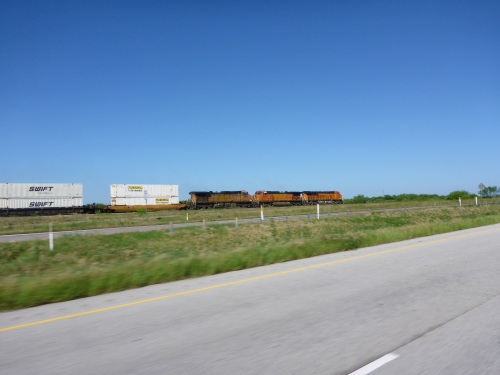 We have not set a schedule, so our first night turns out to be in Childress. As we are preparing Streak and Storm for the night, Anne notices that Streak, her bike, is missing a bolt, which explains a sound Anne heard while riding and thought was be a stone from a short dirt stretch of road under repair. This missing bolt is one of those holding on the upper crash bars. We are directed to ‘Lukes’ a surplus store in town. Here we find a store with everything from metric bolts in our size to cowhides with the brands cut out! Luke’s Surplus store since the 1960’s

We start to see Route 66, the famous historical road from Chicago to Los Angles, parallelling Interstate 40 as we move past Amarillo. This two lane road became known for being the route that, during the great depression of the 1930’s, many in the mid west used as a route to a new life in California. Replaced by Interstate 40 during the 1960’s and 70’s, the road and the bypassed towns lost much of their passing traffic and related income. Some towns seem to have been more affected than others. We ride through Vega, Anne spots a couple of interesting cafes as lunch possibles, we circle back make a make a stop at the Hickory Inn Cafe. 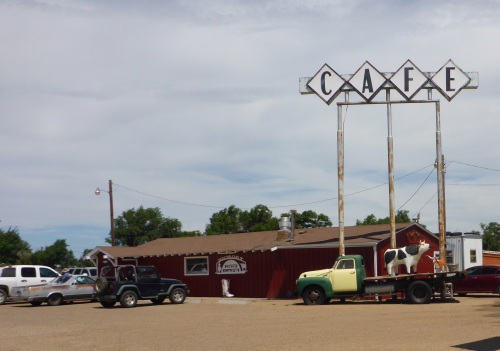 We enter to find the place full of locals having lunch. We grab a table and at the next table are a couple of lawmen, the local sheriff and a Texas Ranger. Only this morning I came across a web page on the Texas Rangers and learnt about their badges, made from Mexican Silver Peso coins, what a coincidence. Texas Ranger Martin T. Hood and Oldham County Sheriff David Medlin were happy to pose for photos with us They told us they had first worked together for over 28 years. 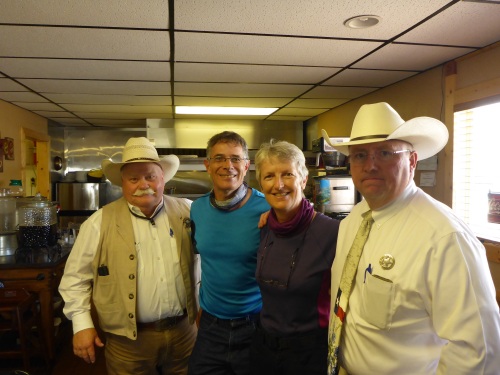 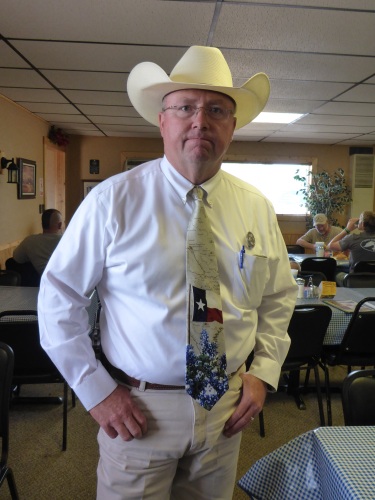 We press on, in the next town we cross the midpoint between Chicago and LA. The total distance of Route 66 is 2,277 miles or 3,666 kilometres. 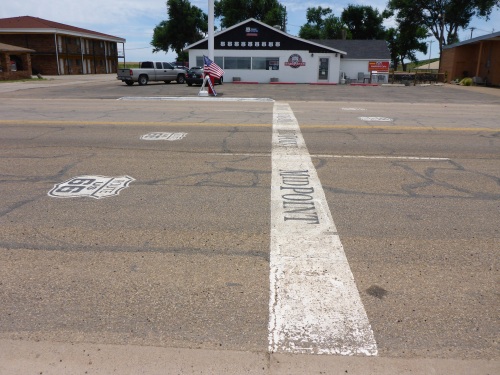 Soon after we cross the border into New Mexico, whose number plates read ‘Land of Enchantment’ as they did in 1980 when we first visited and fell love with the place. We are looking forward to our time here. 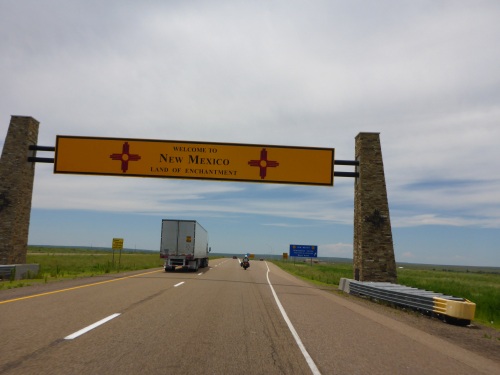 When we finally reached the USA I started to think that we would have seen the last of the new, interesting and unusual and that blog content would be drastically reduced. How wrong I was, the last couple of days have provided a wealth of new experiences and pleasure for us. Enjoy.

8 comments on “Across North West Texas”