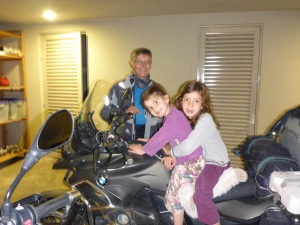 Today is election day in Mexico, so many roads in Mexico City are closed and Anthony wrestles with the GPS constantly working out a new route. We finally get onto the road out of Mexico City and are lucky to run under an overpass for a while, as…. it is raining!! We don’t get too wet and are soon out of Mexico City and into clear blue skies, but it is cold – in fact we have been cold the whole time in Mexico City. 13 degrees in the morning, up to 17 during the day!!! 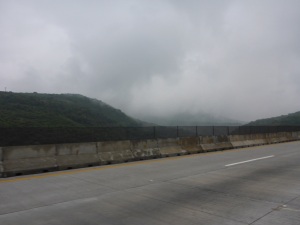 After a couple of hours, we pull over at a petrol station to get a hot drink and warm up. We meet Daniel, from Mexico City. He is on his way to Alaska and today is his first day! I am not sure who was more excited – him or us, for him. Then when we stop for lunch, we meet another biker, Herman, from San Luis Potosi. We spend a hour chatting with Herman. We love the motorcycle fraternity. There always seem to be an instant connection. And we love how traveling on motorcycles enables us to meet and talk to all sorts of people. Car drivers are intrigued and talk to us. This reminds me of a most interesting conversation I had with young Gloria, at Alberto and Anna’s: she asked me so many questions about our travels, such as what happens when you are hungry, what if you couldn’t find any food, where do you sleep, how do you know where you’ll sleep, what happens when you run out of petrol. How can someone so young be so insightful?! 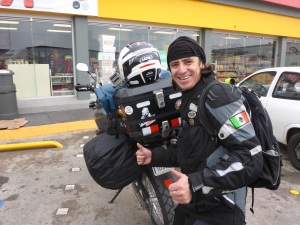 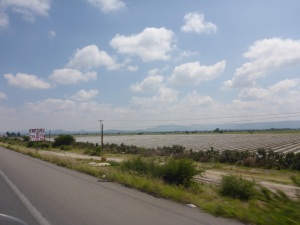 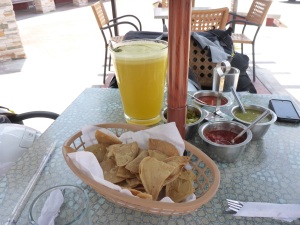 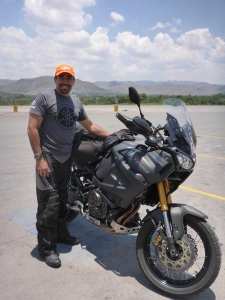 We meet Herman from San Luis Potosi at our lunch stop

There is a supermarket near the hotel so I head off after checking to buy some snacks for our dinner. I thought I would get Anthony a beer as a surprise, but that was not possible: 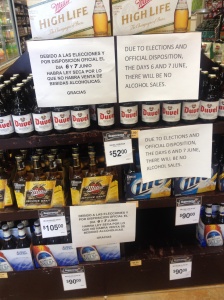 No alcohol can purchased on election week end in Mexico

From San Luis Potosi, we head to Monterrey … 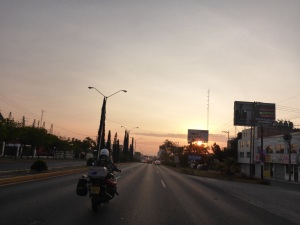 Leaving San Luis Potosi at 7am 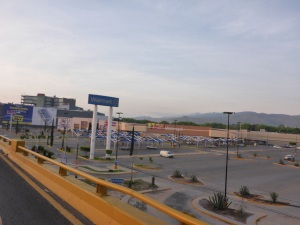 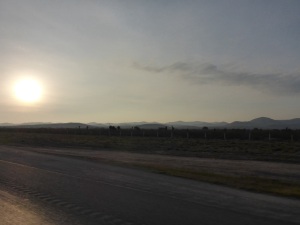 Heading to Monterrey, Mexico, an hour out of San Luis Potosi

We’re on the road again and loving it! 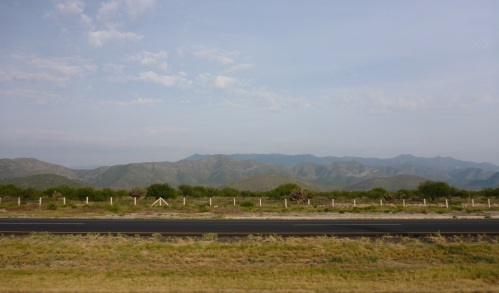 Restaurants along the road to Monterrey

Half way to Monterrey 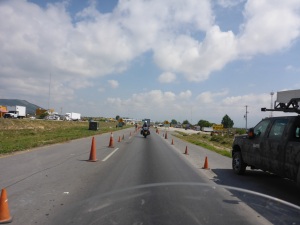 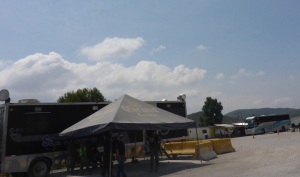 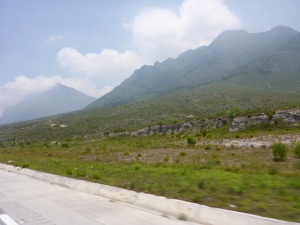 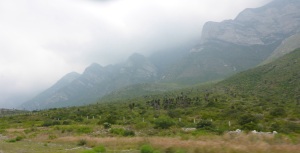 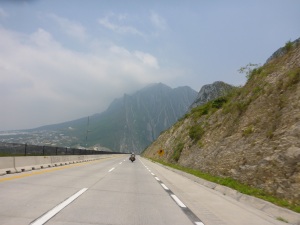 On the outsgkirts of Monterrey

We head straight to … BMW. Streak has developed a squeak. From what sounded like a slight seat groan as I sat on it when we left Mexico City, it has gradually sounded worse. On the road to and then once in San Luis Potosi, we both had a good look and both agreed that it was coming from the suspension area but sounded like plastic squeak rather than metal. An over enthusiastic clean at BMW may have removed any lubrication maybe? We did some research online, sent off a query to one of the motorcycle forums, got a response and left confident the next morning. But as there was a BMW at Monterrey, I wanted someone to confirm there was no structural problem. There we met Juan Carlos, a BMW customer, who became our interpreter. BMW immediately took Streak away, confirmed our suspicions, lubricated the area, ran a diagnostic test on the whole bike and told us we were good to go but will have to have the shock absorbers replaced at our next service. What a relief. 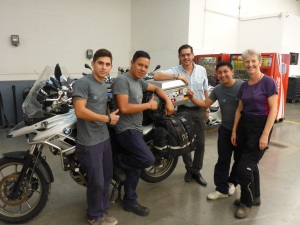 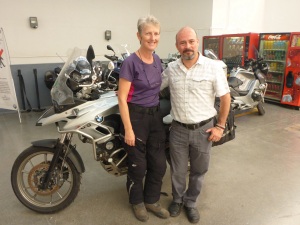 We then head to our hotel which is on the otherside of town, for an easy exit the next morning: Juan Carlos offers to show us the way which is very kind and helpful so we follow him until we are safely on the right road to our hotel. We have our last meal in Mexico in a small restaurant close to the hotel. We are presented with free dips, salsa and chips, as is the tradition here. Those salsas can be so hot that one tiny corner dipped is usually plenty hot enough for me. This one comes with a lovely smooth guacamole. Anthony tries it first, taking a good scoop of it onto a corn chip. Eeek, that is green chilli, not guacamole and it is HOT!!!!

Our ride from Monterrey to Laredo was stunning and so enjoyable. But maybe it was because it reminded us of Cape Town, where we lived from 83 to 85… And the temperature was perfect: a balmy 23 degrees at 7am. As we go through a hilly area, a large cat comes out and runs across the road right in front of Anthony, close enough for him to hoot at it to scare it off the road quickly. It is not a house cat but a bobcat. By the time I get to it, it is amongst the rocks, looking straight at me so I get a good look at it too. Pity I didn’t manage to get to photograph it… 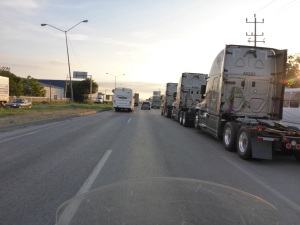 New trucks heading for the US from Monterrey 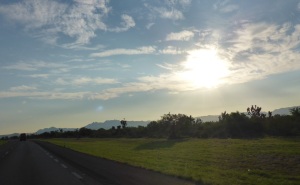 Another glorious morning as we leave Monterrey 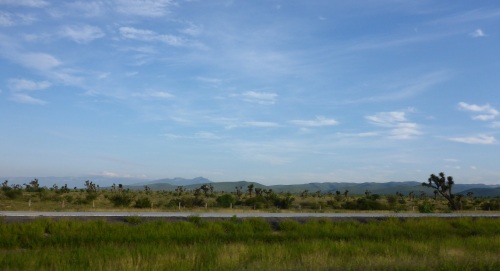 An hour north of Monterrey 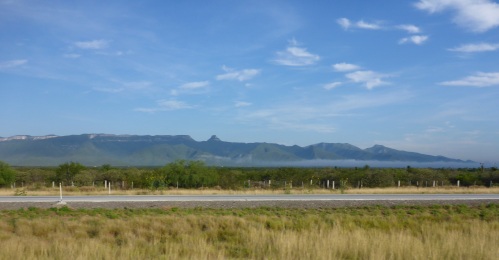 An hour north of Monterrey, reminds us of Cape Town again 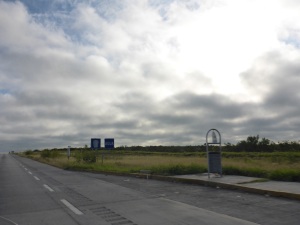 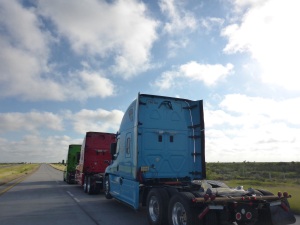 More new trucks heading to the US

We are now approaching the USA – the number of trucks increases and the road surface resembles good quality US concrete roads. We have really enjoyed Mexico, Mexicans and Mexican food. Definitely a place to return to one day…

18 comments on “Heading to Laredo”