Our first full day in Panama City and we decide to go to the Panama Canal Miraflores Visitor Centre. I was looking forward to seeing this world famous canal, one which my mother went through when she travelled by container ship to visit us in Australia.

About to learn all about the Panama Canal

What I hadn’t counted on was how utterly fascinated and inspired I would be at seeing it and watching vessels pass through over the next 6 hours!!! Maybe it was because of the recent difficulty we had had on finding a way to cross the Darien Gap and get to Panama? Or knowing how many people died trying to cross the Darien Gap and building the canal. But the importance of the Canal was suddenly clear: I felt like it was allowing the life blood of the shipping world to flow, a connector for the entire world in fact. Building the Canal was a monumental engineering feat.

Here are a few facts: the Canal opened in 1914 and connects the Atlantic and Pacific oceans across the Isthmus of Panama. It is 77kms long and 25 metres above sea level, the level of Gatun Lake which feeds the system of locks. The canal enables ships traveling from New York to California to trim 13,000kms off its voyage by bypassing the tip of South America. Between 30 to 40 ships use the canal a day. On average, it takes a ship 8 to 10 hours to pass through the canal. While moving through it, a system of locks raises each ship 85 feet above sea level. Ship captains aren’t allowed to transit the canal on their own; instead, a specially trained canal pilot takes navigational control of each vessel to guide it through the waterway. As the ship enters the lock, the ship is guided by 4 to 8 engines on tracks to make sure the ship doesn’t collide into the canal walls. It is absolutely incredible to see these huge ships gliding through the locks, with so little spare space, the engines attached to cables slowly pulling the ships along the locks. There is a size called Panamax, the maximum width and length allowable for ships to use the canal.

And here’s a brief history of the canal. The idea for a canal across Panama dates back to the 16th century but a survey ordered by Charles V determined that the construction of a ship canal was impossible. The first serious attempt at building a canal didn’t start until the 1880s by the men behind the Suez Canal and the Eiffel tower. The project was plagued by poor planning, engineering problems and tropical diseases (malaria and yellow fever) that killed 20,000 workers and the excavation proved more difficult than anticipated. The company was declared bankrupt in 1889. Sadly Eiffel retired from business after being accused of fraud and mismanagement of this project.

America originally thought of building a canal in Nicaragua but thanks to some intense lobbying by Philippe-Jean Bunau-Varilla, one of the French engineers who had been involved in the failed French project, who convinced American lawmakers than Nicaragua’s volcanoes made it too dangerous but they should rather buy the old French assets. Although the US congress approved the purchase of the French assets in 1902, Colombia, which Panama was part of, refused to allow the US to build the Canal. The Panamanians revolted and declared independence and negotiated the Hay-Bunau-Varikla treaty which gave America the right to a zone of more than 800 square kms in which it could construct a canal, a zone to be controlled in perpetuity by the Americans. Well, not quite because, after some riots in 1964, then a number of political negotiations and treaties, Control of the canal was transferred peacefully to Panama in December 1999, and the Panamanians have been responsible for it ever since. The canal took 10 years to build, during which time 5,600 workers died, mostly due to accidents rather than tropical disease. The canal is currently being expanded to handle today’s megaships, up to the “New Panamax” size limit, and cargo vessels carrying nearly three times the amount currently accommodated. They won’t however be super-sized enough for the world’s largest cargo ships such as Maersk’s Triple E class ships, which measure 60 metres wide and 400 metres long!!

Interestingly, a century after the United States completed the Panama Canal, a navigable link across Nicaragua remains a possibility: in 2013, a Chinese company announced it had struck a $40 billion deal with the Nicaraguan government for the rights to construct a 275kms long waterway across Latin America’s largest fresh water lake and finally broke ground to start building the access roads in December 2014. Sadly, the Nicaraguan government has stated it does not have the funds to conduct an environmental impact study and I fear the construction of this new canal will be disastrous for Nicaragua ecologically…

Here is a selection of the 300 photos I took of the canal:

Boats of all sizes use the Panama canal

Tanker in one lock… 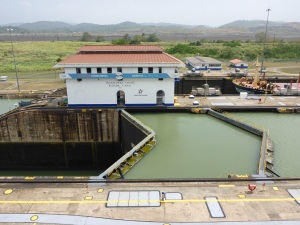 …time to move to the next set of locks 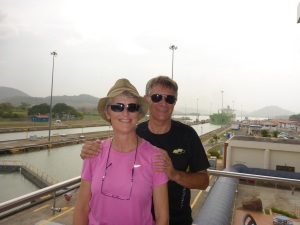 Tankers nowadays make full use of the Panamax limits 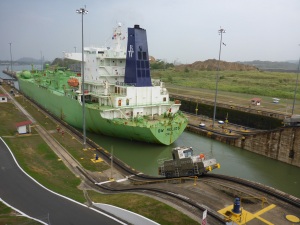 LPG tanker is now in the last lock, Panama Canal 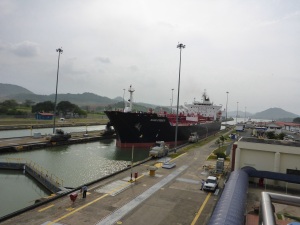 Condensate tanker being guided by trucks along the lock, Panama Canal 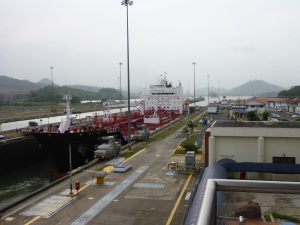 I told you I was completed fascinated and inspired by this canal!!! And this road sign made me smile:

The next day, we took the metro to a large shopping centre to buy new camera flash cards before heading as close to the old city as we could before walking. Panama city is full of contrasts. From the shiny and clean business area to the more run down commercial area and suddenly, from one side of a set of traffic lights to the other, you are transported to a different world. The old city has been beautifully restored. There are many empty facades, boarded up for future renovations. Although it was lovely to admire some of the old buildings, that part of town was surprisingly soulless. There were just a handful of local and overseas tourists. No cafes or restaurants to sit and watch the world walk by as there was no-one. Very odd. We eventually walk into the only restaurant we had noticed earlier that was open and had lunch. Perfect timing as the heavens opened up shortly after. 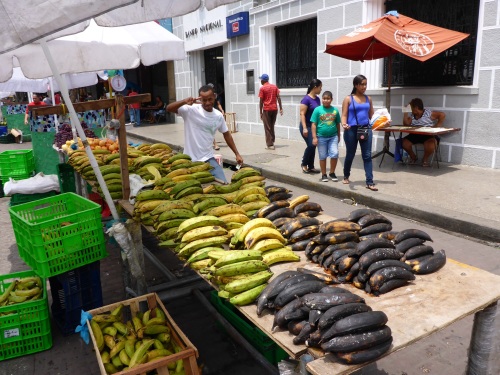 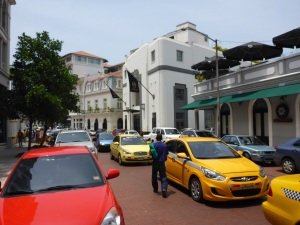 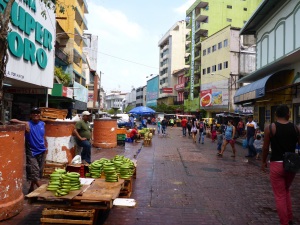 I really wanted to get a closer view of one of the towers I had caught a glimpse of when we first arrived. I thought of the stunning Turning Torso of Malmo, Sweden, but this one didn’t have the same elegance or finesse. Interesting nonetheless.

Panama City with the Revolution Tower in the centre

It meant quite a bit more walking and getting completely drowned on our walk back to our hotel – I am lucky Anthony is always so accommodating, especially considering his ankle is still constantly aching…

19 comments on “Surprised to be so inspired in Panama City”