We arrived in Santiago some 2 weeks or so ago with plans to head north through the Americas for New York. Here we are some 1,500 kilometres south of our intended departure point! Just goes to show, you need good geography and some flexibility when undertaking a trip of this nature. We have decided that we will run back mostly up Ruta 40 to Mendoza then across the Andes to Santiago by the third of March. Long days riding will be required but we have built in a spare day into our calculations for any unseen incidents. 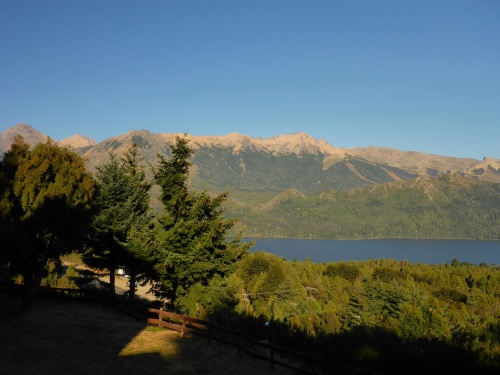 San Carlos de Bariloche in the morning from our hotel 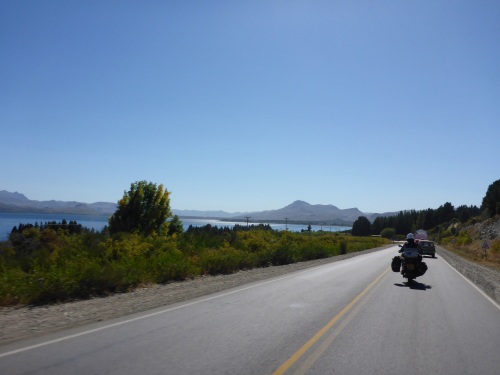 The open road beckons and we are off, our route will take us away from the Andes heading for Zapala and beyond if possible today. Refuelled, we leave Bariloche behind and soon find ourselves running parallel the Rio Limay, the river that runs from the lake at Bariloche into the Rio Negro and the waters then flow in the South Atlantic Ocean. 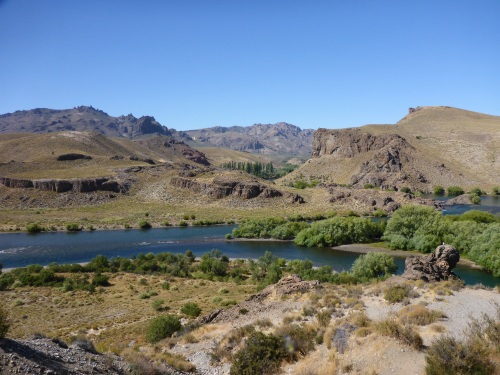 Rio Limay an hour out of Bariloche on the RN 37

As we watch large inflatable rafts negotiate very gentle rapids, I muse that drifting lazily down this gentle looking river on a large raft for a few days could be a very pleasant experience and one I would enjoy. For another time perhaps.

Confluence of the Rio Limay and Rio Traful

Onwards we press and as we leave the river behind and swing north we are exposed to a strong and persistent gusty headwinds.

Heading towards Zapala on the RP47, battling strong head winds

Both our higher screen and Cape Town riding experiences stand us in good stead as we are constantly buffeted about. For those of you not familiar with Cape Towns weather, strong winds from the Antarctic blast the city on a regular basis. We spent a couple of years living there and our follower(s) from Cape Town can comment further, as I presume that coming out of the city at hospital bend where two freeways cross and Table mountain’s protection finishes is still as interesting as ever.

We average about 400km per 16 litres of fuel and this has been pretty consistent throughout the trip. Usually we average higher if our speed is a little slower than 100 kph / 60 mph. Fuel stops are few and far between, plus Zapala is only 375km from Bariloche. My low fuel warning light comes on while we are about 50km from Zapala with Anne’s warning light following a few kilometres later. This is the first time this has happened to us. I recall that this means about two litres reserve left, the manual states 2.7l, so about 50 to 60km if we ease off a little. Anne gets four kilometres before the bike starts stuttering, a little recalibration required here please BMW.

We have just passed a police post, so Anne turns around to limp back and wait for me as I will continue on to Zapala, fill up our spare 4 litre fuel container and return. I am able to add just under a litre to my tank as our camping stove also uses the same fuel. This was a deliberate choice on our part. I ride as smoothly as possible, freewheel where I can and make it to Zapala. I coast into the petrol station to be told to join a queue in a side street. No chance, I tell them I will wait till the cars in the queue have passed first. I am not risking pushing the motorbike as I suspect I am very close to empty. Fuel tank 16.00 litres, filled 15.62 litres. That’s close enough for me.

Back to Anne who has spent the time talking to the local policeman, who tells her I will have taken the opportunity to do a runner and will not be back. I think he is disappointed to see me. 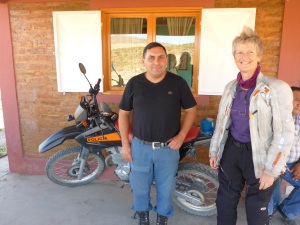 We stay at one of the few hotels that also has a casino. The town has at least two we have seen, but the casinos seem to attract no customers. We can only assume that some benefits must have accrued in constructing them.

Our next decision is which route north from Zapala. Our maps show a scenic route starting some 10 kilometres or so north of the next town of Las Lejias which links back up with Ruta 40 just south of Chos Malal. We are unsure as to which way to go and as we are pulled over in Las Lejias a battered Ford F150 pulls over. The driver is a motorbike rider and confirms the beauty of the scenic route, provides some detailed instructions of which roads to follow and we understand that we will only have 10 kilometres of ripio to cover. Great news.

We follow his advice, and for those interested in looking on the map it RN21, RP26, RP27, RP21 and finally RP4. RN21 and RP26 provide an all tar route over a mountain pass to Caviahue which is the town for the Parque Caviahue ski area. It was interesting to see the higher quality of the houses here compared with the average houses in the towns and villages we had passed through. Ski home owners have money. As a remote summer destination, not many places are open, but we find a fantastic cafe that does great pizzas overlooking the lake. The charming english speaking owner, who swapped teaching for cooking, puts the thickest layer of non cheese toppings on a pizza I have ever seen. I could not think of a more idyllic place for lunch. 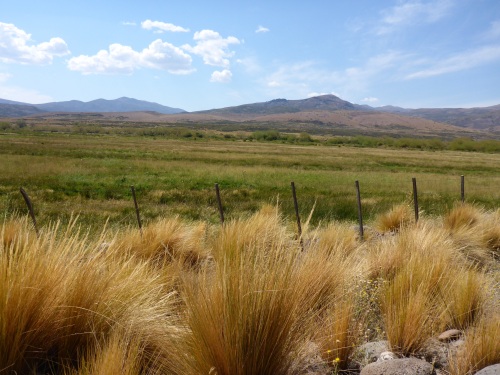 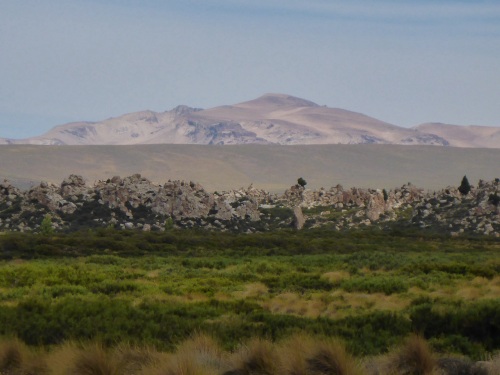 Heading towards Copahue, the rock formations are amazing – this is not a rock wall in the foreground but a long crest 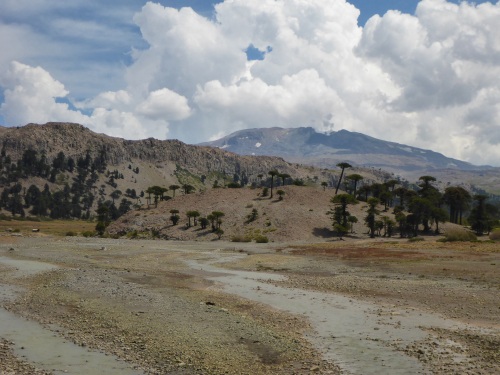 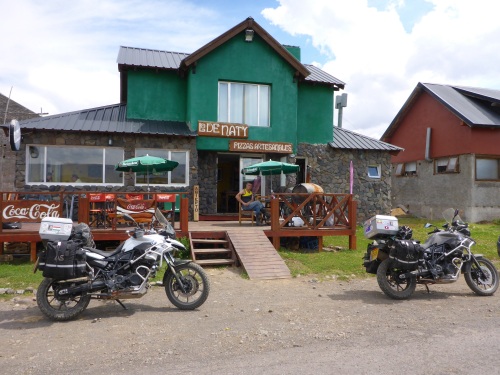 Had an amazing pizza at Caviahue on the RP26

We now head off down our 10 km of ripio, err….seems to be going on and on and on! Neither of us are comfortable on this surface, mostly due to lack of experience. With a high proportion of loose gravel on the surface we seem to loose that nice connected feeling we have on tar. I think it is harder for Anne as she has a better sense of balance and feels the movement more acutely. Still as we progress over the 10,20,30,40 km of ripio we gain confidence. 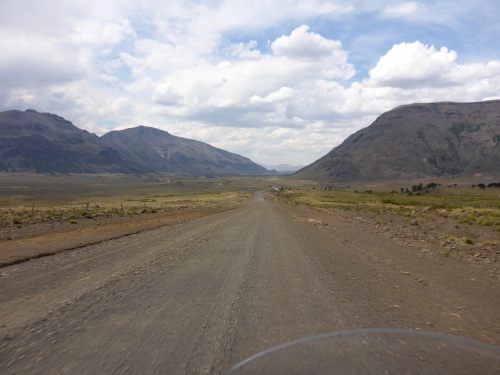 Running along the Rio Agrio 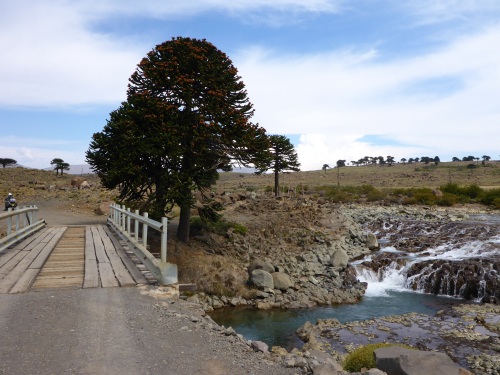 Crossing Rio Agrio on the RP27 after Caviahue 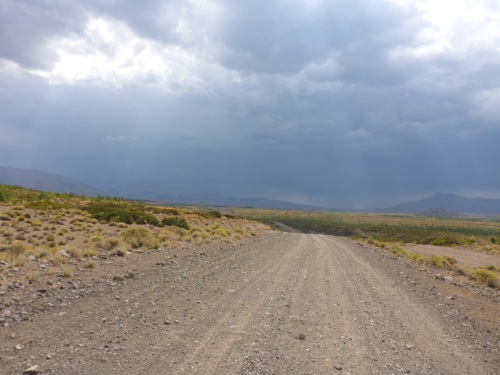 This storm has been getting bigger for the past couple of hours – will we escape it?

As in many mountain locations afternoon storms can develop. Here is no exception and as jagged streaks of lightening hit the ground ahead of us, a sensible stop is called for. We finally reach tar again, only some 120 km of ripio, enough for today thanks, but all good experience. Anne feels that she has gained confidence today, even enjoyed the last hour’s riding on dirt – this will stand us in better stead for the parts of Bolivia where no tar alternatives will exist. 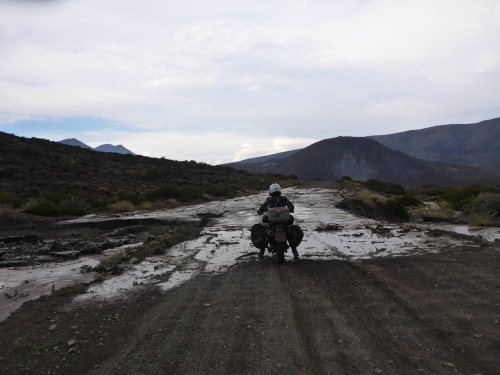 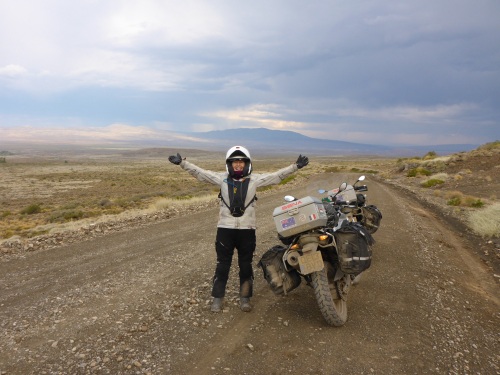 Out of the storm, not far to go now and Anne is feeling fantastic 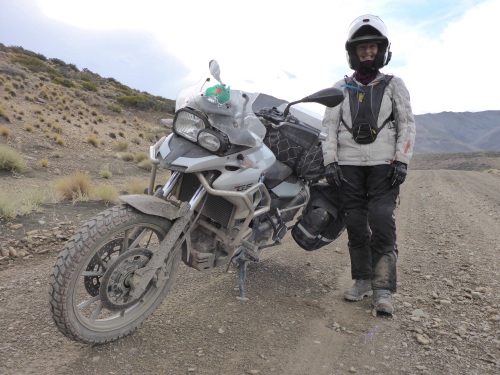 The 4 of us will need a good wash tonight! 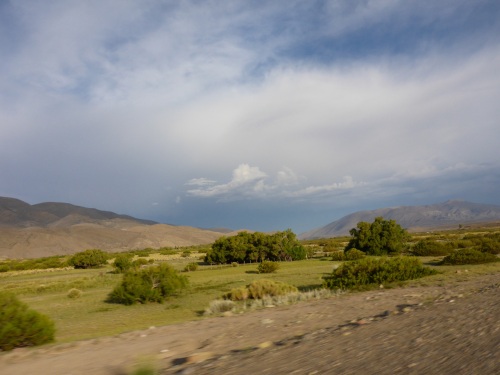 Gorgeous lighting after the storm as we approach Chos Malal

What a great day!