And so we arrived at Indira Ghandi Airport after a 3 hour flight with budget airline Flydubai. It is 4am and 28 degrees. We only have 2 small bags as hand luggage so are able to leave the airport pretty swiftly. We walk past all the taxi touts, looking ahead, towards the official taxi line, somewhere… ah, over there! One pesky tout doesn’t leave us and we eventually give in. Mistake # 1!!!! We know that now, not then. He walks us over to a waiting car. We give him our hotel address which he passes onto the driver. I look at the driver’s face and as we are about to leave, I ask our tout, through my window, whether our driver knows where we are going. The answer is no!! So our tout gets into the car too, to make sure we get there ok. How kind of him!!

As we get close, we drive through a number of Delhi Police road barriers until we can go no further. We ask around. There is no way through. It’s festival time here from tomorrow and many roads are closed. We call our hotel which we had booked the day before we left Dubai, so just over 24 hours ago. I am told that the hotel is closed because of holiday here. But I only booked yesterday. Well, you’ll get your money back I am told. Great!! Lucky we have a helpful driver. He will take us to a travel agent. But of course, good idea, why not. It is now 5.30am and the travel agent is open for business. Welcome to India!! Where everything is possible and normal…

After some friendly banter, telling us how difficult it is to find accommodation at the moment because of the festival, he miraculously finds a hotel for us. Brilliant! And off we go with our taxi tout and his driver. We arrive at the hotel at 6.30 am, time for 2 and a half hour’s nap before heading off to the bank and Myanmar consulate. The hotel is nothing flashy but it has working air conditioning and looks clean enough. We put our heads down and Anthony falls asleep in a flash. I follow quickly until ….. Ouch!!!!!! Something is biting me! I flick something that feels about an inch, 2.5cms, long. It hurts. It really hurts. We switch the lights on, search for the culprit but he is long gone. It is not long before I have a huge red patch where I have been bitten. Anthony eventually gets back to sleep. Impossible for me. My muscles are cramping with pain. Lucky it bit me above my right breast and not the left or I might have wondered whether the pain was not for a more sinister reason.

Time to get up at 8.45am and get into our booked taxi by 9am. It doesn’t show up so by 9.20 we get into another one… Today is the last day we get a chance to apply for our Myanmar before a 5 day week end!!! We can drop off our application between 10 and 11am only. But before we can lodge our application, we need to get a bank draft for the cost of the visas – cash is not accepted. We have to go to the local bank which opens at 10am only. Get the picture?! So after filling out 2 applications, I join the Myanmar consulate queue, outside a tiny window on the street while Anthony goes to the bank, letting various other applicants in front of me as I keep waiting.

Anthony returns with the bank draft at 9.50am. My turn comes up, the consulate officer, behind the tiny grilled window, whose face I can only see if I bend sideways, tells me to come back in 5 days. I feign shock and ask whether I can get it this afternoon. Why so soon? Because Delhi is too expensive, I don’t want to stay here that long and I want to get to your country. He smiles and says he’ll do what he can and I should return at 4.30 today. I tell him that we are traveling with the Icelandic man who was here before. The red passport. He remembers. We should all come back at 4.30pm.

Time to get back to the “travel agent” via a pharmacy first as the damned bite really hurts then a road-side vendor for some breakfast.

We explain my encounter with my night visitor and our wish to check out and find a better hotel. We are offered breakfast – a bowl of lentils and beans, quite nice albeit awfully oily. Eventually, they have found a room for one night only. Fantastic. They are checking rates for us. An hour later, we have had enough. I really have had enough. Why is it taking that long to get a rate if they know they have found a room for one night? Finally, yes, they have found a lovely place for us for 4 nights – we see the pictures of this modern business hotel. Here’s a photo of the street corner 2 buildings away from our hotel. 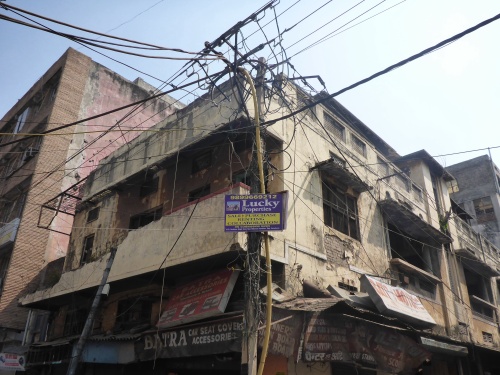 We shower and rest for a couple of hours before heading back to the Myanmar embassy. It was the fastest visa process ever: we got our visas within 12 hours of arriving in the country and 5 and a half hours after lodging the application. Absolutely fantastic!!!

This hotel is clean enough we think at first sight, the air conditioning works really well but it is not what the pictures showed. It is awfully noisy because of it’s design and construction, (staff bang walls, drop buckets, slam doors, shout, drag furniture across the stone floors), shower leaks all over the bathroom floor, stinky bathroom. But the worst was finding that finding a strip of paper stating that “this toilet has been sanitised for your protection” means nothing – it has merely been placed there, over fresh pee on the toilet seat. When I called reception about it, the guy merely wiped the pee with his fingers…

It is BAD and yes, we have been ripped off badly. Conned in a big way but because I was so unwell after my bite and we just accepted what they offered at the price they quoted having toyed with us for an hour. Mistake # 2. Ripped off? In a big way as we found out we could have booked this hotel online at half the rate but our Indian sims took 24 hours to get activated so we had no internet access… And we paid 4 days in advance. Mistake # 3. After much discussion with our “travel agent”, we got one day back, and a driver for the day to take us to various sites yesterday. Not good enough but more than enough energy spent this and time to move on…

Had a good night’s sleep though, despite the noise and woke up pain free.

The buffet breakfast is the biggest farce – see below:

Buffet breakfast – not quite!

Order from the menu, wait 50′ and receive each item wrapped in foil because it has come from somewhere down the street = toast is soggy and cold etc etc. All the dish warmers are empty, juice containers empty etc…

With this really bad taste of having been ripped off so badly, neither of us was too interested in the various tourist sites we were taken to. Even though we were taken from place to place, and we hardly had to walk, we were drained. This place is totally draining. The noise is constant. Everyone hoots constantly. Everyone wants a piece of you. But you are invisible when they want to get somewhere and you get pushed over. The stench on the streets is awful. The poverty is hard to see. People sleeping on the streets in the clothes they are wearing and absolutely nothing else. This is going to be hard for us to witness and ignore… But much harder will be for the country to rise out of this level of poverty – how will they? We think of China and how they managed to raise the standard of so many millions of people so quickly… One has a communist regime that decides how things will be, the other a religion where one has to accept one’s fate… We are so lucky in our society thst we can both chose our politicians (even if we don’t like our options) and our beliefs yet so many of us are unhappy…

I remember being told by someone we met in Africa over 30 years ago that Africa was like India: you either love it or …

I am working hard on my attitude towards this place. I have to, I know, but it is difficult.

Today is Mahatma Ghandi’s birthday and the new Prime Minister of India Narenda Modi launched Clean India Mission in Delhi. It was great to see scores and scores of school kids and other groups working on this mission. They have a massive job and we can only hope that kids involved in the clean up will have an influence on others to reduce littering. 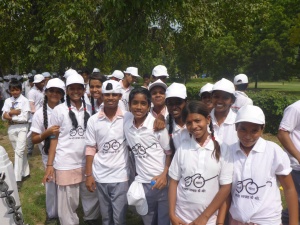 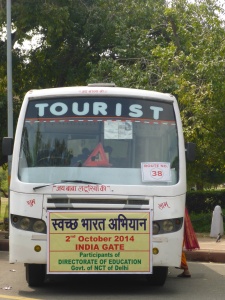 Clean India mission – one of the dozens of coaches

I absolutely love this massive sculpture – what an inspiring man he was! 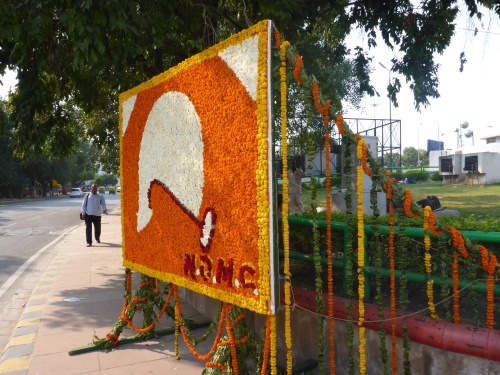 Flower tributes to Mahatma Ghandi on his birthday, found at most roundabouts in Delhi

Outside a small temple in New Delhi

Tonight was a end of a major festival, Navaratri, celebrating Mother Goddess, culminating with Dussehra, the victory of good over evil. It also marks the end of a 9 day fast. The streets and various venues will be very crowded. You have to be careful we are warned. It’s too good an opportunity to see some live culture so why don’t we go I thought. So we take a tuk-tuk and the driver reminds us several times to be careful of pickpockets.

Wow, the colour, the noise, the happy faces. It was fantastic. But the crowds were huge. And the entry/exit points very few (only 2!!) and very narrow. How are we going to get out of here: we are in an enclosure. I am not good in confined spaces as it is… I managed to stay there for 1 hour and a half then, as more and more people poured in and started pushing to get forward, I just had to get out. That was just in time!! There was suddenly a stampede to get into the enclosure to get closer to the fireworks.

Everything is colourful at Ramlila ground festival, Delhi

Love the mixture of cultures 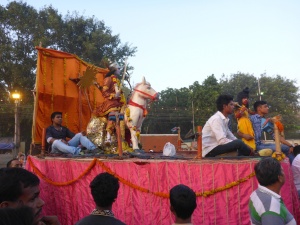 Floats have been parading down the streets of Old Delhi before arriving into the Ramlila ground, Delhi 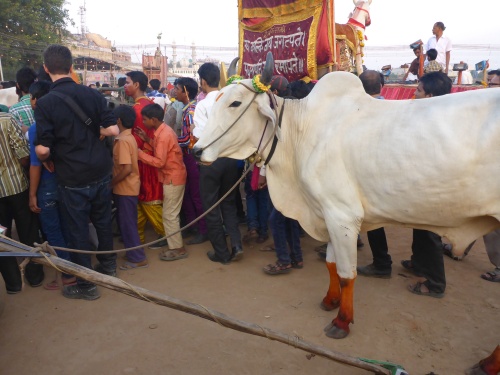 Fireworks are starting at Ramlila ground, Delhi – time to get out of the enclosure

Tuk-tuk back to our hotel and time to upload photos of a great evening.

Tomorrow, we go to the airport and start the process of clearing customs and being reunited with Streak and Storm. Then we have to reassemble them!!

More when we know where we are off to next because, believe it or not, we have absolutely no idea where we are going to next!!! That is quite a nice feeling actually but one thing is certain, we will not be staying in Delhi a day more than we have to…