Tashkent, or Toshkent, a large sprawling city with both a new centre and old heart and a silk route city. As we have ridden through this region following sections of the silk route we can only wonder at the courage and fortitude of those who travelled this way centuries ago linking the diverse cultures of east and west bringing trade and ideas to other cultures.

We have been lucky enough to choose the Uzbekistan Hotel, which turns out to be situated on Amir Temur square. We gain a large room overlooking the square, 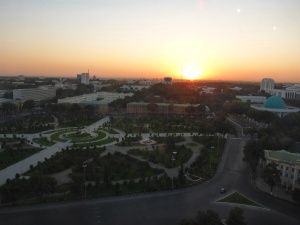 named in honour of Amir Temur, also known as ‘Tamerlane’, who founded the Timurid dynasty.

The mighty Amir-Temur, on the square named after him, Toshkent, Uzbekistan

This soviet era building towers over the surrounding low level buildings, probably as it was intended to do for visiting dignitaries from Moscow. The park was remodeled in 1993, a couple of years after independence. Given the focus of statues on historic Uzbek rulers and leaders before the Russian invasion in 1865, we wonder what the landscape in Tashent looked like prior to 1991 from a sculpture and statue perspective.

A surprise to us is the number of large trees and gardens that line the avenues here. In what is a fairly dry environment, the grass, trees and plants seem to be continually watered. It creates a lush and cooler environment, which we see is not reflective of the whole city when we explore further afield. The size of the trees indicates this must have been done many, many years ago.

Visas are our priority here, we must get the Turkmenistan visa, which we need to submit the paperwork for and we have an appointment at the Indian Embassy after Anne made an online submission from Bishkek. At the Indian Embassy, we are informed that they only issue one month visas valid for one month from date of issue. This does not work for us, they offer two months but that still does not work. Anne’s six hours of work is for nothing, we will have to try again later in the journey, probably Teheran. We are discussing this with an Uzbek guy who works for a German company, and he explains that for him to visit head office in the European Union, he needs to provide documentary proof of employment for his parents, and all his siblings! We should not complain about visa requirements, given what we ask of these countries’ citizens.

The taxi system in Uzbekistan cities is based on a fleet of official yellow taxis and every other car as well. Put your arm out, cars stop, check if they are going in your direction, you negotiate a fee and off you go. Probably never wait more than 30 seconds for a vehicle to stop. Of course they may lack seat belts and airbags which we are used to back home. We have also seen that the drivers do not check the amount of money you give them, they accept you will deal honestly with them.

On by taxi to the Turkmenistan Embassy, but it’s closed half an hour early, back tomorrow. To get on the list to enter, we are advised to arrive at about 6am as the numbers of people seeking visas can be large.

We return to the hotel to find three wedding parties in the lobby, with the attendant video and still cameramen. We are puzzled that there seem to be few guests. It turns out that while the hotel is popular for weddings, many couples come here for their video and photos, then go on to their reception elsewhere. Yes they pay for the privilege of having the photo shoot. Uzbek weddings at the hotel’s banquet hall can run up to 650 guests.

The heat has made us glad we have an air-conditioned room to retreat to in the middle of the day, we have found that in 35 degree plus temperatures we lose interest in tourist activities. What is nice though is that we have not seen large numbers of tourists as this is a low season due to the heat.

We arrive at the Turkmen embassy at 6am and there are already 3 people ahead of us! Our Turkmenistan visa application process started with our application form, downloaded from the embassy website, is one year out of date. Luckily the helpful staff provided new forms, helped us with the additional Russian language form. We ask for an express processing and are told to come back in one week, it’s two weeks for standard processing.

We have decided that since we have a week to wait, we will go to Samarkand for four days by train rather than wait for a week in Tashkent. We travel on the metro for the first time to go and buy the tickets. Opened in 1977, it features themed stations with high ceilings, wide platforms and amazing chandeliers. Not like the cramped Paris metro or London underground stations. One station is themed on Soviet space flight, unfortunately no photos are allowed and policemen can be seen at every station and on every platform, but Anne’s camera went off accidentally a couple of times, see the results below. 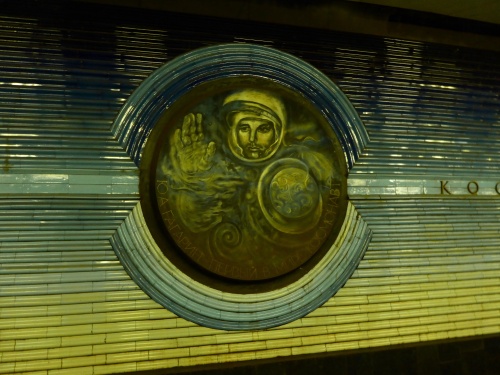 Visiting the Barak-Khan madrassah gives us our first view of Tashkent history. We find it down little back streets not on a main street as the new buildings are. We meet a few children skateboarding on plastic bottles, the eldest gives Anne a wreath of leaves to wear. 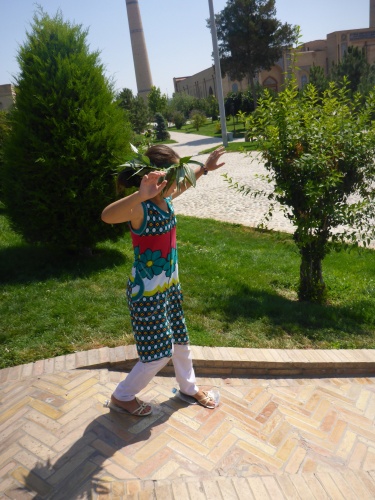 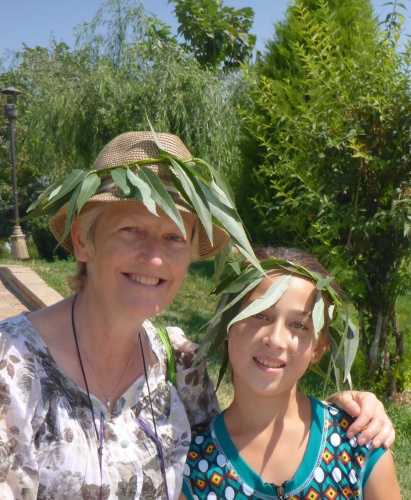 After I asked whether I could take a photo of her skating, she offered me one of her head bands – too sweet. In Toshkent, Uzbekistan

We had not made it to a market so far on this trip, but decided that we would in Tashkent. The biggest market is the Chorsu. The section of the market we explored is primarily foodstuffs and we were able to stroll down rows of spices, vegetables and fruit. We were however given fruit to try, and handfuls of vegetables from friendly stall holders. 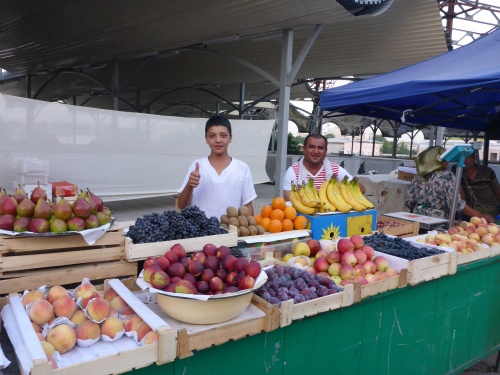 This vendor and her son were so sweet – I loved her eyes and gold teeth too. Chorsu market, Toshkent, Uzbekistan

We buy some sweet grapes that look like small olives and the stall holder keeps giving us more and more for what seems like a very small price. We talked with one group and discussed motorbikes, children or lack thereof in our case and how young they thought we looked. They always want to know age, married and children. We said because of no children and they understood the youthful looking aspect, but not why we had not got children. The discussion was in Russian, English and sign language. We would have gone further into the market, but we already had two carrier bags full of fruit and veg! It was interesting for us because we did not have the motorbikes with us, so that was not the reason for their interest in talking to us. The Uzbeks are a genuinely friendly people.

As you will have seen from previous photos, money comes in big bundles, with approx 2300 cym to the US $ and mostly only 1,000 cym notes everyone carries large wads of money. Supermarkets and shops have counting machines, you hand a wad over and then deal with the discrepancy. No idea why the country does not have more of the larger 5,000 cym notes except that they only started printing them in 2013. This picture shows 2.7 million, the payment for a wedding reception. 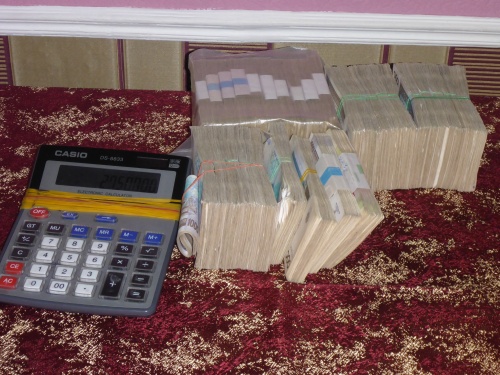 2.7 million cym for a small Russian wedding reception of 50 people at the hotel

Official process here is very important: to get a Uzbek SIM card for my phone, to upload photos to the blog, hotel WiFi is useless, I needed no only my original passport, but my specific hotel registration card. Let’s just say that not being used to such specific requirements and not being able to use copies resulted in a number of trips back to the mobile phone store.

Off to Samarkand next where Anne is looking forward to a cultural and visual feast. 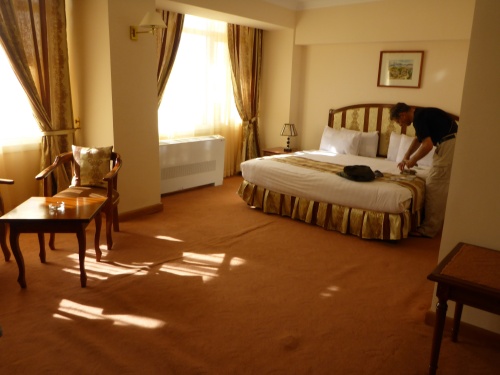 Our ridiculously huge room at the Uzbekistan Hotel, Toskent, Uzbekistan 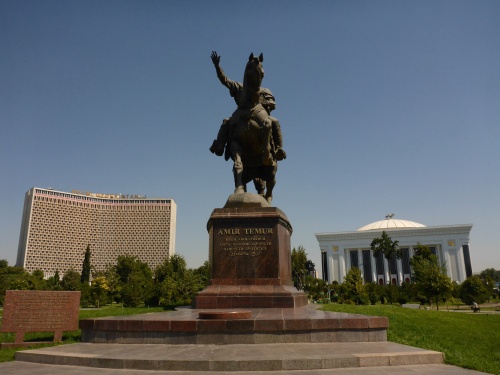 Amir Temur square, with our hotel to the left and the Forums Palace to the right, Toshkent, Uzbekistan

Anne’s first drink since we’ve been on the road, Anthony’s beer and a wad of cym 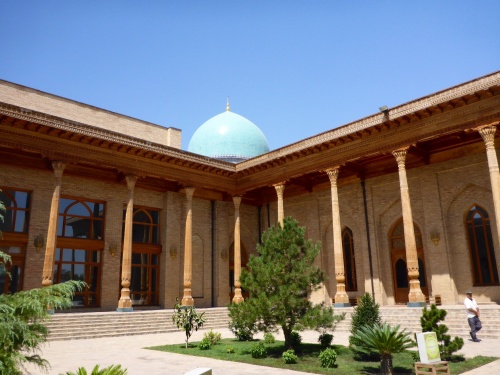 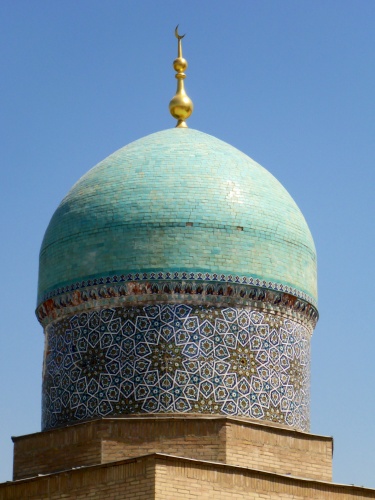