They say “When in Rome, do as the Romans do”. We never thought we would end up driving like Russians but we did…

It took us 3 days to get from 50kms west of Moscow to Samara, to cover 1100kms. The last couple of days’ riding, since the last blog entry were hard. We hadn’t covered as much as we had intended the day we left Moscow for all sorts of good reasons, but that put the pressure on us to cover a fair amount of kms over the following 2 days. The pressure was worse due to the fact that we had just learned how extremely bad the road was out of Ryazan. I admit I was a little apprehensive about the challenge facing us the next day. Anyhow, we headed out for Penza (460kms away) nice and early to give ourselves plenty of time for the ride and numerous rejuvenating stops. 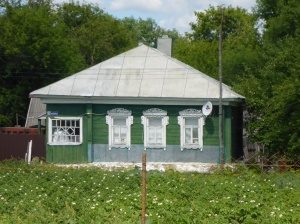 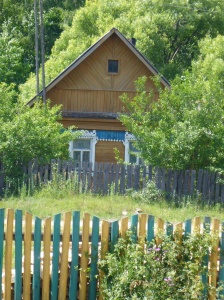 Another typical and beautiful Russian house

The terribly potholed and chewed up road never materialised!!! It had been mostly resurfaced or in the process of. We have worked out that we have chosen our time to travel through Russia perfectly, towards the end of summer, once most of the roads have been repaired from last winter’s damage. More luck on our side once again…

We made it to Penza around 6pm. Not finding a motel as we drove towards Penza, we decided drove around it and hoped for some on the other side. We found none, and eventually decided to drive into the city centre. Tackling rush hour traffic again was no fun. Eventually, Anthony looked up hotels on the GPS and picked one. Wow! Not the roadside motel we had expected but a flash looking hotel. We were so tired by then, it was perfect despite the price.

Quick shower, refreshed, we headed out for dinner and enjoyed observing Russians strolling along the city centre square and pedestrian areas. 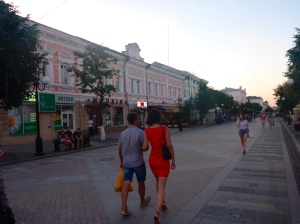 Penza to Samara was always going to be a tough day as we had another 450kms, also meaning we’d arrive, guess when… rush hour time again!!! And it was indeed thanks to all the road works and the length of extremely slow riding on roads that were being constructed. What made it difficult was the amount of traffic and especially the number of trucks in both directions, plus the inevitably fast cars always wanting to squeeze past you. Being sandwiched on all sides by trucks or cars who couldn’t understand why we’d leave a few metres between ourselves and the vehicle in front of us wasn’t very enjoyable. We needed that space to see the potholes, rocks etc. It would have been much easier if the traffic moved faster but the slow speed riding from our off course came in handy.

When the construction parts were over, every one sped off. The vast majority of drivers were very courteous, mad drivers, yes, but as soon as we moved over for them and indicated for them to overtake, they generally backed off a bit, then gave us a wide birth, then flashed the indicators to thank us. Trucks always pulled over for us. 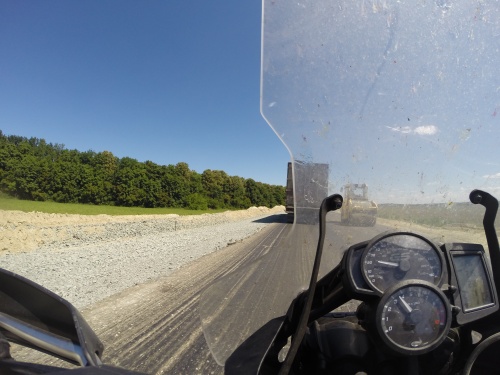 Those deep parallel groves can be unnerving on a bike

We both laughed when Anthony said to me: “do you realise what you just said?!” At the time, I was leading and while I was overtaking a truck, I told him “you can go, it’s only a car”. There was a car coming towards us, but the truck had pulled over to the side for us, and there was a single car coming towards us, with room for him and us. No problem. It happened all the time. Two lanes were regularly used as 3 lanes. We were now riding like locals. We understood the road rules. We also understood when the unwritten rules no longer applied.

That was until I heard a police car siren behind us. Oops, that’s for us… Here’s a photo of me with the police man after having discussed the finer details of Russian road rules and implications. There were 2 cops. One got out and they both told me to get into the car. Not sure about this (luckily, it was in town with lots of traffic around so it was relatively safe), I sat with my legs outside the car. After our discussions were over… Anthony asked whether he could take a photo of us. The cop I had dealt was happy about it and asked his older colleague to pass over his hat. He was not happy about this. My guy insisted, the older acquiesced eventually and handed his hat over. We all laughed as it was way too big for him. Not the older cop was instructed to get into the back of the car and his own over to him. That was much better, but he had another thought. He asked for his satchel to be passed to him. He got his batton out and handed it to me to hold for the photo opportunity. Absolutely hilarious!!!!!

On we went and got to Samara. What a relief. It was 4.30pm when we got to the outskirts, but didn’t get to our hotel until 2 hours later. Yes, rush hour again. Our clutch hands are getting stronger, but still hurt after all that walking pace riding. We got good practice with tackling potholes at slow speeds too. The roads here are interesting.