After a refreshment stop in Puros, which way now? We have multiple choices to get to Sesfontein, our next fuel stop, but mainly 2: canyon, passes and Hoanib & Ganamub river beds or shorter gravel D3707 through a plain? We have heard of the first ones but nothing about Giribes Plain. And after the stunning view last night and a less then optimal night’s sleep really in the car, we feel ready for something different as nothing could possibly surpass the beauty of the area we left behind – the Ongongo hot springs sound very appealing and the plain road will allow us to get there today.

What a fantastic choice – although I have no doubt we would have felt the same way wherever we went in this region!! What a stunning, vast and wild plain – with not a soul around – just one car going in the opposite direction all morning!! The vastness of it didn’t allow us to take any photos to do it justice.

Our drive off the main road towards Ongongo Gorge and hot springs was disappointing with many kids along the way shouting and demanding money. It didn’t feel good. After a few kilometres, we decide to give up and turn back.

Where to next then? After a lunch stop on the side of the road, we decide the road is so good now, we could make it all the way to Palmwag (pronounced palamvagh). Ooh what spectacular scenery again as we approach Palmwag.

But what a shock when we arrive at the lodge: people!!! Lots of tourists!!! Groups waiting to be hearded into the right direction by guides shouting to get their attention. Once again, many of those tourists either look dazed, exhausted and generally unhappy. Maybe they would be happier in a 3D theme park safari back home?? Our camping spot is well away from the luxury lodge and we have a fabulous view. We even spot a couple of desert elephants up the side of the hill opposite. How do they walk across those big rocks and pebbles that cover the land here?! Evidence of recent elephant visits around the lodge and campsites is everywhere but we didn’t spot any close by during our time there.

We take a drive through Palmwag Reserve the next day – the short loop we choose takes us three hours due to the rough terrain. We finally see our first welwitschia mirabilis which a friend in Australia told me about and we see on posters in all the national park offices, warning visitors to be careful with them: this plant which is depicted on Namibia’s coat of arms is only found in southern Angola and north western Namibia and is commonly referred to as a living fossil – some are believed to be up to 1000 years old. We did see many springbok, impala, oryx and many desert elephants. Sadly no leopard – naughty leopard, hiding from us and no doubt watching us drive by… It is only when we left the park through the north gate that the guard let slip that most of the animals had left the reserve due to lack of water…

Our campsite at Palmwag lodge 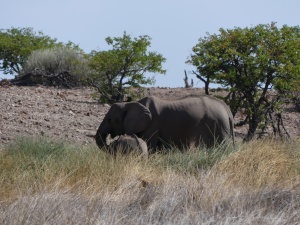 Onwards towards the Skeleton Coast we go. And we cross the Veterinary fence one last time then drive along it nearly right up to the coast. What a massive piece of infrastructure across the entire country. As we drive along the desolate Skeleton Coast, a heavy feeling envelops me – what is this? My heart is in my throat, my stomach in knots. The energy I am picking up is not pleasant yet I had been looking forward to seeing this area. This area got its name for a reason and maybe I am picking up past events here. Anyway, we are aiming for a camping area we were told about while on the Kunene river. 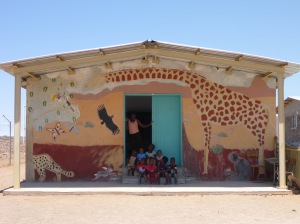 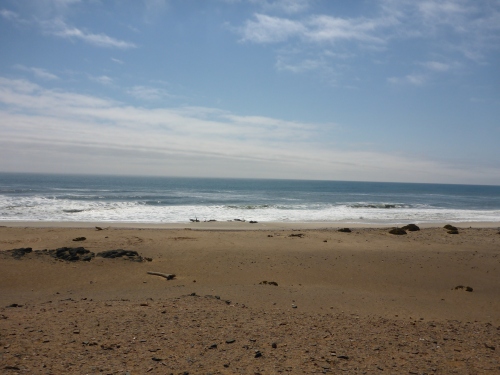 We turn off the main road south at about Mile 113, drive past many vast salt pans and arrive at our windblown destination, St Nowhere Spa and Campsite. The name sounds promising and intriguing. It will be lovely to sit in a spa bath as a change especially after our bone shattering days and less then optimal sleep last night.

St Nowhere Spa and Campsite is basically a fishing camp. We decide it is too windy to camp and not feeling like another night sleeping in the car, we opt for a cabin, of which there are 6. Anthony immediately has flash backs to his childhood, when he, his family and cousins used to spend summers in some big cabin by the sea. Happy memories. Our cabin has 5 bedrooms, sleeping up to 9 people, with one bathroom, a fully equipped kitchen and a massive freezer for the fish we are about to catch.

Freezer in our cabin at St Nowhere Spa and Campsite

One of our bedrooms at St Nowhere Spa and Campsite

The only other people staying at St Nowhere are all serious fishermen. What makes this place is its owner, Danie, with whom we chatted for a few hours. He first started with a salt mining lease. He had to mine and truck a minimum of 15,000 tons a month. Sadly, when the price of oil went up, there was no profit left. He decided to hand his mining concession back. The local government pleaded with him to see if there was anything else he could do in order to keep his staff employed. He thought of a fishing camp but not being sure it would be viable, asked for 4 years of free lease to give it a go. He made it worked and obtained a 75 year lease. That was 8 years ago. The salt pans are still there and some people come specifically to have salt baths for therapeutic purposes. St Nowhere is now a thriving campsite which has up to 650 people staying there during peak fishing times in December-January!!! He has built his own desalination plant there. While we were there, the low season with just 4 tents on the beach, there was a hive of activity with new ablutions blocks being built, old ones given a fresh coat of paint. There is so much more to Danie – what a character. He told us of the time he fought off a lion which locals tried to kill for taking one of his cows but only succeeded at making the lion angry by shooting it in the back leg. When Danie appeared, he was attacked by the lion. He says he instantly remembered a story he had read as a kid where someone being attacked by a lion put his forearm forward for it to grab. Despite the intensity of the situation with both lion and Danie staring at each other, the trick worked but thank goodness he was able to call out to his teenage son to shoot the lion in the head while it had Danie’s arm in its mouth. The puncture marks he showed us were impressive. 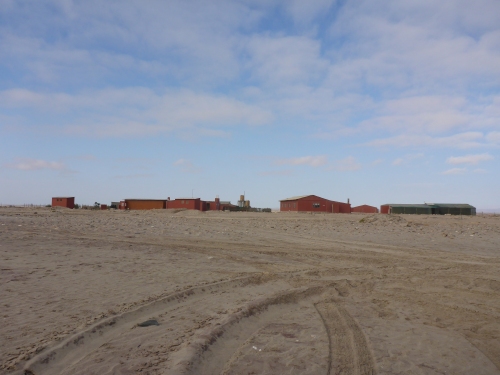 It was a privilege to meet Danie and inspiring see what can be accomplished with guts, integrity, determination and foresight. Once again, and as always, it is the people you meet along the way and the emotions they or places leave you with that makes travelling so fascinating. The Spa may not have been quite what I was expecting, it was better in so many ways and I leave St Nowhere Spa and Campsite energised – thank you Danie. South to Swakopmund we go.

10 comments on “Onto St Nowhere Spa”