A synopsis of plot for a mystery movie or why processing Iranian port exit paperwork takes 8 hours.

The traditional game of snakes and ladders takes you, depending on the roll of the dice, either scampering up ladders, or slithering down snakes. Your progress can differ completely from others embarking on the same journey. This is such a journey undertaken by two unnamed tourists.

The unsuspecting tourists awoke early, eager to progress the shipping arrangements for Streak and Storm, two thoroughbreds, onto their next destination. A taxi had been ordered for 07:30 to take the tourists and their thoroughbreds to the port and customs office in Bandar Abbas with a English speaking taxi driver, a retired Iranian navy captain who had assisted with ticket purchases and finding money changers the day before.

The tourists were a little concerned as to how the process would work as, two days previously on the advice of the shipping companies office in Tehran, they had been to the Shahid Rajaie Port Complex just outside Bander Abbas, which the tourists assumed was where the boat departed from, and where the customs officers had processed the carnet exit paperwork even though the departure date was a couple of days away. Very helpful they thought. On purchasing the passenger and bike tickets over the next couple of days, the tourists became aware of a second much smaller port nearer to Bandar Abbas called Shahid Bahonar, used for ferry services and which would be the point of departure and where they would need to again process the carnet paperwork, which had already completed 2 days previously at the Shahid Rajaie Port Complex.

Off they set, having had no breakfast, with the thoroughbreds arriving at 08:05 at the Shahid Bahonar port. They have a late hotel checkout at 3pm, plenty of time to complete the formalities and be back at the hotel in time for lunch.

Question: If you are importing 50 cars and the customs processing takes a day per car, how many cars do you import and how long will it take?

The tourists believe they will be meeting representatives of the shipping company at 08:00, who they were introduced to when they purchased the vehicle tickets. No sign of them on arrival at the customs offices, they are on their own.

The tourists enter the smoke filled bar, looking down from the steps, Sam is playing a piano in the corner, Rick the owner, ….Oh sorry wrong movie plot…. Back to the customs hall….

Further scenes will include:

Being directed in Farsi and hand signals to a counter and told to wait for the arrival of a customs officer who will handle carnets.

Meeting Mohammed, who works for a shipping company, repeatedly during the day as he tries to process his goods through the port. The tourists quickly realise that in the hustle and bustle of paperwork processing, it’s every, mostly men, for themselves.

Going to the photocopy store for photocopies of passports, Iranian visas and the outside and inside covers and the current country’s page of the carnet is required. This is undertaken at a small photocopying office just outside the customs building, payment required.

The tourists returning to the customs desk to be told they now need to return to the photocopying office to purchase two orange cardboard document folders to store their paperwork for filing as they are not provided by Customs.

Two handwritten letters in Farsi are written: they are taken for signing by a senior customs officer. For some reason he will not sign this and when it is sent for typing, the typing section will not type without a signature. This standoff is eventually resolved and six copies of the letter, in two different formats are typed and taken back to the original carnet customs officer for checking.

NO!!! one of the tourists will shout, as the carnet customs officer started to remove the next page of the carnet document, after having stamped them and explain again that the carnet exit was done at Shahid Rajaie Port Complex.

Back to port Authorities, a red from and yellow form is produced: the yellow provided to the tourists who have to take it and the carnet to a smartly dressed, mysterious senior customs officer who has magically appeared in the Port Authority’s building. He scrutinised the paperwork, signed on the back of the carnet, keeps the yellow form then appears to berate the Port Authority staff, says everything is ‘OK’ to the tourists and disappears. Will he return, will he stop the process? The tourists are confused but press on.

The tourists enter the dockside with no instructions, ride around and end up on the designated ferry, but have to get off to go to process, yes you guessed it, more paperwork. As time is running out they find they are missing a document, have to get back to checkout at the hotel.

There are a few more scenes but there is a happy ending to this story and the tourists and their thoroughbreds sail off into the sunset, well, darkness as it is 10pm before departure. 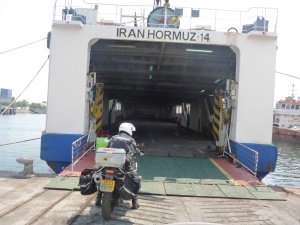 Our ferry from Banda Abbas to Sharjah – except we were not allowed to board yet! 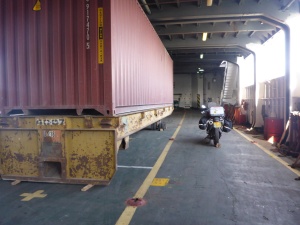 Streak and storm travel on either side of this container 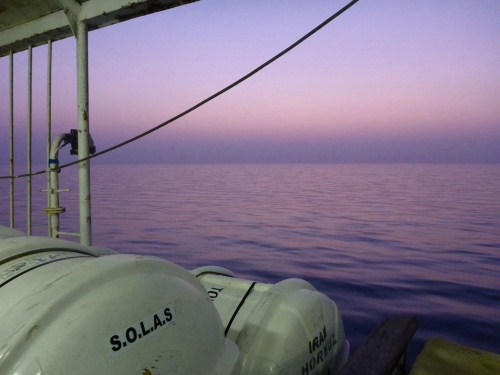 5 comments on “Plot for a mystery movie”